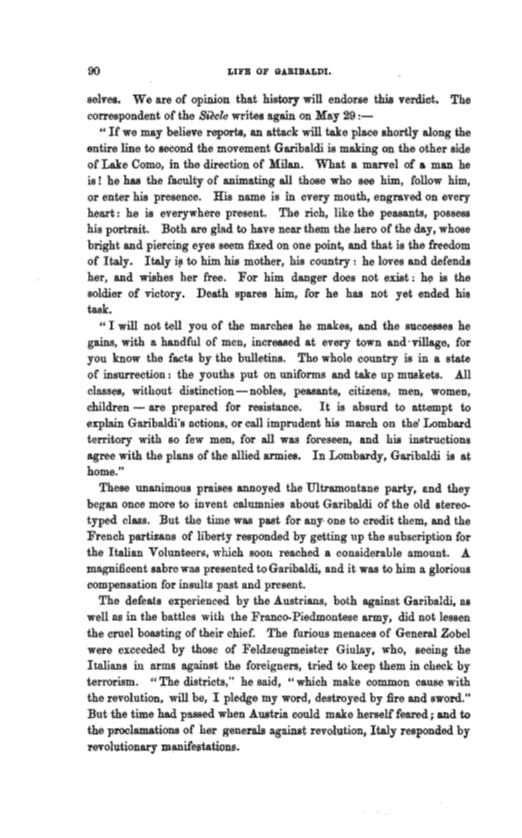 selves. We are of opinion that history will endorse this verdict. The correspondent of the Siecle writes again on May 29 :­

"If we may believe reports, an attack will take place shortly along the entire line to second the movement Garibaldi is making on the other side of Lake Como, in the direction of Milan. What a marvel of a man he is ! he has the faculty of animating all those who see him, follow him, or enter his presence. His name is in every mouth, engraved on every heart: he is everywhere present. The rich, like the peasants, possess his portrait. Both are glad to have near them the hero of the day, whose bright s.nd piercing eyes seem fixed on one point, and that is the freedom of Italy. Italy to him his mother, his country: he loves and defends her, and wishes her free. For him danger does not exist: he is the soldier of victory. Death spares him, for he has not yet ended his task.

" I will not tell you of the marches he makes, and the successes he gains, with a handful of men, increased at every town and· village, for you know the facts by the bulletins. The whole country is in a state of inswTection : the youths put on uniforms and take up muskets. All c lass e s, without distinction-nobles, peasants, citizens, men, women, children -.are prepared for resistance. It is .absurd to attempt to explain Garibaldi's actions, or call imprudent his march on the' Lombud territory with so few men, for all was foreseen, and his instructions agree with the plans of the allied armies. In Lombardy, Garibaldi is at home . "

These1 unanimous praises annoyed the Ultramontane party, end they b egan once more to invent calumnies about Garibaldi of the old stereo­ typed class. But the time was past for any one to credit them, and the French partizans of liberty responded by getting up the subscription for the Italian Volunteers, which soon reached a considerable amount. A magnificent sabre was presented to Garibaldi, and it was to him a glorious compen : ;ation for insults past and present.

The defeats experienced by the Austrians, both against Garibaldi, ns well as iin the battles with the Franco-Piedmontese army, did not lessen the cruel boasting of their chief. The furious menaces of General Zobel were exceeded by those of Feldzeugmeister Giulay, who, seeing the Italians in arms against the foreigners, tried to keep them in check by terrorism. "The districts," he said, "which make common cause with the revolution, will be, I pledge my word, destroyed by fire a.nd sword." But the time had passed when Austria could make herself feared; a.nd to the proelamations of her generals against revolution, Italy responded by revolutionary manifestations. 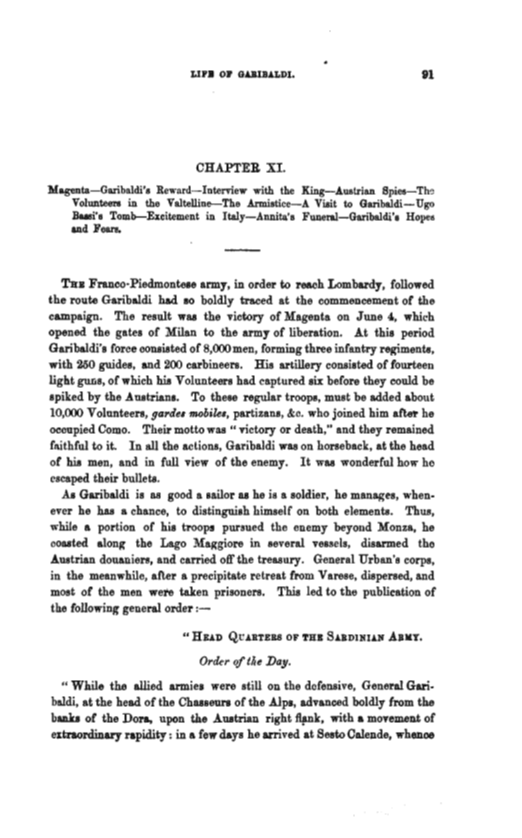 TRB Franco ..Piedmonteae army, in order to reach Lombardy, followed the route Gariba.ldi had so boldly traced at the commencement of the campaign. The result was the victory of Magenta on June 4, which opened the gates of Milan to the army of liberation. At this period Gariba.ldi's for(!e consisted of 8,000 men, forming three infantry regiments, with 200 guides, and 200 carbineers. His artillery consisted of fourteen light guns, of which his Volunteers had captured six before they could be spiked by the .Austrians. To these regular troops, must be added about 10,000 V olunte,ers, 9ardes mobiles, partizans, &c. who joined him after he occupied Como. Their motto was " victory or death," and they remained fnithful to it. In all the actions, Garibaldi was on horseback, at the head of his men, and in full view of the enemy. It was wonderful how he escaped their bullets.

AB Garibaldi is as good a sailor o.s he is a soldier, he manages, when­ ever he has a chance, to distinguish himself on both elements. Thus, while a portion of his troops pursued the enemy beyond Monza, he coiUited along the Lago Maggiore in several vessels, disarmed the Austrian douaniers, and carried off the treiUiury. General Urban's corps, in the meanwhile, after a precipitate retreat from Varese, dispersed, and most of the men were taken prisoners. This led to the publication of the following general order :­

" While the allied armies were still on the defensive, General Gari­ baldi, at the head of the Cho.sseurs of the Alps, advanced boldly from the banks of the I>ora, upon the Austrian right with a movement of extraordinary rapidity: in a few days he arrived at Sesto Calende, whence

u. cizedbyGoogle
Previous Page Next Page