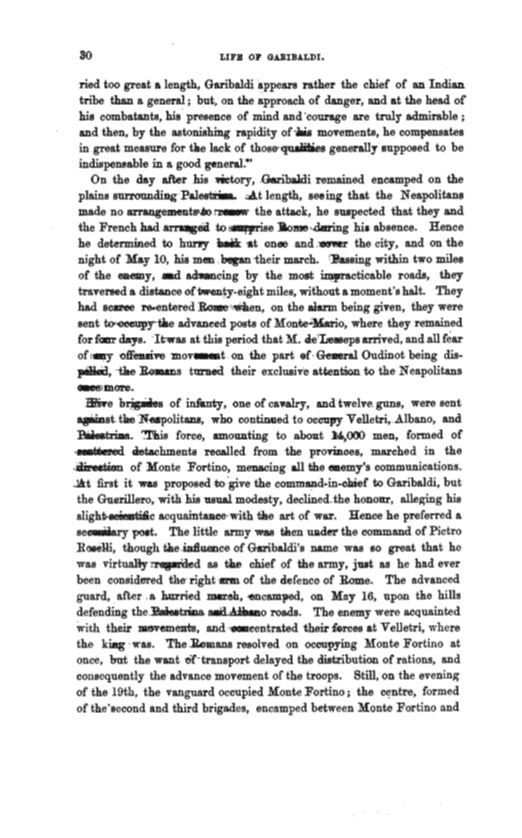 ried too a length, Garibaldi appears rather the chief of an Indian tribe tha:n a general; but, on the approach of danger, and at the head of his combatants, his presence of mind and·courage are truly admirable ; and then, by the astonishing rapidity of·;8is movements, he compensates in great measure for tb.e lack of those·qualmes generally supposed to be in a good general."

On thE' day after his cvictory, Garibaldi remained encamped on the plains surrounding Pa.lesm.a. .:At length, seeing that the Neapolitans made no .arrangementll'm the attack, he suspected that they and the had arrurged to Dome.Juring hia absence. Hence he determined to hurry liiMk ·at onee and .·mwr the city, and on the night of May 10, his men .began their march. :eassing within two miles of the Ellitemy, .d ad'1111ncing by the most impracticable roads, they traversed a distance oftwenty-eight miles, without a moment's halt. They had scame Rome-\'\f:hen, on the alarm being given, they were sent advanced posts of Monte.:.Mario, where they remained for fum-d1tys. I twas at this period that M. de'Le811eps arrived, andallfear

> lltllilile!!ed detachments recalled from the provinces, marched in the ..

of Monte Fortino, menacing a.ll the tlllemy's communications. JAt first it was proposed to ·give the command•in-chief to Garibaldi, but the Guerillero, with his usual modesty, declined. the honour, alleging his slight-seielllti.fie acquaintance· with the art of war. Hence he preferred a setlllllliiary poat. The little army was then wtder the command of Pietro Reselli, though the influence of Garibaldi's name was so great that he was as the chief of the army, just as he had ever been comlidered the right a:rm of the defence of Rome. The advanced guard, after . a .lmrried InftCh, -encamped, on May 16, upon the hills defending the.lWeatrilla. llllii.Alemo roads. The enemy were acquainted with Dl'()Vements, and •CJCIIIeentrated their fGrces at Velletri, where the kiag ·was. 'The.:&omans resolved on occupying Monte Fortino at once, but the want of·transport delayed the distribution of rations, and consequeiJttly the advance movement of the troops. Still, on the evening of the 19th, the vanguard occupied Monte Fortino; the centre, formed ofthe'second and third brigades, encamped between Monte Fortino and 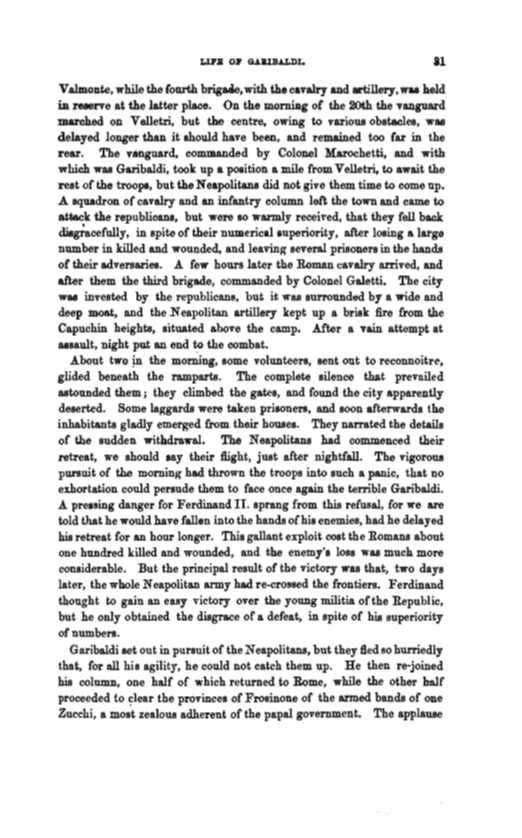 V almonte, wlwe the fourth brigacie, with the cavalry and artillery, was held in reserve at the latter place. On the morning of the 20th the vanguard marched on V elletri, but the centre, owing to various obstacles, was delayed longer than it should have been, and remained too far in the rear. The ·va-nguard, commanded by Colonel Marochetti, and with which was G1u-ibaldi, took up a position a mile from V elletri, to await the rest of the troops, but theNeapolitans did not give them time to come up. A squadron of cavalry and an infantry column left the town and came to attack the republicans, but were so warmly received, that they fell back in spite of their numerical superiority, after losing a large number in killed and wounded, and leaving several prisoners in the hands of their advex"Saries. A few hours later the Roman cavalry arrived, and after them tlh.e third brigade, commanded by Colonel Galetti. The city waa invested by the republicans, but it was surrounded by a wide and deep moat, the Neapolitan artillery kept up a brisk fire from the Capuchin heights, situated above the camp. After a vain attempt at assault, night put an end the combat.

About two the morning, some volunteers, sent out to reconnoitre, glided beneath the ramparts. The complete silence that prevailed astounded them; they climbed the gates, and found the city apparently deserted. Some laggards were taken prisoners, and soon afterwards the inhabitants gladly emerged from their houses. They narrated the details of the sudde'n withdrawal. The Neapolitans had commenced their retreat, we 11hould say their flight, just after nightfall. The vigorous pursuit of th.e morning had thrown the troops into such a panic, that no exhortation could persude them to face once again the terrible Garibaldi. A pressing dnnger for Ferdinand II. sprang from this refusal, for we are told that he would have fellen into the hands of his enemies, had he delayed his retreat for an hour longer. This gallant exploit cost the Romans about one hundred killed and wounded, and the enemy's loss was much more considerable. But the principal result of the victory was that, two days later, the whole N capolitan army had re-crossed the frontiers. Ferdinand thought to gain an easy victory over the young militia ofthe Republic, but he only obtained the disgrace of a defeat, in spite of his superiority of numbers.

Garibaldi set out in pursuit of theNeapolitans, but they fled so hurriedly that, for all his agility, he could not catch them up. He then re·joined his column, one half of which returned to Rome, while the other half proceeded to the provinces of Frosinone of the armed bands of one Zucchi, a mont zealous adherent of the papal government. The applause