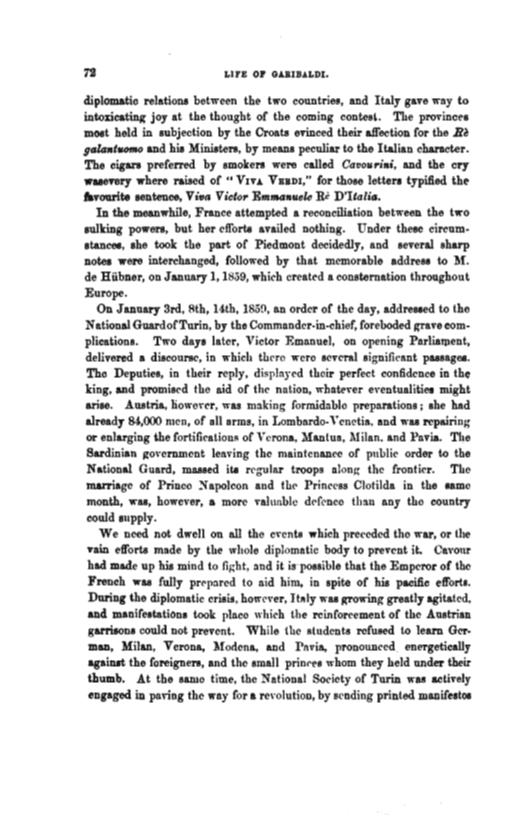 diplomatic relations between the two countries, and Italy gave way to intoxicating joy at the thought of the coming contesl. The provinces most held in subjection by the Croats evinced their affection for the Re galantwmto and his Ministers, by means peculiar to the I talian character. The cign.rs preferred by smokers were called Ca11ourini, and the cry wasevery where raised of "Vxv.A. VBBDI," for those letters typified the lavouritAit sentence, V itta Victo,. Emmanuele Re D'ltalia.

In the> meanwhile, France attempted a reconciliation between the hro sulking powers, but her efforts availed nothing. Under these circum­ stances, she took the part of Piedmont decidedly, and several sharp notes w1ere interchanged, followed by that memorable address to lf. de Hubner, on January 1,1859, which created a consternation throughout Europe.

On JB,nuary 3rd, 8th, 14th, 185!l, an order of tho day, addressed to tho National GuardofTurin, by the Commander·in·ehief, foreboded grave eom­ plicatioills. Two days later, Victor Emanuel, on opening Porlia!llent, delivered a discourse, in which there were several signifil'ant passageJJ. Tho DE,puties, in their reply, displayed their perfect confidence in the king, and promised tho aid of the nation, whate¥cr C\'entualities might arise. Austria, howe,·er, was making formidable preparations; abe had already 84,000 men, of all arms, in Lombardo. Venetia, and \\'as or enlarging t.he fortificationR of V crona, Man tun, Milan. and Pavia. The Sardinizm lea¥ing the maintenance of publir order to the National Guard, massed ita regular troops along the frontier. The marriage of Prince nod the PrinN·ss Clotilda in the same month, was, however, a more valuable defence than any tho country could supply.

We need not dwell on nil the c\·cnts which preeeded tho war, or the

vain efforts made by the whole diplomatic body to prevent it. Cavour

had m&Ale up his mind to fight, nnd it is possible that the Emperor of the

French was fully prepared to aid him, in spite of his pacific efforts.

Dnring the diplomatic crisis, however, It11ly was growing greatly agitated,

and manifestations took place which the reinforcement of tho Austrian

garrisons could not prevent. While the students refused to learn Ger.

against tho foreigners, and the small prinl'es whom they held under their

thumb. At the same time, the National Society of Turin '\\·as actively

engage(l in paving the way for a revolution, by Sl'nding printed manifestos 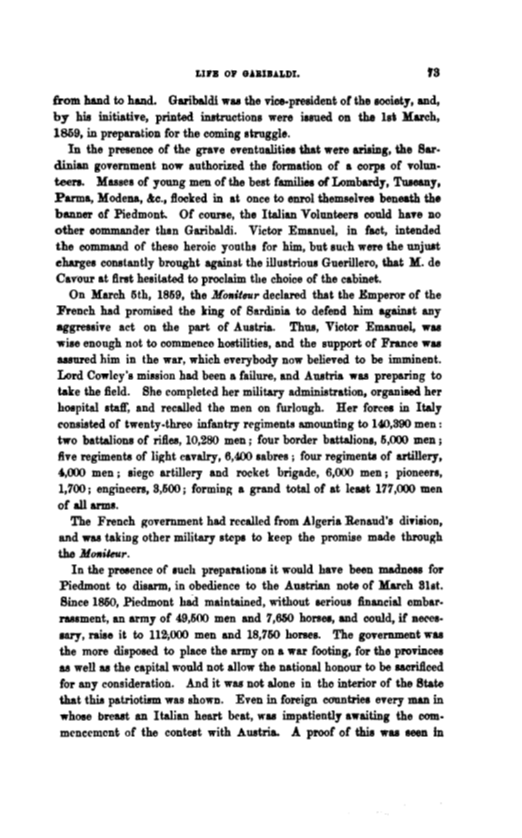 from band to hand. Garibaldi was the vice-president of the society, and, by his initialdve, printed instructions were issued on the 1st March, 1859, in preplll'ation for the coming druggle.

In the pre11ence of the grave eventualities that were ariaing, the Sar­ dinian government now authorized the formation of a corps of volun­ teers. Massea of young men of the beat familiea of Lombardy, Tuaoany, Parma, Mode:na, &c., flocked in at once to enrol themselves beneath the banner of Piedmont. Of course, the Italian Volunteers could have no other commander than Garibaldi. Victor Emanuel, in faot, intended the command of these heroic yonthe for him, but suth were the unjuat charges constantly brought against the illustrious Guerillero, that M. de Cavour at first hesitated to proclaim the choice of the cabinet.

aggressive aet on the part of Austria. Thus, Victor Emanuel, was

wise enough not to commence hostilities, and the support of France was

aasured him in the war, which everybody now believed to be imminent.

Lord Cowley's mi11sion had been a failure, and Austria was preparing to

take the field. She completed her military administration, organised her

hospital staff, and recalled the men on furlough. Her forces in Italy

The French government had recalled from Algeria Renaud's division,

In the pl'tlf•ence of auch preparations it would have been madnees for Piedmont to disarm, in obedience to the Austrian note of March Slat. Since 1850, J>iedmont had maintained, without serious financial embar­ rassment, an army of 49,500 men and 7,650 honea, and could, if neces­ sary, raise it to 112;000 men and 18,750 horses. The government was the more disposed to place the army on a war footing, for the provinces as well as thn capital would not allow the national honour to be B&Criflced for any consideration. And it was not alone in the interior of the State that this patriotism was shown. Even in foreign countries every man in whose breast; an Italian heart beat, was impatiently awaiting the com­ mencement of the contest with Austria. A proof of this was seen in