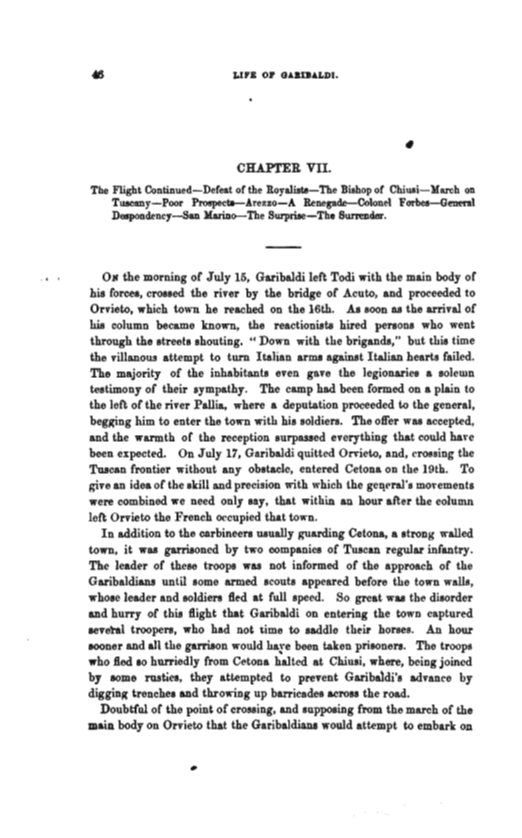 ON the morning of July 15, Garibaldi left Todi with the main body of his forces, crossed the river by the bridge of Acuto, and proceeded to Orvietc1, which town he reached on the 16th. As soon as the arrival of his column became known, the reactionists hired persons who went through the streets shouting, "Down with the brigands," but this time the villanous attempt to turn Italian arms against Italian hearts failed. The m1!jority of the inhabitants even gave the legionaries a solewn testimony of their sympathy. The camp had been formed on a plain to the left of the river Pallia, where a deputation proceeded to the general, him to enter the town with his soldiers. The offer was accepted, and the warmth of the reception surpassed everything that could ha¥c been ell:pected. On July 17, Garibaldi quitted Orvieto, and, crossing the Tuscan frontier without any obstacle, entered Cetona on the 19th. To give an idea of the skill and precision with which the geql'ral's mo¥ements were combined we need only say, that within an hour after the column left Or1rieto the French occupied that town.

In addition to the carbineers usually guarding Cetona, a strong walled town, it was garrisoned by two companies of Tuscan regular infantry. The letLder of these troops was not informed of the approach of the Garibaldians unlil some armed scouts appeared before the town walls, whose leader and soldiers fled at full speed. So great was the disorder and hu1Ty of this flight that Garibaldi on entering the town captured seven! troopers, who had not time to saddle their horses. An hour sooner 1md all the garrison would been taken prisoners. The troops who flecl eo hurriedly from Cetona halted at Chiuai, where, being joined by BOIIIe rustics, they attempted to prevent Garibaldi's advance by digging trenches and throwing up barricades across the road.

Doub tful of the point of crossing, and supposing from the march of the main body on Orvieto that the Garibaldians would attempt to embark on 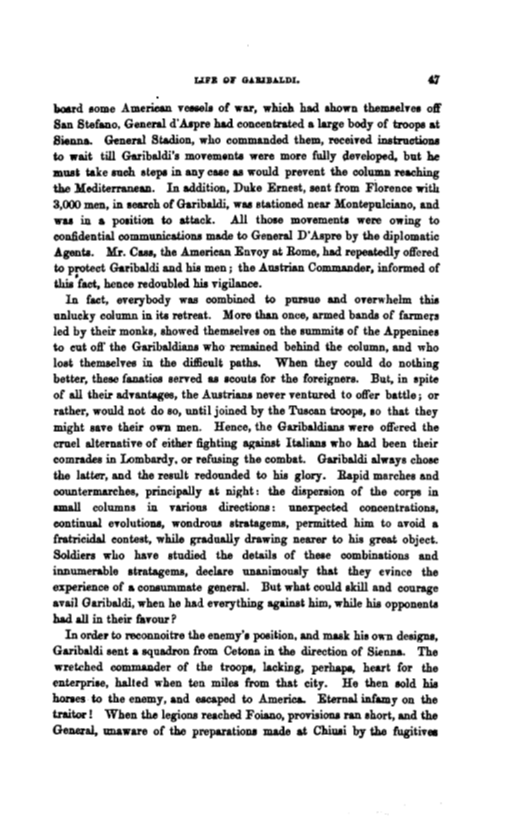 board some .A,meriean vessels of war, whicll had shown themselves off San Stefano, General d 'Aapre had concentrated a large body of troops at Sienna. Gent!ral Stadion, who commanded them, received instructions to wait till Garibaldi's movements were more fully developed, but he must take such a tepa in any ca.ae as would prevent the colWIUl reaching the Mediterranean. In addition, Duke Ernest, sent from Florence with 3,000 men, in 1search of Garibaldi, wa.a stationed near Montepulciano, and wu in a po11ition to attack. All those movements were owing to confidential CCJ>mmunica.tions made to General D'Aapre by the diplomatic Agents. Mr. Cass, the .American Envoy at Rome, had repeatedly offered to protect Garibaldi and his men; the AustriAn Commander, informed of

this fact, hence redoubled his vigilance.

In fact, everybody was combined to pursue and overwhelm this unlucky column in its retreat. More than once, armed bands of farmers led by their monks, showed themselves on the summits of the .Appeninea to cut o.fl' the Garibaldiana who· remained behind the column, and who lost in the diffieult paths. When they could do nothing better, these tiwatica served as acouts for the foreigners. But, in spite of all their adnntages, the Austrians never ventured to offer battle; or rather, would not do so, until joined by the Tuscan troops, so that they might save th.eir own men. Hence, the Garibaldians were offered the cruel alternative of either fighting against Italians who had been their comrades in Lombardy, or refusing the combat. Garibaldi always chose the latter, an<l the result redounded to his glory. Rapid marches and principally at night: the dispersion of the corps in small columns in various directions : unexpected concentrations, continual eToRutions, wondrous stratagems, permitted him to avoid a fratricidal contest, while gradually drawing nearer to his great object. Soldiers who have studied the details of these combinations and innumerable stratagems, declare unanimously that they evince the experience of a consummate general. But what could skill and courage avail Garibaldi, when he had everything against him, while his opponents had all in thei:r favour P

In ordel' to reconnoitre the enemy's position, and mask his own designs, Garibaldi sent a squadron from Cetona in the direction of Sienna. The wretched con1mander of the troops, lacking, perhaps, heart for the enterpriae, halted when ten miles from that city. He then sold his horaes to the enemy, and escaped to .America. Eternal infamy on the traitor! WhEm the legions reached Foiano, provisions ran short, and the General, unaware of the made at Chiuai by the fugitivee