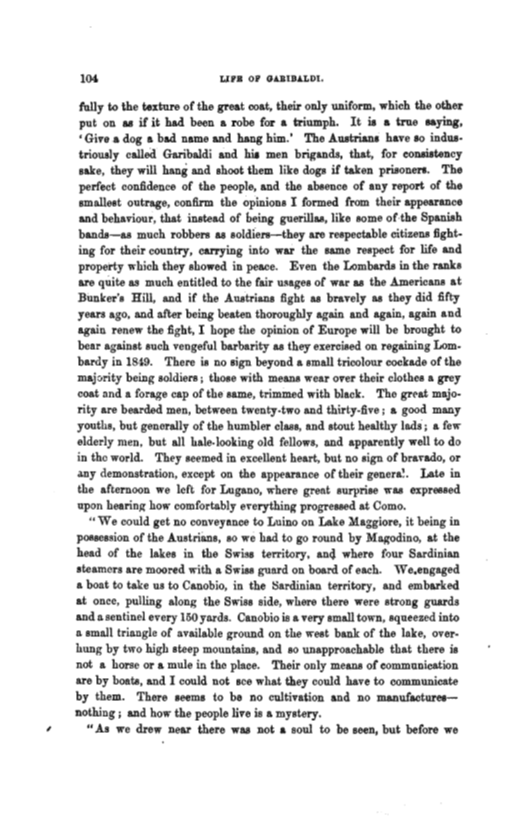 fully to the texture of the great coat, their only uniform, which the other put on as ifit had been a robe for a triumph. It is a true saying, ' Give a dog a bad name and hang him.' The Austrians have so indus­ triously called Garibaldi and his men brigands, that, for consistency sake, they will hang and shoot them like dogs iftaken prisoners. The perfect confidence of the people, and the absence of any report of the smallest outrage, confirm the opinions I formed from their appearance and behaYiour, that instead of being guerillas, like some of-the Spanish much robbers as soldiers-they are respectable citizens fight­ ing for their country, carrying into war the same respect for life and property which they showed in peace. Even the Lombards in the ranks are quite as much entitled to the fair u8ages of war as the Americans at Bunker's Hill, and if the Austrians fight as bravely as they did fifty years ago, and after being beaten thoroughly again and again, again and again renew the fight, I hope the opinion of Europe will be brought to bear against such vengeful barbarity as they exercised on regaining Lom. hardy in 1849. There is no sign beyond a small tricolour cockade of the majority being soldiers ; those with means wear over their clothes a grey coat and a forage cap of the same, trimmed with black. The great majo­ rity are bearded men, between twenty-two and thirty-five; a good many youths, but generally of the humbler class, and stout healthy lads; a few elderly men, but all hale-looking old fellows, and apparently well to do in the world. They seemed in excellent heart, but no sign of bra'l"ado, or any demonstration, except on the appearance of their Late in the afternoon we left for Lugano, where great surprise was expressed upon hearing how comfortably e'l"erything progressed at Como.

"We could get no conveyance to Luino on Lake Maggiore, it being in possession of the Austriims, so we had to go round by Magodino, at the head of the lakes in the Swiss territory, anc} where four Sardinian steamers are moored with a Swiss guard on board of each. W e,engaged a boat to take us to Canobio, in the Sardinian territory, and embarked at once, pulling along the Swiss side, where there were strong guards and a sentinel every 150yards. Canobio is a very small town, squeezed into a small triangle of available ground on the west bank of the lake, over­ hung by two high steep mountains, and so unapproachable that there is not a horse or a mule in the place. Their only means of communication are by and I could not see what they could have to communicate by them. There seems to be no cultivation and no manufactures­ nothing; and how the people live is a mystery.

; " As Wtt drew near there was not a soul to be seen, but before we 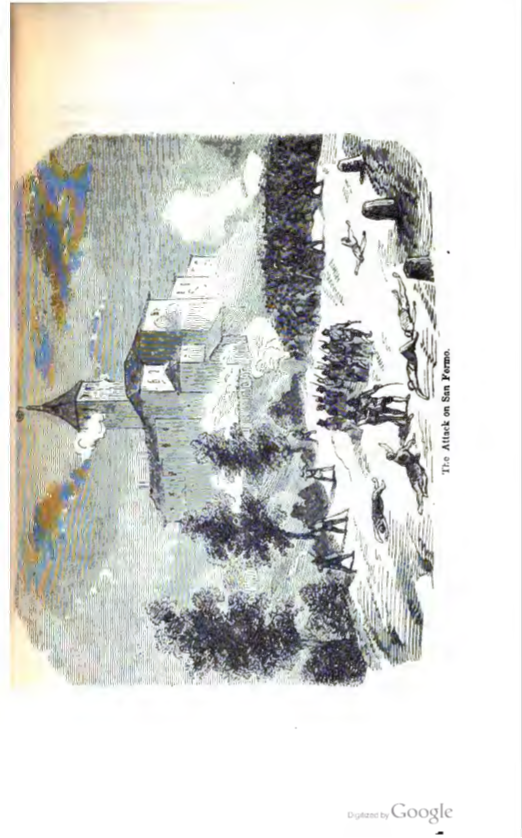