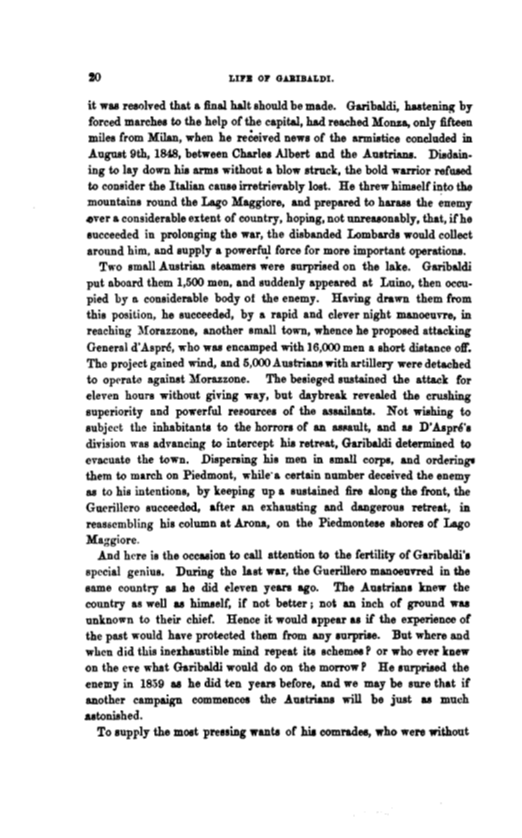 it was resolved that a final halt should be made. Garibaldi, hastening by forced marches to the help ofthe capital, had reached Monza, only fifteen miles from Milan, when he received news of the armistice concluded in August 9th, 184.8, between Charles Albert and the Austrians. Disdain­ ing to l:1y down his arms without a blow struck, the bold warrior refused to consider the Italian cause irretrievably lost. He threw himself into the mountains round the Lago Maggiore, and prepared to harass the enemy .ever a considerable extent of country, hoping, not unreaaonably, that, ifhe succeeded in prolonging the war, the disbanded Lombard& would collect around him, and supply a powerfuJ force for more important operations.

Two small Austrian steamers were surprised on the lake. Garibaldi put aboard them 1,500 men, and suddenly appeared at Luino, then occu­ pied by a considerable body of the enemy. Having drawn them from this position, he succeeded, by a rapid and clever night manoeuvre, in reaching l\Iorazzone, another small town, whence he proposed attacking General d"Aspr.S, who waa encamped with 16,000 men a short distance off. The gained wind, and 5,000 Austrians with artillery were detached to oper11te against Morazzone. The besieged sustained the attack for eleven hours without giving way, but daybreak revealed the crushing superiority and powerful resources of the assailants. Not wishing to subject the inhabitants to the horrors of an as11ault, and aa division was advancing to intercept his retrt1at, Garibaldi determined to evacuate the town. Dispersing his men in small corps, and orderingw them to march on Piedmont, while· a certain number deceived the enemy aa to hi11 intentions, by keeping up a sustained fire along the front, the Guerillero succeeded, an exhausting and dangerous retreat, in reassembling his eolunm at Arona, on the Piedmonteae shores of Lago Maggiore.

And here is the occasion to call attention to the fertility of Garibaldi's special genius. During the last war, the Guerillero manoeuvred in the same country as he did eleven years ago. The Austrians knew the country as well aa himself, if not better ; not an inch of ground was unknown to their chief. Hence it would appear as if the experience of the past would have protected them from any surprise. But where and when did this inexhaustible mind repeat ita schemes P or who ever knew on the eve what Garibaldi would do on the morrow P He surprised the enemy i:n 18:>9 aa he did ten years before, and we may be sure that if another campaign commences the Austrians will be just aa much astonished.

To supply the most pressing wants of his comrades, who were without 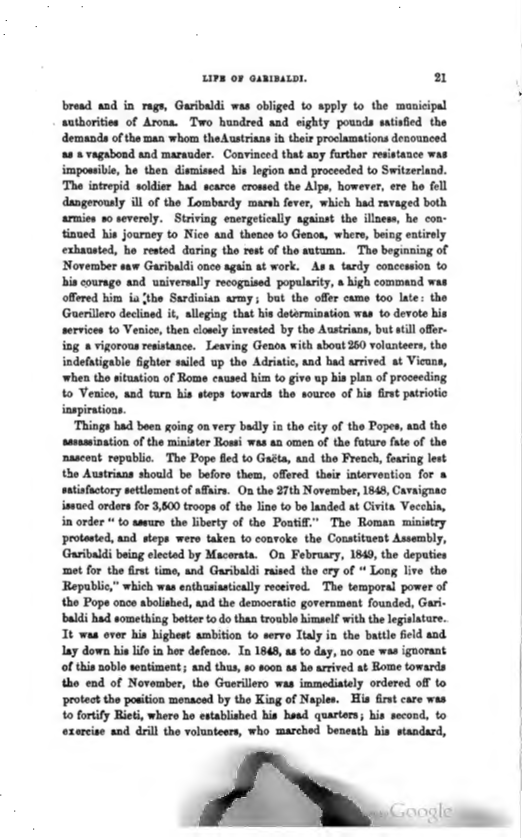 bread and in rags, Garibaldi was obliged to apply to the municipal authorities of Arona. Two hundred and eighty pounds satisfied the demands ofthe man whom theAustrians ih their proclamations denounced as a vagabond and marauder. Convinced that any further resistance was impossible, he then dismissed his legion and proceeded to Switzerland. The intrepid soldier had scarce crossed the Alps, however, ere he fell dangerously ill of the Lombardy manh fever, which had ravaged both armies 110 severely. Striving energetically against the illness, he con­ tinued his journey to Nice and thence to Genoa, where, being entirely exhausted, he rested during the rest of the autumn. The beginning of November saw Garibaldi once again at work. Aa a tardy concession to his c_ourage and univeraally recogniaed popularity, a high command was offered him iu. :the Sardinillll army; but the offer came too late : the Guerillero declined it, alleging that his determination was to devote his aervices to Venice, then closely invested by the Austrians, but still offer­ ing a vigorous resistance. Leaving Genoa with about 250 volunteers, the indefatigable fighter sailed up the Adriatic, and had arrived at Vicuna, when the aituation of Rome caused him to give up his plan of proceeding to Venice, and turn his steps towards the source of hia first patriotic inapirationa.

Thinga had been going on very badly in the city of the Popes, and the assasaination of the minister Rossi was an omen of the future fate of the nascent republic. The Pope fled to Gaeta, and the French, fearing lest t!J.e Austrians should be before them, offered their intervention for a aatisfaotory settlement of affaire. On the 27th November, 1848, Cavaignac iasued order11 for 3,600 troops of the line to be landed at Givita. V ecchia, in order " to assure the liberty of the Pontiff." The Roman ministry proteated, and atepa were taken to convoke the Constituent Assembly, Garibaldi being elected by Macerata. On February, 1849, the deputies met for the first time, and Garibaldi raised the cry of " Long live the Republic," which was enthusiastically received. The temporal power of the Pope once abolished, and the democratic government founded, Gari­ baldi had something better to do than trouble himself with the legislature .. It was ever his highest ambition to serve Italy in the battle field and lay down his life in her defence. In 184.8, as to day, no one was ignorant of this noble eentiment ; and thus, so aoon aa he arrived at Rome towards the end of November, the Guerillero waa immediately ordered off to protect the poaition menaced by the King of Naples. Hia first care waa to fortify Rieti, where he eatablished his head quarter& ; hia aecond, to exerciae and drill the volunteen, who marched beneath his atandard,