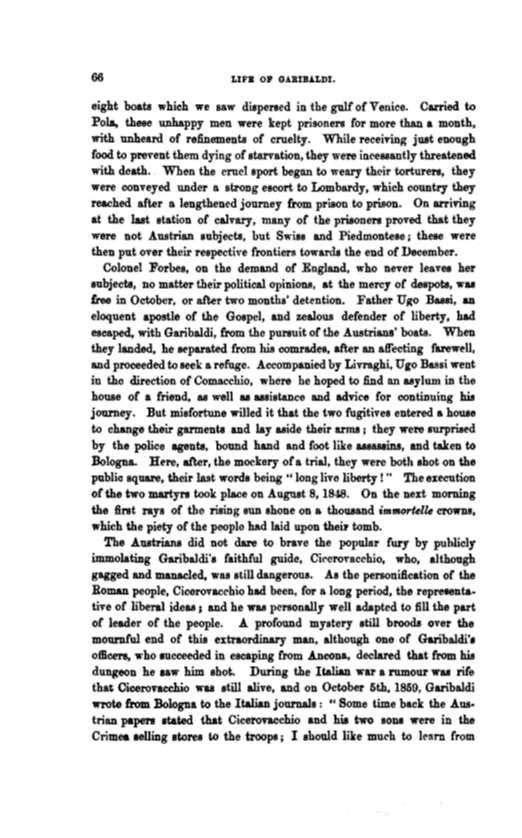 eight l1oats which we saw dispersed in the gulf of Venice. Carried to Pola, l;hese unhappy men were kept prisoners for more than a month, with unheard of refinements of cruelty. Wb.ile receiving just enough food to prevent them dying of starvation, they were inceuantly threatened with dllath. . When the cruel sport began to weary their torturers, they were conveyed under a strong escort to Lombardy, which country they reache(l after a lengthened journey from prison to prison. On arriving at the last station of calvary, many of the prisoners proved that they were not Austrian subjects, but Swiss and Piedmontese; these were then put over their respective frontiers towards the end of December.

Colonel Forbes, on the demand of England, who never leaves her subjects, no matter their politica.l opinions, at the mercy of despots, Willi free in October, or after two months' detention. Father Ugo Bllllsi, an eloquent apostle of the Gospel, and zealous defender of liberty, had escaped, with Garibaldi, from the pursuit of the Austrians' boats. When they landed, he separated from his comrades, after an affecting farewell, and pr<1ceeded to seek a refuge. Accompanied by Livraghi, Ugo Bassi went in tho direction of Comacchio, where he hoped to find an asylum in the house of a friend, llll well as assistance and advice for continuing his journey. But misfortune willed it that the two fugitives entered a house to change their garments and lay aside their arms ; they were surprised by thE' police agents, bound hand and foot like assassins, and taken to Bologna. Ht>re, after, the mockery of a trial, they were both shot on the public their last words being "long live liberty! " The execution of the I:Wo martyrs took place on August 8, 18·J.8. On the next morning the fil'11t rays of the rising sun shone on a thousand immortelle crowns, which 1llie piety of the people had laid upon tomb.

The Austrians did not dare to brave the popular fury by puhlicly immolll>ting Garibaldi's faithful guide, CiccroTacchio, who, although gagged and manacled, was still dangerous. As the personification of the Roman people, Cicerovacchio had been, for a long period, the repretenta­ tive of liberal ideas ; and he Willi persona.lly well adapted to fill the part of leader of the people. A profound mystery still broods over the mourntul end of this extraordinary man, although one of Garibaldi's officers, who succeeded in escaping from Ancona, declared that from his dungeon he saw him shot. During the Italian war a rumour was rife that Ciicerovacchio was still alive, and on October 5th, 1859, Garibaldi wrote l%om Bologna to the Italian journals : " Some time back the Aus­ trian papers stated that Cicerovacchio and his two sons were in the Crimea, selling stores to the troops; I should like much to lt>arn from 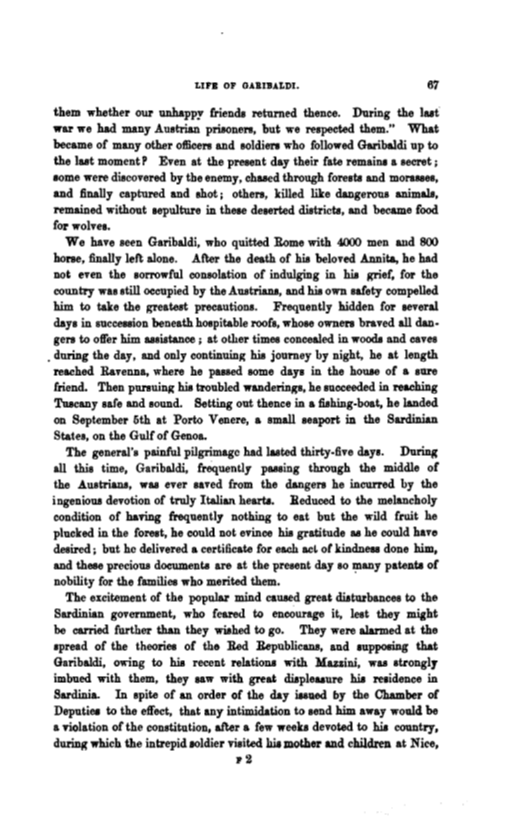 them whether our unhappy friends returned thence. During the last

war we had ntany Austrian prisoners, but we respected them." What

the last moment P Even at the present day their fate remains a secret ;

some were diseovered by the enemy, chased through forests and morasses,

and finally nptured and shot ; others, killed like dangerous animals,

remained without sepulture in these deserted districts, and became food

horse, finally left alone. After the death of his beloved A.nnita, he had not even the sorrowful consolation of indulging in his grief, for the country was st;ill occupied by the Austrians, and his own safety compelled him to take the greatest precautions. Frequently hidden for several days in succession beneath hospitable roofs, whose owners braved all dan­ gers to offer him assistance ; at other times concealed in woods and caves . during the day, and only continuing his journey by night, he at length reached Ravenna, where he passed some days in the house of a sure friend. Then pursuing his troubled wanderings, he succeeded in reaching Tuscany safe 1md sound. Setting out thence in a fishing-boat, he landed on September 5th at Porto Venere, a small seaport in the Sardinian

States, on the Gulf of Genoa.

The general's painful pilgrimage had lasted thirty-five days. During

all this time, Garibaldi, frequently passing through the middle of

the Austrians, was ever saved from the dangers he incurred by the

ingenious devotion of truly Italian hearts. :Reduced to the melancholy

plucked in the forest, he could not evince his gratitude as he could have

desired ; but he delivered a certificate for each acL of kindneu done him,

nobility for the families who merited them.

The excitement of the popular mind caused great disturbances to the

Sardinian government, who feared to encourage it, lest they might

be carried fw·ther than they wished to go. They were alarmed at the

spread of the theories of the Red Republicans, aud supposing that

Garibaldi, owing to his recent relations with Mazzini, was strongly

imbued with them, they saw with great displeaaure his reaidence in

Sardin i a . In spite of an order of the day issued by the Chamber of

Deputies to the effect, that any intimidation to send him away would be

a violation of the constitution, after a few weeks devoted to his country,

during which t;he intrepid soldier visited his mother and children at Nice,