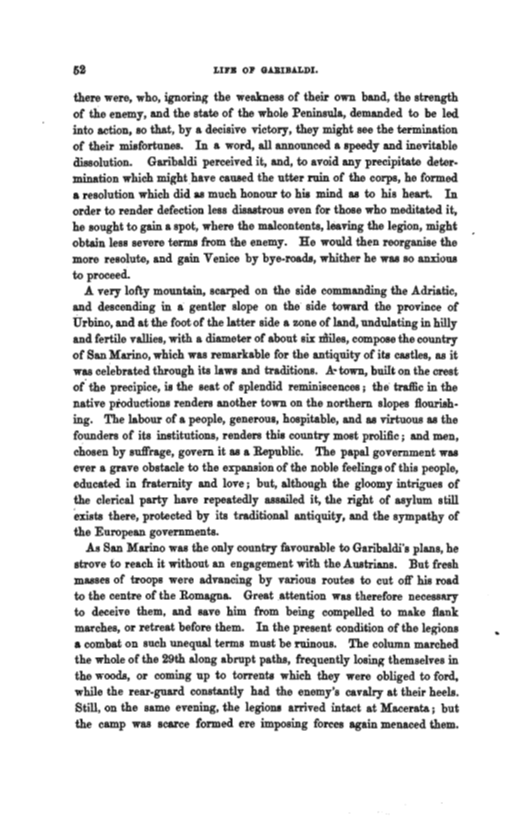 there were, who, ignoring the weakness of their own band, the strength of the enemy, and the state of the whole Peninsula, demanded to be led into action, so that, by a decisive victory, they might see the termination of their misfortunes. In a word, all announced a speedy and inevitable dissolution . Garibaldi perceived it, and, to avoid any precipitate deter­ mination which might have caused the utter ruin of the corps, he formed a resolution which did as much honour to his mind as to his heart. In order to render defection less disastrous even for those who meditated it, he sought to gain a spot, where the malcontents, leaving the legion, might obtain less severe terms from the enemy. He would then reorganise the more resolute, and gain Venice by bye-roads, whither he was so anxious to proceed.

A very lofty mountain, scarped on the side commanding the Adriatic, and descending in a gentler slope on the side toward the province of U rbino, and at the foot of the latter side a zone of land, undulating in hilly and fertile vallies, with a diameter of about six miles, compose the country of San Marino, which was remarkable for the antiquity of its castles, as it was celebrated through its laws and traditions. A· town, built on the crest or' the precipice, is the seat of splendid reminiscences ; the traffic in the native productions renders another town on the northern slopes flourish­ ing . The labour of a people, generous, hospitable, and as virtuous as the founders of its institutions, renders this country most prolific; and men, chosen by suffrage, govern it as a Republic. The papal government was ever a grave obstacle to the expansion of the noble feelings of this people, educated in fraternity and love; but, although the gloomy intri,"'Ues of the clerical party have repeatedly assailed it, the right of asylum still exists there, protected by its traditional antiquity, and the sympathy of the European governments.

As San Marino was the only country favourable to Garibaldi•s plans, he strove to reach it without an engagement with the Austrians. But fresh masses of troops were advancing by various routes to cut off his road to the cent re of the Romagna. Great .attention was therefore necessary to deceive them, and save him from being compelled to make flank marches, or retreat before them. In the present condition of the legions a combat on such unequal terms must be ruinous. The column marched the whole of the 29th along abrupt paths, frequently losing themselves in the woods, or coming up to torrents which they were obliged to ford, while the rear-guard constantly had the enemy's cavalry at their heels. Still, on the same evening, the legions arrived intact at Macerata; but the camp was scarce formed ere imposing forces again menaced them. 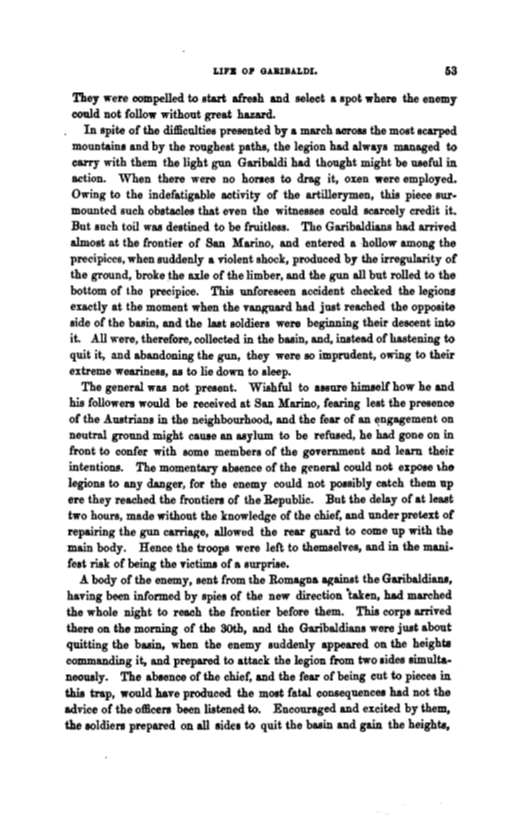 They were compelled to start afresh and select a spot where the enemy could not follow without great hazard.

In spite of the difficulties presented by a march across the most scarped mountains and by the roughest paths, the legion had always managed to carry with them the light gun Garibaldi had thought might be useful in action. "\Vhen there were no hones to drag it, oxen were employed. Owing to t he indefatigable activity of the artillerymen, this piece sur­ mounted such obstacles that even the witnesses could scarcely credit it. But such toil was destined to be fruitless. The Garibaldians had arrived almost at the frontier of San Marino, and entered a hollow among the precipices, when suddenly a violent shock, produced by the irregularity of the ground, broke .the axle of the limber, and the gun all but rolled to the bottom of the precipice. This unforeseen accident checked the legions exactly at the moment when the vanguard had just reached the opposite side of the basin, and the last soldiers were beginning their descent into it. All were, therefore, collected in the basin, and, instead of hastening to quit it, and abandoning the gun, they were so imprudent, owing to their extreme we,ariness, as to lie down to sleep.

The general was not present. Wishful to assnre himself how he and his followers would be received at San Marino, fearing lest the presence of the Austrians in the neighbourhood, and the fear of an 'lngagement on neutral ground might cause an asylum to be refused, he had gone on in front to COJ[lfer with some members of the government and learn their intentions. The momentary absence of the general could not expose t.he legions to mwy danger, for the enemy could not possibly catch them up ere they rellched the frontiers of the Republic. But the delay of at least two hours, made without the knowledge of the chief, and under pretext of repairing the gun carriage, allowed the rear guard to come up with the main body. Hence the troops were left to themselves, and in the mani­ fest risk of being the victims of a surprise.

A body of the enemy, sent from the Romagna against the Garibaldians, having beeiJl informed by spies of the new direction 'taken, had marched the whole night to reach the frontier before them. This corps arrived there on th11 morning of the 30th, and the Garibaldians were just about quitting the basin, when the enemy suddenly appeared on the heighta it, and prepared to attack the legion from two sides simulta­ neously. The absence of the chief, and the fear of being cut to pieces in this trap, would have produced the most fatal consequences had not the advice of th<e officers been listened to. Enconraged and excited by them, the soldiers prepared on all aides to quit the basin and gain the heighta,