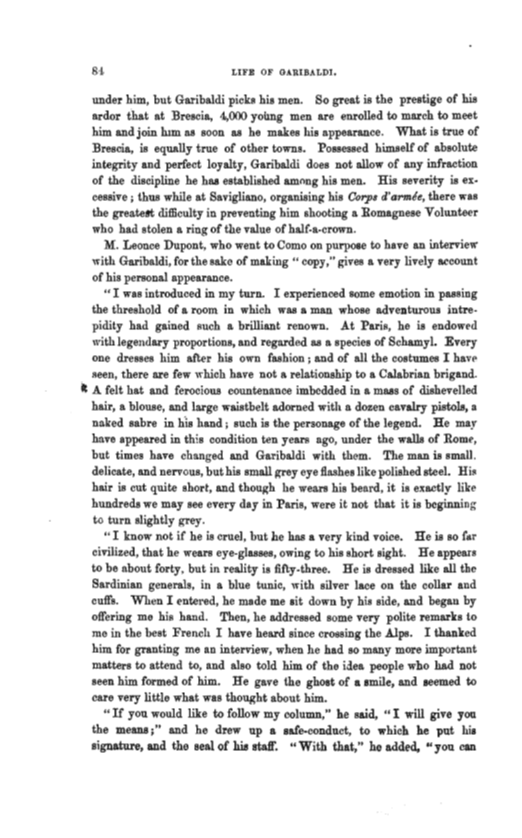 under him, but Garibaldi picks his men. So great is the prestige of his ardor that at Brescia, 4,000 young men are enrolled to march to meet him and join h1m as soon as he makes his appearance. What is true of Brescin, is equally true of other towns. Possessed himself of absolute integrity and perfect loyalty, Garibaldi does not allow of any infraction of the discipline he has established among his men. His severity is ex­ cessive ; thus while at Savigliano, organising his Corps d' armee, there was the greate!t difficulty in preventing him shooting a Romagnese Volunteer who had stolen a ring of the value of half-a-crown.

M. I.eonce Dupont, who went to Como on purpose to have an interview with Garibaldi, for the sake of making " copy," gives a very lively account of his Jlersonal appearance.

"I was introduced in my turn. I experienced some emotion in passing the threshold of a room in which was a man whose adventurous intre­ pidity had gained such a brilliant renown. At Paris, he is endowed with legendary proportions, and regarded as a species of Schamyl. Every one dresses him after his own fashion ; and of all the costumes I have seen, t here are few which have not a relationship to a Calabrian brigand.

A felt hat and ferocious countenance imbedded in a mass of dishevelled hair, a blouse, and large waistbelt adorned with a dozen cavalry pistols, a naked sabre in his hand; such is the personage of the legend. He may have appeared in this condition ten years ago, under t he walls of Rome, but times have changed and Garibaldi with them. The man is small. delicat e, and nervous, but his small grey eye flashes like polished steel. His hair is cut quite short, and though he wears his beard, it is exactly like hundreds we may see every day in Paris, were it not that it is beginninii to turn slightly grey. "I know not if he is cruel, but he has a very kind voice. He is so far civilized, that he wears eye-glasses, owing to his short sight. He appears to be about forty, but in reality is fifty-three. H e is dressed like all the Sardin ia n generals, in a blue tunic, with silver lace on the collar aud c uffs . When I entered, h e made me sit down by his side, and began by offe ring me his hand. Then, he addressed some very polite remarks to me in the best French I have heard since crossing the Alps. I thanked him for granting me an interview, when he had so many more important to attend to, and also told him of the idea people who had not seen him formed of him. He gave the ghost of a smile, and seemed to c are very little what was thought about him.

"If you would like to follow my column," he said, "I will give you the means;" o.nd he drew up a safe-conduct, to which he put his signature, and the seal of his staff. "With that," he added, "you can 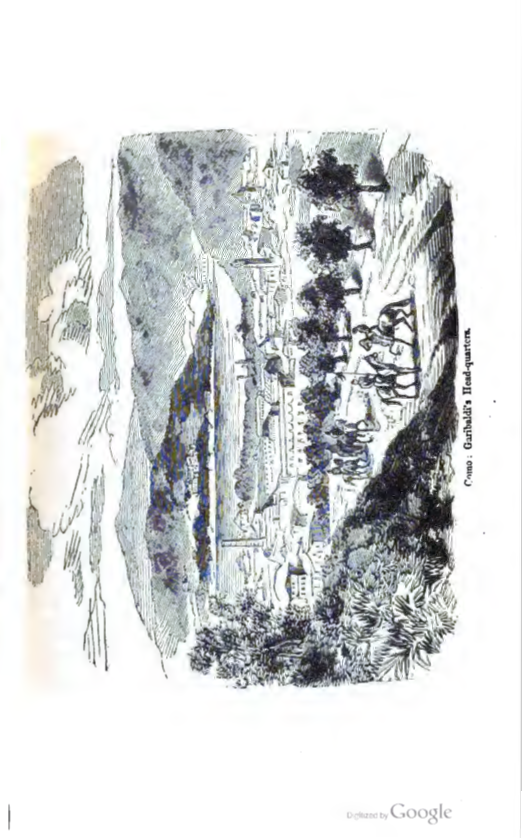