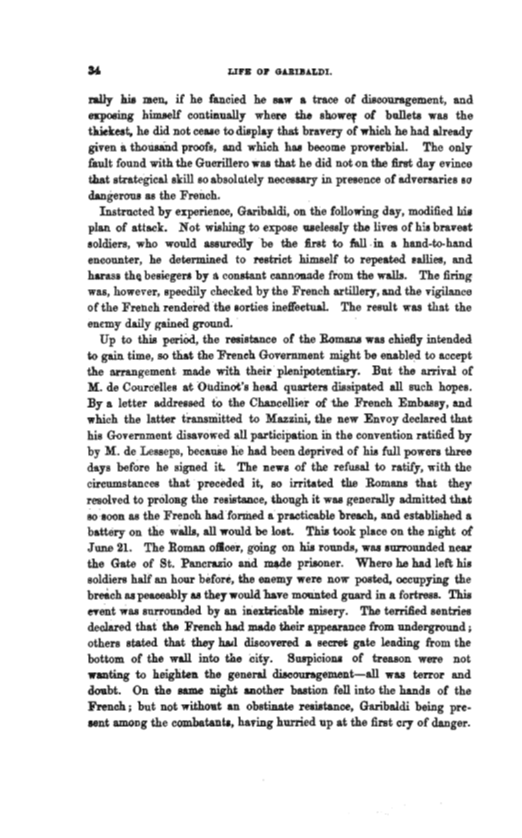 mlly his men. if he fancied he saw a trace of discouragement, and exposing himself continually where the showef of bullets was the tk1ek:esi;, he did not cease to display that bravery of which he had already given athousand proofs, and which has become proverbial. The only fault found with the Guerillero was that he did not on the first day evince that strategical skill so absoh1tely necessary in presence of adversaries sa dangerous as the French.

Instructed by experience, Garibaldi, on the following day, modified Iris plan of attack. Not wishing to expose uselessly the lives of his bravest soldiers, who would assuredly be the first to fall .in a hand-to.hand encounter, he determined to restrict himself to repeated sallies, and harass thQ besiegers by a constant canniJ!lade from the walls. 'l'he firing was, however, speedily checked by the French artillery, and the vigilance of the F'rench rendered the sorties ineffectual The result was that the en€my daily gained ground.

Up to this periOd, the resistance of the Romans was chiefly intended to gain time, so that the Freneh Government might be enabled to accept the arrn.ngement made with their plenipotentiary. But the arrival of

M . de Courc·eUes at Oudinot's head quarters dissipated all such hopes. By a letter addressed tO the Chancelliar of the French Embassy, and which the latter transmitted to Mazzini, the new Envoy declared that his Government disavowed all participation fu the convention ratified by by M. de Lesseps, because he had been deprived of his full powers three days before he signed it. The news of the refusal to ratify, with the circum s tances that preceded it, so irritated the Romans that they resolve d to prolong the resistance, though it was generally admitted th&t so soon as the French had formed a practicable breach, and established a battery on the wiills, all would he lost. This took place on the night of June 21. The Roman oflcer, going on his rounds, was surrounded near the Gat e of St. Pancrazio and made prisoner. Where he had left his soldiers half an hour before, the enemy were now posted, occupying the fLS peaceably as they would have mounted guard in a fortress. This ev e nt was surrounded by an inextricable misery. The t errified sentries declared that the French had made their appearance from underground ; others 11tated that they hall discovered a secret gate leading from the bottom of the wall into the City. Suspicions of treason were not wantin@ : to heighten the general discouragement-all w&s terror and doubt. On the same night another bastion fell into the hands of the French ; but not vritho11t an obstinate resistance, Garibaldi being pre­ sent among the combatant1, having hurried up at the first cry of danger. u. 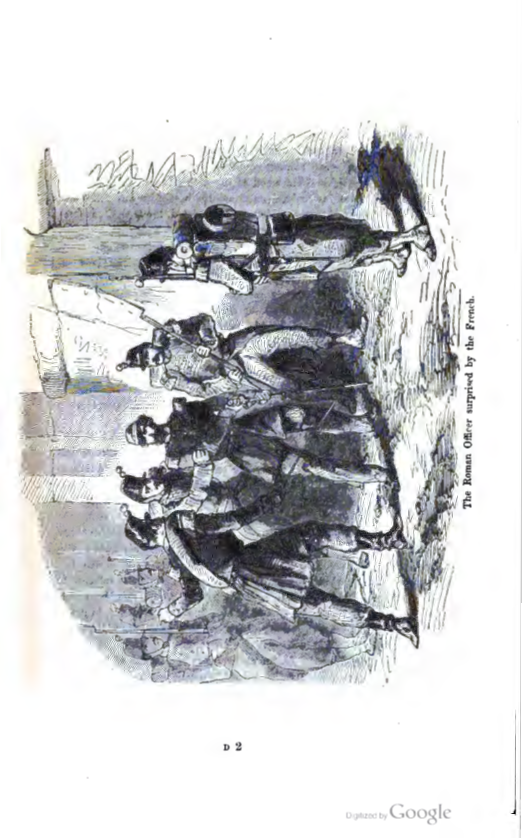