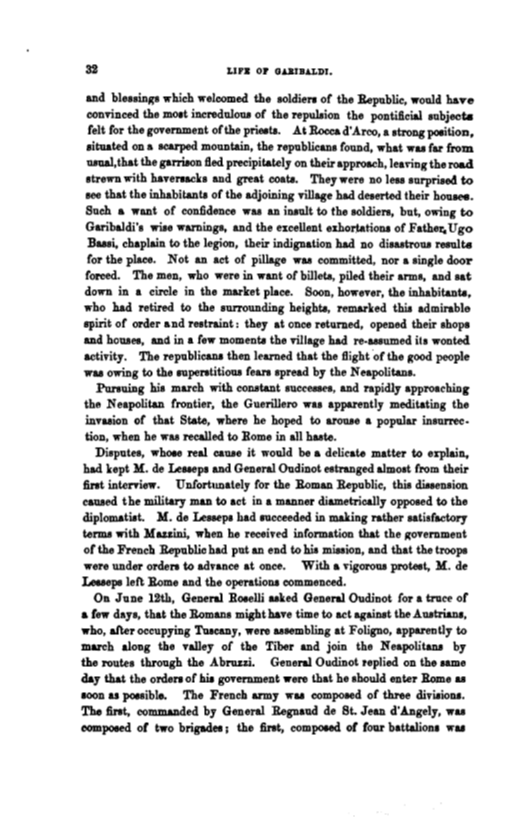 and blessings which welcomed the soldiers of the Republic, would have

convinc,ed the moat incredulous of the repulsion the pontifi.cial subjects

felt for the government ofthe priestl. At Rocca d'Arco, a strong position,

situated on a scarped mountain, the republicans found, what was far from

usual , that the garrison fled precipitately on their approach, lea ring theroad

atrewnlrith haversacks and great coats. They were no less surprised. to

see that the inhabitant. of the adjoining village had deserted their houses.

Such a want of confidence was an insult to the soldiers, but, owing to

Garibalcli's wise warnings, and the excellent exhor.tations of Father. U go

Bassi, chaplain to the legion, their indignation had no disastrous results

for the place. Not an act of pillage was committed, nor a single door

forced. The men, who were in want of billet., piled their arms, and sat

down in a circle in the market place. Soon, however, the inhabitants,

who hacl retired to the surrounding heights, remarked this admirable spirit of order and restraint: they at once returned, opened their shops and houJies, and in a few momenta the village had re-assumed its wonted activity. The republicana then learned that the flight ·of the good people was owing to the superstitious fears spread by the Neapolitans.

Pursuing his march with constant successes, and rapidly approaching

the Neapolitan frontier, the Guerillero was apparently meditating the

invasion of that State, where he hoped to arouse a popular insurrec­

tion, when he was recalled to Rome in aU haste.

Dispu1tes, whose real cause it would be a delicate matter to explain. had kept M. de Leaaeps and General Oudinot estranged almost from their first interview. Unforttmately for the Roman Republic, this dissension caused the military man to act in a manner diametrically opposed to the diplomatist. M. de Lesseps had succeeded in making rather satisfactory terms with Mauini, when he received information that the government of the Flrencb Republic had put an end to his mission, and that the troops were uncler orders to advance at once. With a vigorous protest, M. de Lesaeps ]left Rome and the operations commenced.

On Jllme 12th, General Roselli asked General Oudinot for a truce of a few days, that the Romans might have time to act against the Austrians, who, aftE,r occupying Tuscany, were assembling at Foligno, apparently to march along the valley of the Tiber and join the Neapolitans by the routE<S through the Abruzzi. General Oudinot replied on the same day that the orders of his government were that he should enter Rome as soon u }I>OBsible. The French army waa composed of three divisions. The first, commanded by General Begnaud de St. Jean d'A.ngely, was com}I>Oie<l of two brigades ; the first, composed of four battalions was 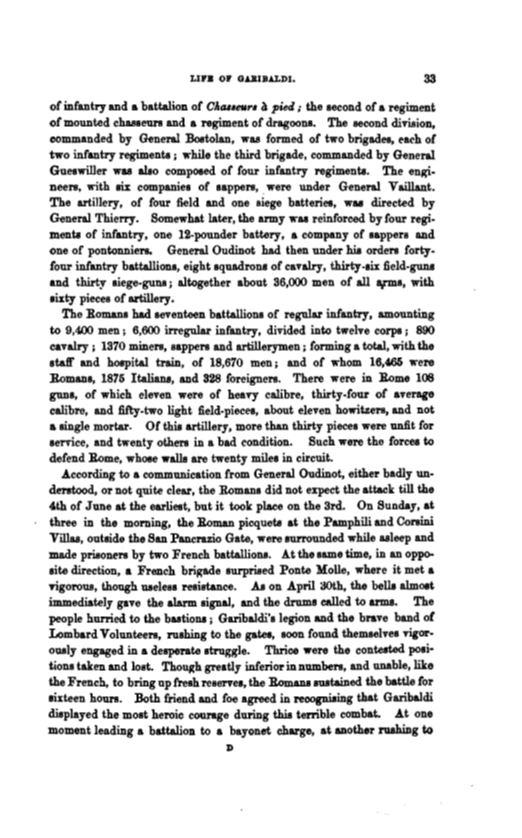 of infantry and a battalion of apied; the second of a r egiment of mounted chn.aaeura and a regiment of dragoons. The second division, commanded by General Boatolan, was formed of two brigades, earh of two infantry rE1gimenta ; while the third brigade, commanded by General Gueawiller wa:s also composed of four infantry regimente. The engi­ neers, with rn: companies of aappers, . were under General Vaillant. The artillery, of four field and one siege batteries, was directed by General Thierry. Somewhat later, the army was reinforced by four regi­ ments of infantry, one 12-pounder battery, a company of aappera and one of pontomliers. General Oudinot had then under his orders forty­ four infantry battallions, eight squadrons of cavalry, thirty-six field-guns and thirty siege-guus; altogether about 36,000 men of all apna, with sixty pieces of artillery.

The Romans had seventeen battalliona of regular infantry, amounting to 9,400 men; 6,600 irregular infantry, divided into twelve corps; 890 cavalry ; 1370 miners, aappers and artillerymen; forming a total, with the atafF and hol}>ital train, of 18,670 men; and of whom 16,465 were Romans, 1875 Italians, and 828 foreigners. There were in Rome 108 guns, of which eleven were of heavy calibre, thirty-four of average calibre, and fifty-two light field-pieces, about eleven howitzers, and not a single mortar·. Of this artillery, more than thirty pieces were unfit for service, and twenty others in a bad condition. Such were the forces to defend Rome, 'whose walls are twenty miles in circuit.

According to a communication from General Oudinot, either badly un­ derstood, or not quite clear, the Romans did not expect the attack till the 4th of June at the earliest, but it took place on the 3rd. On Sunday, at three in the morning, the Roman picquete at the Pamphili and Corsini Villas, outside the San Pancrazio Gate, were surrounded while asleep and made prisoners by two French battalliona. A.t the same time, in an oppo­ site direction, IL French brigade surprised Ponte Molle, where it met a Yigorous, thoUErh useless resistance. A.a on April :JOth, the bella almost immediately ga.ve the alarm signal, and the drums called to arms. The people hurried to the baatious ; Garibaldi's legion and the brave band of Lombard Volunteers, rushing to the gatea, soon found themselves vigor­ ously engaged in a desperate struggle. Thrice were the contested poai· tions taken and lost. Though greatly inferior innumbers, and unable, like the French, to bring up fresh reserves, the Romans auatained the battle for sixteen hours. Both friend and foe agreed in recognising that Garibaldi displayed the moat heroic courage during this terrible combat. At one moment a battalion to a bayonet charge, at another rushing to