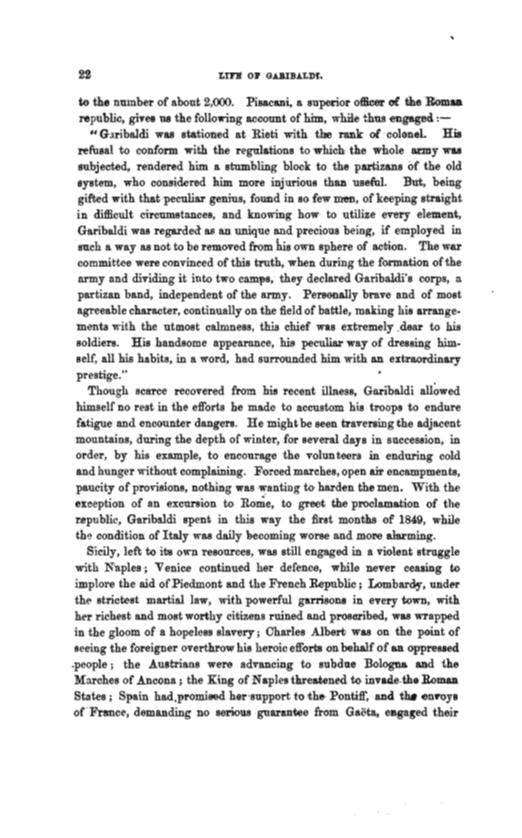 , a superior officer o£ the Romaa

republic, gives us the following account of him, while thus engaged:­

" was stationed at Rieti with the rank of ·colonel. His

subjected, rendered him a stumbling block to the partizans of the old

system, who considered him more injurious than useful. But, being

gifted with that ·peculiar genius, found in so few men, of keeping straight

in difficult circumstances, and knowing how· to utilize every element,

Garibaldi was regarded as an unique and precious being, if employed in

such a way as not to be removed from his own sphere of action. The war

committee were convinced of this truth, when during the formation ofthe

army and dividing it into two camps, they declared Garibaldi's corps, a

partizan band, independent of the army. Personally brave and of most

agreeable character, continually on the field of battle, making his arrange­

ments with the utmost calmness, this chief was extremely .dear to his

soldiers. His handsome appearance, his peculiar way of dressing him­

self, all his habits, in a word, had surrounded him with an extraordinary

Though scarce recovered from his recent illness, Garibaldi allowed

fatigue and encounter dangers. He might be seen traversing the adjacent

mountains, during the depth of winter, for several days in succession, in

order, by his example, to encourage the volunteers in enduring cold

paucity of provisions, nothing was -wanting to· harden the men. With the

exception of an excursion to Roni.e, to greet the proclamation of the

r.epublic, Garibaldi spent in this way the first months of 1849, while

the condition of Italy was daily 'becoming worse and more alarming.

Sicily, left to its own resources, was still engaged in a violent struggle with N'aples ; Venice continued her defence, while never ceasing to implore the aid of Piedmont and the French Republic; under the strictest martial law, with powerful garrisons in every town, with her richest and most worthy citizens ruined and proscribed, was wrapped in the gloom of a hopeless slavery; Charles Albert was on the point of seeing the foreigner overthrow his heroic efforts on behalf of an oppressed

.people ; the Austrians were advancing to subdue Bologna and the Marches of Ancona; the King of Naples threatened to invad.e.the RolllAD. Stntes; Spain had,promieed her·support to the Pontiff, and the envoys of Fr!tllce, demanding no serious guarantee from Gaeta, e11gaged their 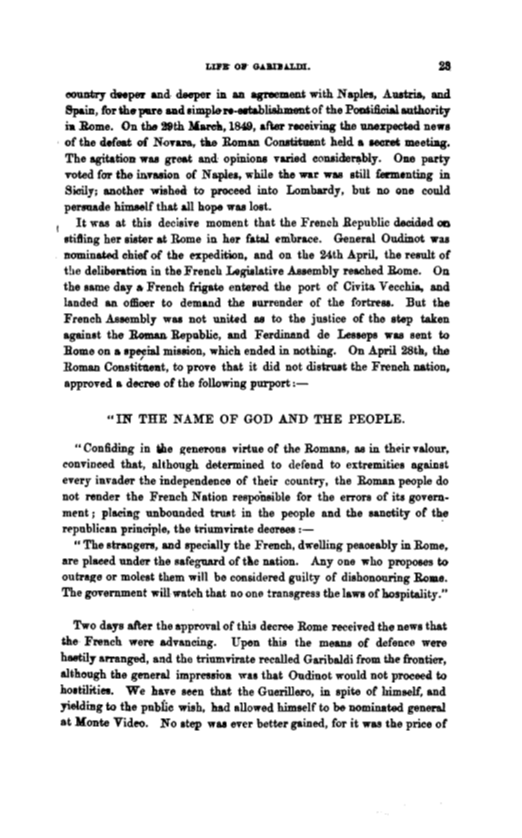 · of the of Novea. tRe Roman Constituent held a leCl'et meeting. The agitation was great and opinions varied One party voted for th•e in.Tasion of N aplea, while the war was still fermenting in Sicily;

wished to proceed into Lombardy, but no one could periRlade himself that all hope was lost.

1 It was at this decisive moment that the French Republic decided oa stifling her at Rome in her fa.tal General Oudinot was nominated chief of the expedition, and on the 24th April, the result of the deliberdiou in the French Legislative Assembly reached Rome. On the same day a French frigate entered the port of Civita V ecchia, and landed an <l>ffioer to demand the aurrender of the fortress. But the French AsSE>mbly was not united 88 to the justice of the step taken against the Roman. Republic, and Ferdinand de Lesseps was sent to Rome on a speeial misl!ion, which ended in nothing. On April 28th, the Roman Cow1iitaeat, to prove that it did not distrust the French nation, approved a decree of the following purport:­

"llf THE NAME OF GOD AND THE PEOPLE.

"Confiding in t.he generous virtue of the Romans, as in their valour, convinced that, although determined to defend to extremities against every invadErr the independence of their

, the Roman people do not render the French Nation responsible for the errors of its govern­ ment ; placi1ag unbounded trust in the people and the sanctity of the republican principle, the triumvirate deCl'ees :­

" The strangers, and specially the }'rench, dwelling peaoeably in Rome, are placed w11.der the safeguard of tle nation. Any one who proposes to outrage or molest them will be considered guilty of dishonouring Rome. The government will watch that no one transgress the laws of hospitality."

Two days after the approval of this decree Rome received the news that the French were advancing. Upen this the means of defence were haetily arranged, and the triumvirate recalled Garibaldi from the frontier, although the general impressioa. ,,.ae that Oudinot would not proceed to ho1tilitiea. 'We have seen that the Guerillero, in spite of himself, and yielding to t11e public wish, had allowed himself to b& nominated general at Monte Video. No atep was ever better gained, for it was the price of