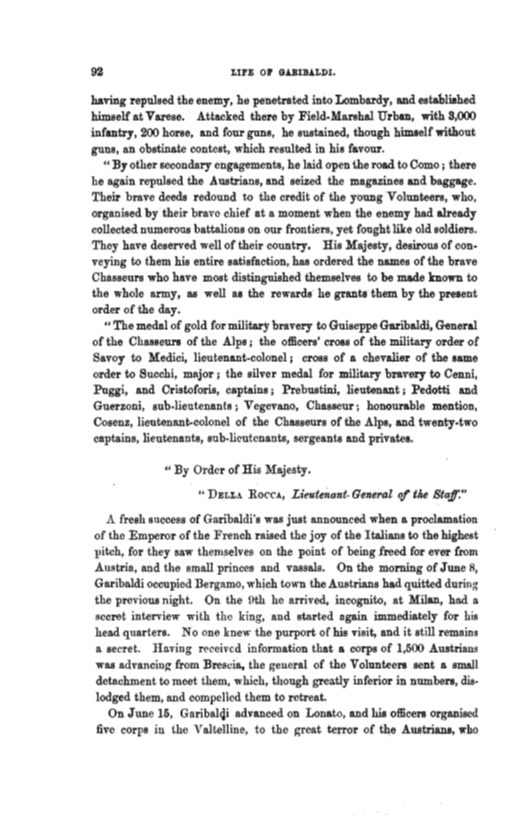 having repulsed the enemy, he penetrated into Lombardy, and established himself at V arese. Attacked there by Field-Marshal Urban, with 8,000 infantry, 200 horse, and four guns, he sustained, though himself without guns, an obstinate contest, which resulted in his favour.

":By other secondary engagements, he laid open ihe road to Como; there he again repulsed the Austrians, and seized the magazines and baggage. Their brave deeds redound to the credit of the young Volunteers, who, organised bytheir bravo chief at a moment when the enemy had already c ollectod numerous battalions on our frontiers, yet fought like old soldiers. They have deserved well of their country. His Majesty, desirous of con­ v eying to them his entire satisfaction, has ordered the names of the brave Chasseurs who have most distinguished themselves to be made known to the whole army, as well as the rewards he grants them by the present order of the day.

"The medal of gold for military bravery to Guiseppe Garibaldi, General of the Chasseurs of the Alps; the officers' cross of the military order of Savoy to Medici, lieutenant-colonel ; cross of a chevalier of the same order i;o Succhi, major ; t.he silver medal for military bravery to Cenni, Pugg i , and Cristoforis, captains; Prebustini, lieutenant; Pedotti and Guerzoni, sub-lieutenants ; Vegevano, Chasseur; honourable mention, Cosem:, lieutenant-colonel of the Chasseurs of the Alps, and twenty-two captains, lieutenants, sub-lieutenants, sergeants and privates.

" By Order of His Majesty.

pitch, for they saw themselves on the point of being freed for ever from

tria, and the small princes and vassals. On the morning of June 8,

Garibnldi occupied Bergamo, which town the Austrians had quitted during

th e previous night. On the !lth h e arrived, incognito, at Milan, had a

sec ret interview with the king, and started again immediately for his

head quarters. No one knew the purport of his visit, and it still remains

a secret. llaving received information that a corps of 1,500 Austrians

was from Brescia, the general of the Volunteers sent a small

deta c hment to meet them, which, though greatly inferior in numbers, dis­

l o dged them, and compelled them to retreat.

On June 15, Garibalqi advanced on Lonato, and his officers organised

fi ve Cl)rps in the V altelline, to the great t error of the Austrians, who 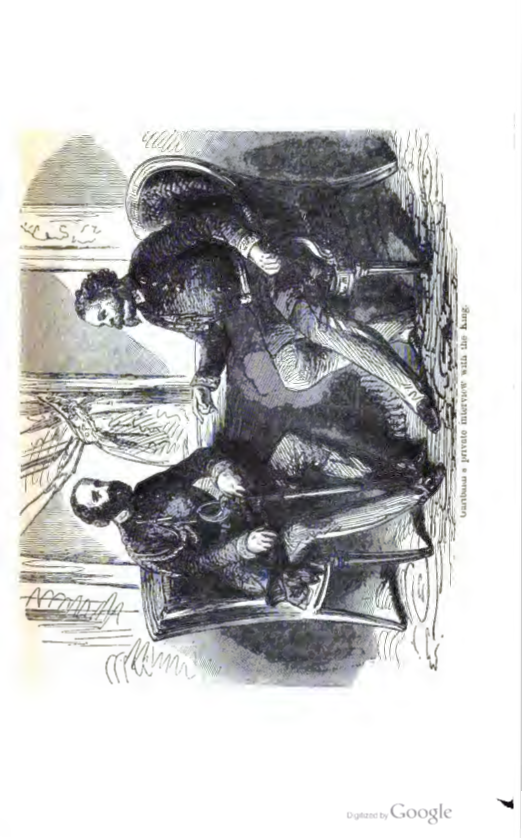