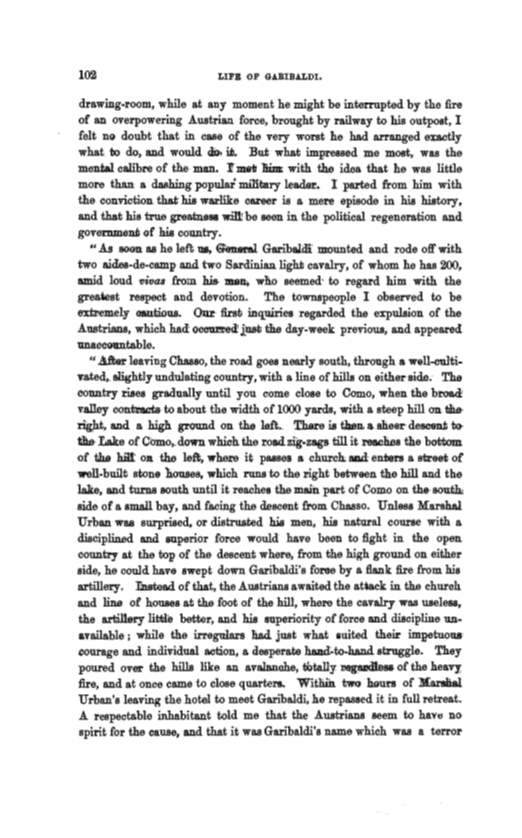 drawing-room, while at any moment he might be interrupted by the fire of an overpowering Austrian force, brought by railway to his outpost, I felt no doubt that in case of the very worst he had arranged exactly what to do, and would @, ib. Bu.t what impressed me most, was the mental calibre of the man. r:met 1iim with the idea that he was little more tha:n: a dashing popular military leader. I parted from him with the conviction that his warlike career is a mere episode in his history, and that his true greatness will! be seen in the political regeneration and governmenb of his country.

" As S(JIOn as he left us, G:erumsJ. Garibaidi mounted and rode ofF with two aides-de-camp and two Sardinian light cavalry, of whom he has 200, amid loud vivas from his-msn; who seemed' to regard him with the greaiest respect and devotion. The townspeople I observed to be extremely aantious. Our first inquiries regarded the expulsion of the .A.lll!trians, which had

the day-week previous, and appeared unaccountable.

"After leaving Chasso, the road goes nearly south, through a well-culti­ vated,. undulating country, with a line of hills on either side. The country rises gradually until you come close to Como, when the broad: valley corLtl:acta to about the width of 1000 yards, with a steep hill on the righ.t, and, a high ground on the left.. Thare is thsn. a . Bheer descen1; to­ tliB· Lake of Como,.down which the road zig•zags till it :reaches the bottom of the hiitt on the left, where it passes a church,; aad enters a street of well-built stone houses, which runs to the right between the hill and the lake, and turns south until it reaches the main part of Como on the south, side of a s1mall bay, and facing the descent from Chasso. Unless Marshal Urban was surprised, or distrusted his men, his natural course with a disciplined and superior force would have been to fight in the open country at the top of the descent where, from the high ground on either side, he could have swept down Garibaldi's force by a 11ank fire from his artillery. :ED.stead of that, the Austrians awaited the atmck in the church and line of houses at the foot of the hill, where the cavalry was useless, the artillery little better, and his superiority of force and discipline un­ available ; while the irregulars had just what 11uited their impetuous courage and individual action, a desperate ha.nd;.to-han.d struggle. They poured O'l"er the hills like an ava.lnnohe, tOtally neg81!dless of the heavy fire, and once came to close quarters. Witli.iil two hours of Marshal Urban's leaving the hotel to meet Garibaldi, he repassed it in full retreat . .A. respectable inhabitant told me that the Austrians seem to havtl no spirit for the cause, and that it was Garibaldi's name which was a terror 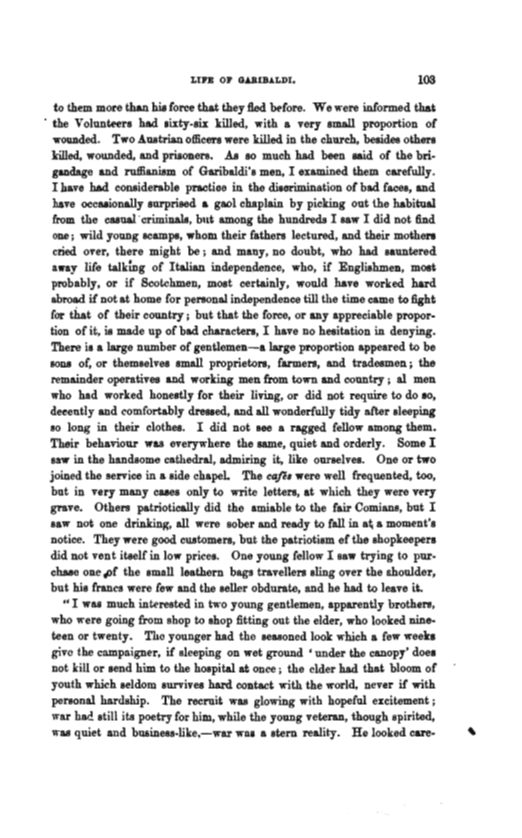 to them more than his force that they fled bf'fore. Wewere informed that

· the Volunteers had sixty-six killed, with a very small proportion of wounded. Two Austrian officers were killed in the church, besides others Jrilled, wounde1l, and prisoners. .As so much had been said of the bri­ gandage and ruffianism of Garibaldi's men, I examined them carefully. I have had considerable practioe in the discrimination of bad faces, and have occaaioruilly surprised a gaol chaplain by picking out the habitual from the caawiJ.·criminals, but among the hundreds I saw I did not find one; wild yow1g scamps, whom their fathers lectured, and their mothers cried over, th,ere might be ; and many, no doubt, who had sauntered away life ta.lkmg of Italian independence, who, if Englishmen, moat probably, or if Scotchmen, most certainly, would have worked hard abroad ifnot at home for personal independence till the time came to fight for that of th1,ir country ; but that the force, or any appreciable propor­ tion of it, is made up of bad characters, I have no hesitation in denying. There is a large number ofgentlemen-a large proportion appeared to be sons of, or thE1mselves small proprietors, farmers, and tradesmen; the remainder operatives and working men from town and country ; al men who had worked honestly for their living, or did not require to do so, decently and comfortably dressed, and all wonderfully tidy after sleeping so long in th1!ir clothes. I did not see a ragged fellow among them. Their behaviour was everywhere the 88Dle, quiet and orderly. Some I saw in the handsome cathedral, admiring it, like ourselves. One or two joined the service in a side chapeL The cafla were well frequented, too, but in very many cues only to write letters, at which they were nry grave. Othen1 patriotically did the amiable to the fair Comians, but I saw not one drinking, all were sober and ready to fall in a moment's notice. They 'l'rere good customers, but the patriotism ef the shopkeepers did not vent itself in low prices. One young fellow I saw trying to pur­ chase one pf the small leathern bags travellers sling over the shoulder, but his francs were few and the seller obdurate, and he had to leave it. "I was much interested in two young gentlemen, apparently brothers, who were going from shop to shop fitting out the elder, who looked nine­ teen or twenty. Tho younger had the seasoned look which a few weeks give the if sleeping on wet ground 'under the canopy' does not kill or send him to the hospital at once ; the elder had that bloom of youth which survives hard contact with the world, never if with personal hard11hip. The recruit was glowing with hopeful excitement; war had. still its poetry for him, while the young veteran, though spirited, was quiet and b116iness-like,-war wa11 a stern reality. Ho looked care-'