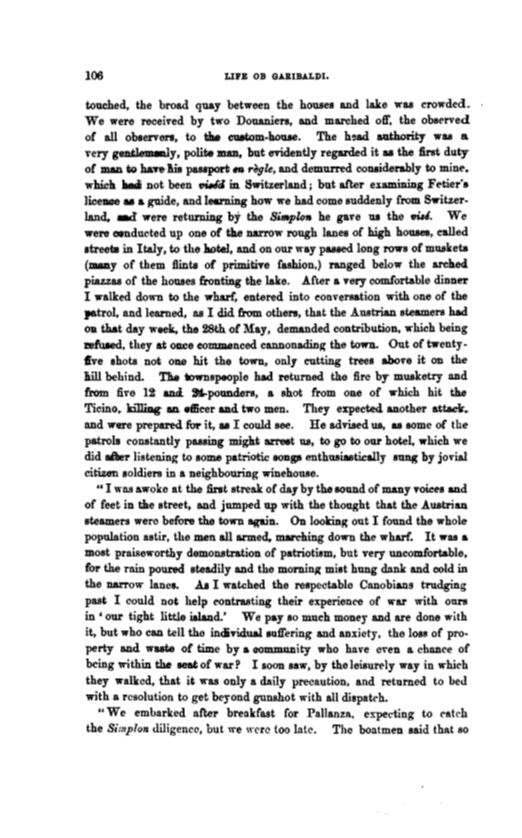 touched, the broad quay between the houses and lake was crowded. We wer·e received by two Douaniers, and marched off, the observed of all observers, to 1dut euatom-house. The head authority was a very polite man. but evidently regarded it as the first duty of man 11;Q hAn-liB passport m r6$le, and demurred considerably to mine. which hlllli not been tiVtftl in Switzerland; but after examining Fetier's

a& a guide, and learning how we had come suddenly from Switzer­ land, •d were returning by the Simplon he gave us the flial. We were conducted up one of the narrow rough lanes of high houses, called streets U[l Italy, to the Jwtel, and on our way passed long rows of muskets (D1811Y <J•f them fimts of primitive fashion,) ranged below the arched piazzas of the houses fronting the lake. After a very comfortable dinner I walked down to the wharf, entered mto conversation with one of the patrol, and learned, as I did from others, that the Austrian steamers had on that day week. the 28th of May, demanded contribution, which being refu.ed, they at once commenced cannonading the town. Out of twenty­ !ve shots not one hit the town, only cuttmg trees above it on the

li.ill behind. Tile 11ownspeople had returned the fire by musketry and from 12 arui 2'!1.-pounders, a shot from one of which hit the Tierno. ki1liag 11o11 dicer and two men. They expected. another attaclr. and wen prepared fur it, as I could see. He advised us, as some of the patrols constantly passing migh.t arreet us, to go to our hotel, which we did aillet• listening to some patriotic songJJ enthusiastically sung by jo'l'ial citizen soldiers ma neighbouring wmehouse.

"I was &woke at the first streak of day by the sound of many voices and of feet in the street, and jumped up with the thought that the Austrian steamers1 were before the town again. On lookmg out I found the whole populati,on astir, the tnen all armed, marchmg down the wharf. It was a most praiseworthy demonstration of patriotism, but very uncomfortable, for the min poured steadily and the morning mist hung dank and cold m the narrow lanes. As I watched the respectable Canobians trudging past I could not help contrasting their experience of war with ours in' our tight little island.' We pay so mnch money and are done with it, but who can tell the individus.lsuffering and anxiety, the loss of pro· perty and waste of time by a cromm.unity who have C'l'en a. chanre of being withm the seat of warP I soon saw, by the leisurrly way in which they wa.lkcd, that it was only a daily precaution, and returned to beJ with a resolution to get beyond gunshot with all dispatch.

"Wc embarked after breakfast for Pallanza, c:o..-pecting to catch the Simplon diligence, but we were too late. The boatmen said that so 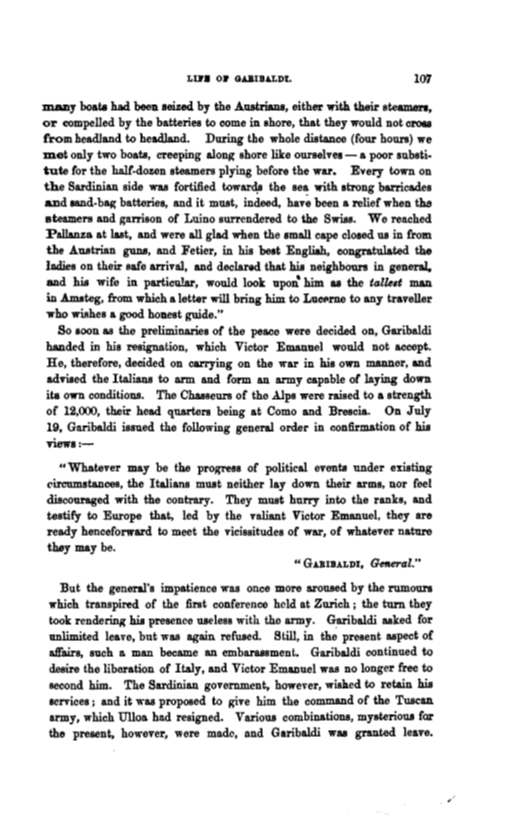 many boats hacll been seized by the Austrians, either with their steamen, or compelled by the batteries to come in shore, that they would not cross from headland to headland. During the whole distance (four hours) we :met only two boats, creeping along shore like ourselves-a poor substi­ tute for the half-dozen steamers plying before the war. Every town on the Sardinian side was fortified the sea with strong barricades and sand-bag b11tteries, and it must, indeed, been a relief when the steamers and g:1rrison of Luino surrendered to the Swiss. We reached Pallanza at last, and were all glad when the small cape closed us in from t1le Austrian guns, and Fetier, in his best English, congratulated the ladies on their 11af'e arrival, and declared tb&t his neighbours in general, and his wife in particular, would look upoJt him as the talkat man in Amsteg, fron1 which a letter will bring him to Lucflrne to any traveller

who wishes a good honest guide."

So soon as the preliminaries of the peace were decided on, Garibaldi

handed in his which Victor Emanuel would not accept.

He, therefore, <lecided on carrying on the war in his own manner, and

advised the Italians to o.rm and form an o.rmy capable of laying down

its own conditions. The Chasseurs of the Alps were raised to a strength

of 12,000, their head quarters being at Como and Brescia. On July

19, Garibaldi insued the following general order in confirmation of his

"Whatever may be the progress of political events under existing

<'ircumstances, the Italians must neither lay down their arms, nor feel

discouraged with the contrary. They must hurry into the ranks, and

testify to that, led by the valiant Victor Emanuel, they are

ready hencefof"ward to meet the vicissitudes of war, of whatever nature

But the general's impatience was once more aroused by the rumours which transpmed of the first conference held at Zurich; the turn they took rendering his presence useless with tho o.rmy. Garibaldi asked for unlimited leav13, but was again refused. Still, in the present aspect of &!fairs, such a man became an embarassment. Garibaldi continued to desire the liberation of Italy, and Victor Emanuel was no longer free to second him. 1Che Sardinian government, however, wished to retain his services ; and it was proposed to give him the command of the Tuscan army, which Ulloa had resigned. Various combinations, mysterious for the present, however, were made, and Garibaldi was granted leave.