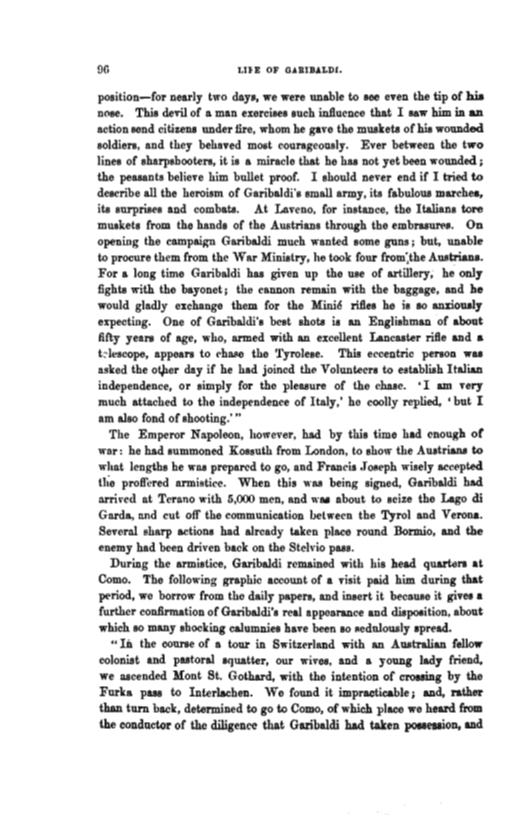 position-for nearly two days, we were unable to see even the tip of hia nose. This devil of a man exercises such influence that I saw him in an action send citizens under fire, whom he gave the muskets of his wounded soldiers, and they behaved most courageously. Ever between the two linea of sharpshooters, it is a miracle that he has not yet been wounded ; the believe him bullet proof. I should never end if I tried to describe all the heroism of Garibaldi's small army, its fabulous marchea, its surprises and combats. At Laveno, for instance, the Italians tore muskets from the hands of t.he Austrians through the embrasures. On opening the campaign Garibaldi much wanted some guns ; but, unable to procure them from the War Minislry, he took four from: the Austrians. For a long time Garibaldi has given up the use of artillery, he only fights with the bayonet; the caunon remain with the baggage, and he would. gladly exchange them for the Minic rifles he is so anxioWIIy expecting. One of Garibaldi's best shots is an Englishman of about fifty years of age, who, armed with an excellent Lancaster rifle and a telescope, appears to chll.!le the Tyrolese. This eccentric person was ked the otJ!.er day if he had joined the Volunteers to establish Italian ind e p•enden c e, or simply for the pleasure of the chase. 'I am very much attached to the independence of Italy,' he coolly replied, 'but I

am also fond of shooting.' "

The, Emperor Napoleon, however, had by this time had enough of war: he had summoned Kossuth from London, to show the Austrians to what lengths he was prepnred to go, nnd Frnnt>is wisely tl;e proffered armistice. When this was being signed, Gnribaldi had arri ve d at Tcrano with 5,000 men, and waa about to seize the Lago di Gard", and cut off the communication between the Tyrol and Verona. Severn! sharp actions had already taken place round Bormio, and the enemy had been driven back on the Stelvio pass.

During the armistice, Garibaldi remained with his head quarters at Como . The following graphic account of a visit paid him during that pt>rio,l, we borrow from the daily papers, and insert it because it gives a further confirmation of Garibaldi's real appearance and disposition, about which so many shocking calumnies have been so Redulously spread.

" !Jil. the course of a tour in Switzerland with an Australian fellow

colon i st and squatter, our wives, and a young lady friend,

we ancended Mont St. Gothard, with the intention of crossing by the

Furh pass to Interlachen. We found it impracticable; and, rather

than turn back, determined to go to Como, of which place we heard from

the c()nductor of the diligence that Garibaldi had taken poeseaaion, and 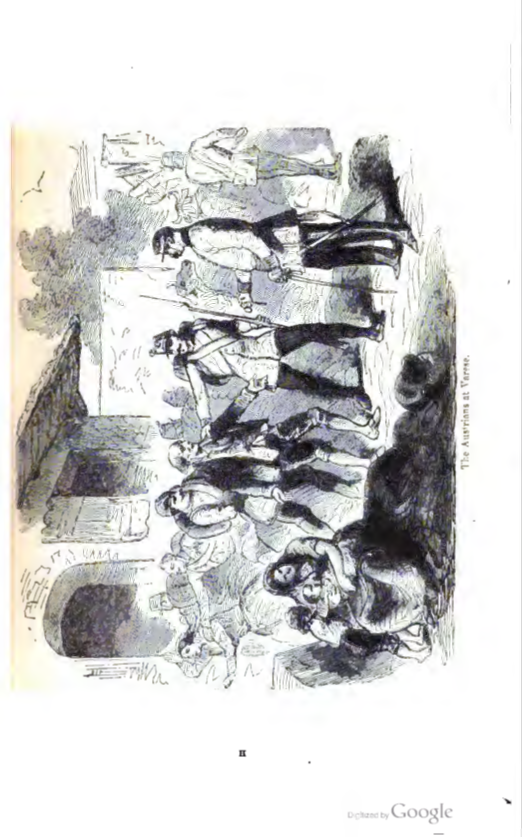