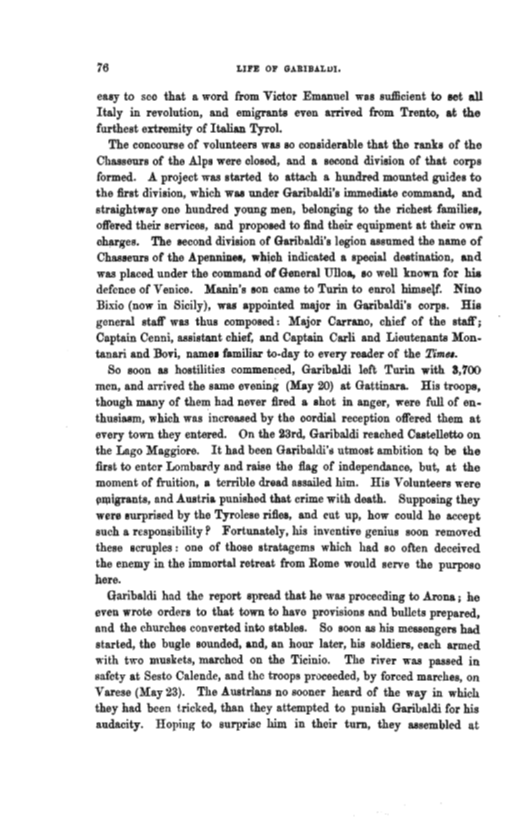 easy to sco that a word from Victor Emanuel was sufficient to set all Italy in revolution, and emigrants even arrived from Trento, at the furthest extremity of Italian Tyrol.

The concourse of volunteers was so considerable that the ranks of the Chasseurs of the Alps were closed, and a second division of that corps formed. A project was started to attach a hundred mounted guides to the first division, which was under Garibaldi's immediate command, and straightway one hundred young men, belonging to the richest families, offered their services, and proposed to find their equipment at their own charges. The aecond division of Garibaldi's legion assumed the name of Chass·eurs of the Apennines, which indicated a special destination, and was placed under the command of General Ulloa, so well known for his defence of Venice. Manin's son came to Turin to enrol himself. Nino Bixio (now in Sicily}, was appointed major in Garibaldi's corps. His genernl staff was thus composed: Major Carrano, chief of the staff; Captain Cenni, assistant chief, and Captain Carli and Lieutenants Mon­ tanari and Bovi, name1 familiar to-day to every reader of the Time6.

So soon as hostilities commenced, Garibaldi left Turin with 3,700 men, Hnd arrived the same evening (May 20) at Gattinara. His troops, though many of them had never fired a shot in anger, were full of en­ thusia,sm, which was increased by the cordial reception offered them at every town they entered. On the 23rd, Garibaldi reached Castelletto on the Lago Maggiore. It had been Garibaldi's utmost ambition tQ be the first to enter Lombardy and raise the flag of independance, but, at the moment of fruition, a terrible dread assailed him. His Volunteers were and Austria punished that crime with death. Supposing they were 1mrprised by the Tyrolese rifles, and cut up, how could he accept such a, responsibility P Fortunately, his inventive genius soon removed these scruples : one of those stratagems which l1ad so often deceived the enemy in the immortal retreat from Rome would serve the purposo here.

Garibaldi had the report spread that he was proceeding to Arona ; he even wrote orders to that town to have provisions and bullets prepared, and the churches converted into stables. So soon as his messengers had starte<l, the bugle sounded, and, an hour later, his soldiers, each armed with two muskets, marched on the Ticinio. The river was passed in safety at Sesto Calende, and the troops proceeded, by forced marches, on Vareso (May 23). The Austrians no sooner heard of the way in which they had been tricked, than they attempted to punish Garibaldi for his audacity. Hoping to surprise him in their turn, they assembled at 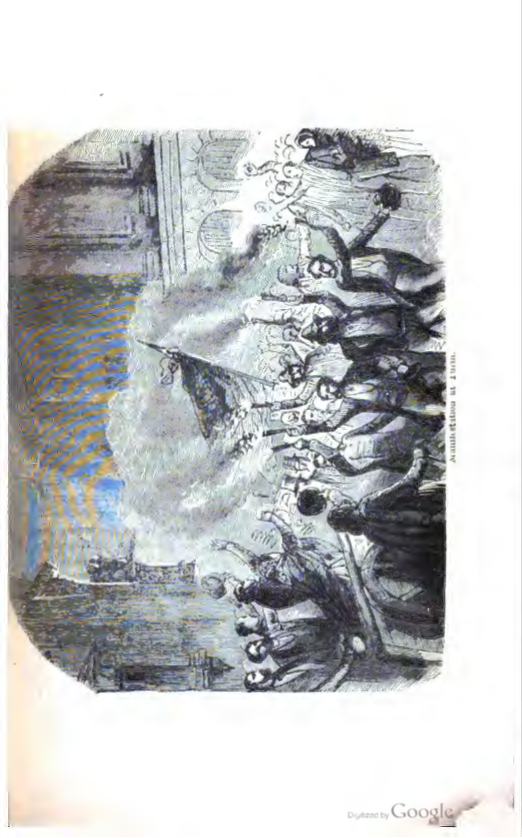