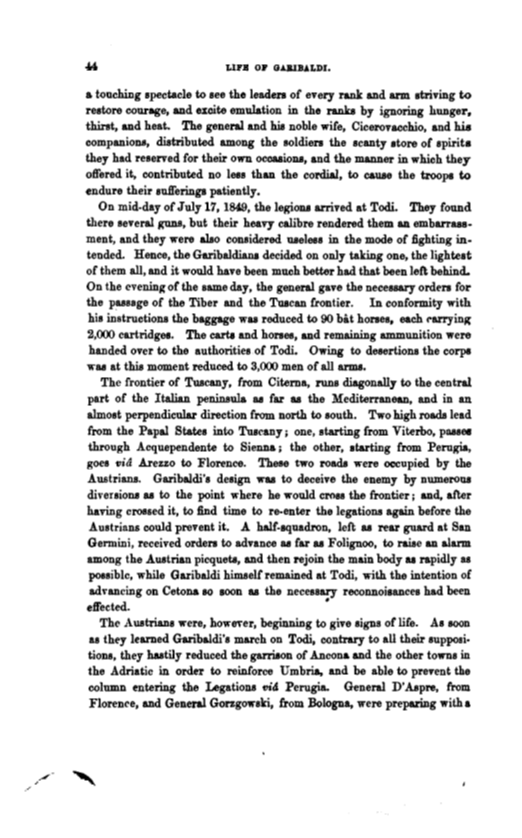 a touching spectacle to see the leaders of every rank e.nd arm striving to restore and excite emulation in the ranks by ignoring hunger. thirst, and heat. The general and his noble wife, Cicerovacchio, and his companions, distributed among the soldiers the scanty store of spirits they ha<l reserved for their own occasions, and the manner in which they offered it, contributed no less than the cordial, to cause the troops to endure their su1ferings patiently.

On mid-day of July 17, 184.9, the legions arrived at Todi. They found there several guns, but their heavy calibre rendered them an embarrass­ ment, and they were also considered useless in the mode of fighting in­ tended. Hence, the Garibaldians decided on only taking one, the lightest of them all, and it would have been much better had that been left behind. On the evening of the same day, the general gave the necessary orders for the pas11age of the Tiber and the Tuscan frontier. In conformity with his insbuctions the baggage was reduced to 90 bat horses. each l'arrying 2,000 ca.rtridgea. The carts and horses, and remaining ammunition were

handed over to the authorities .of Todi. Owing to desertions the corps was at this moment reduced to 3,000 men of all arms.

The frontier of Tuscany, from Citema, runs diagonally to the central part of the Italian peninsula as far as the Mediterranean, and in an almost perpendicular direction from north to south. Two high roads lead from the Papal States into Tuscany ; one, starting from Viterbo, passes through Acquependente to Sienna; the other, starting from Perugia, goes vi.1 .Arezzo to Florence. These two roads were occupied by the Austrians. Garibaldi's design was to deceive the enemy by numerous di ve rsions as to the point where he would cross the frontier; and, after having crossed it, to find time to re-enter the legations again before the Austrians could prevent it. A half-squadron, left as rear guard at San Germini, received orders to advance as far as Folignoo, to raise an alarm among the Austrian picqueta, and then rejoin the main body as rapidly BB possible, while Garibaldi himselfremaincd at Todi, with the intention of advancing on Cetona so soon as the necessary reconnoisances had been effected. •

Th<' Austrians were, however, beginning to give signs oflife. As soon as they learned Garibaldi's march on Todi, contrary to all their supposi­ tions, tltey hastily reduced the garrison of Ancona and the other towns in the Ad1riatic in order to reinforce Umbria, and be able to prevent the column entering the Legations Perugia. General D'Aspre, from Florenc·e, and General Gorzgowslri, from Bologna, were preparing with a 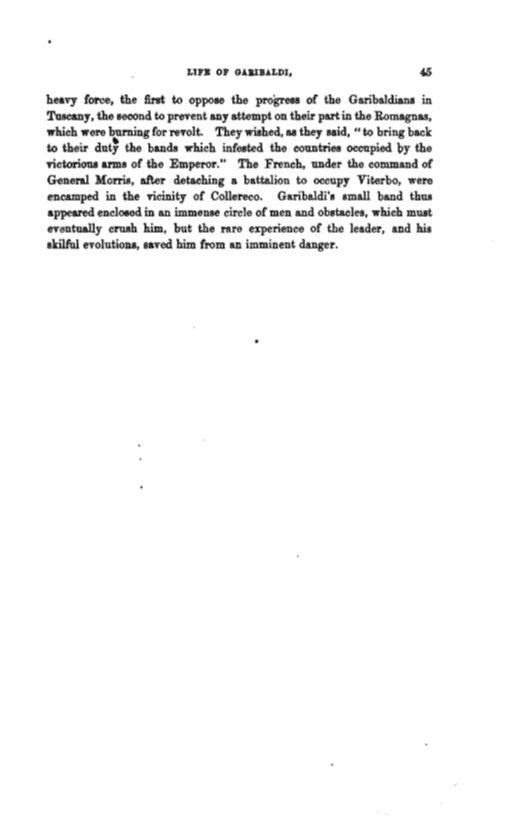 heavy force, the first to oppose the progress of the Garibaldians in Tuscany, the se,cond to prevent any attempt on their part in the Romagnas, which were burning for revolt. They wished, as they said, " to bring back to their the bands which infested the countries occupied 'by the victorious arms of the Emperor." The French, under the command of General Morri11, after detaching a battalion to occupy Viterbo, were encamped in the vicinity of Collereco. Garibaldi's small band thus appeared encloE1ed in an immense circle of men and obstacles, which must eventually crm1h him, but the rare experience of the leader, and his skilful evolutions, saved him from an imminent danger.