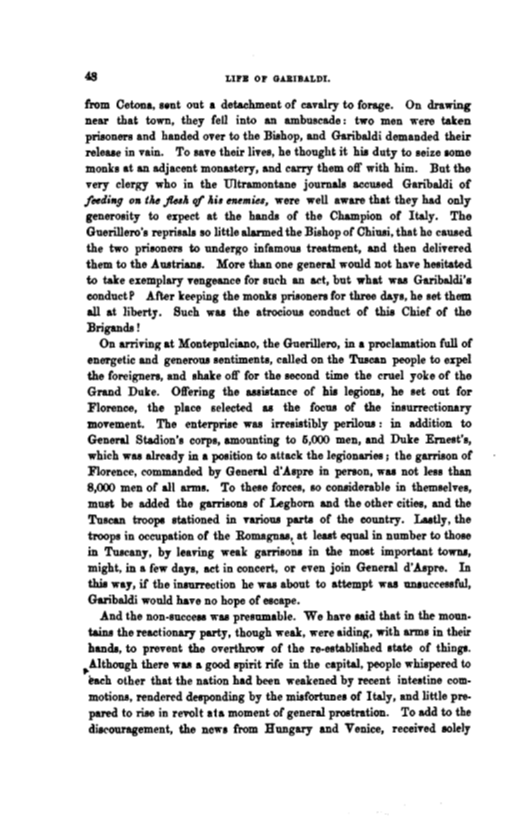 from CE1tona, sent out a detachment of cavalry to forage . On drawing near that town, they fell into an ambuscade : two men were taken prisoners and handed over to the Bishop, and Garibaldi demanded their releue in vain. To save their lives, he thought it his duty to seize aome monks at an adjacent monastery, and carry them off with him. But the very clE1rgy who in the IDtramontane journals accused Garibaldi of f«ding on tM flu! of ni1 enemie1, were well aware that they had only generosity to expect at the hands of the Champion of Italy. The GuerillE1ro's reprisals so little alarmed the Bishop of Chiusi, that he caused the two prisoners to undergo infamous treatment, and then delivered them to the Austrians. More than one general would not have hesitated to take exemplary vengeance for snt'h an act, but what wu Garibaldi's conduct P After keeping the monks prisoners for three days, he set them all at liberty. Such was the atrocious conduct of this Chief of the Brigands!

On at Montepulciano, the Guerillero, in a proclamation full of

energetic and generous sentiments, called on the Tuscan people to expel

the foreigners, and shake off for the second time the cruel yoke of the

Grand Duke. Offering the assistance of his legions, he set out for

Florence, the place selected u the focus of the insurrectionary

movemEmt. The enterprise was irresistibly perilous : in addition to

which '117as already in a position to attack the legionaries ; the garrison of

Florence, commanded by General d'Aspre in person, was not less than

8,000 men of all arms. To these forces, so considerable in themselves,

must be added the garrisons of Leghorn and the other cities, and the

Tuscan troope stationed in various parts of the country. Lastly, the

troops in occupation of the Romagnas, at least equal in number to those

in Tuac:any, by leaving weak in the most important towne,

might, in a few days, act in concert, or even join General d'Aspre. In

this wa;r, if the insurrection he was about to attempt wu unauccessfu1,

Garibaldi would have no hope of escape.

And the non-success was presumable. We han said that in the moun­

tains the reactionary party, though weak, were aiding, with arms in their hands, 1to prevent the overthrow of the re-established state of things. there was a good spirit rife in the capital, people whispered to each other that the nation had been weakened by recent int{!stine com­ motions , rendered desponding by the misfortunes of Italy, and little pre­ pared to rise in revolt ata moment of general prostration. To add to the diacourltgement, the news from Hungary and Venice, received solely 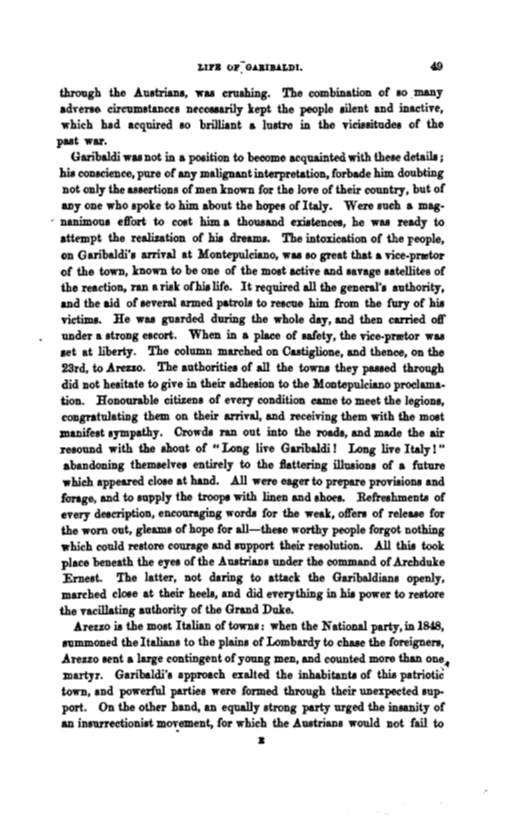 through the Austrians, was crushing. The combination of so many adverse. cirC'Dmstances necessarily kept the people silent and inactive, which had acquired so brilliant a lustre in the vicissitudes of the

Garibaldi 1rasnot in a position to become acquainted with these details ; his pure of any malignant interpretation, forbade him doubting not only the assertions of men known for the love of their country, but of any one who spoke to him about the hopes of Italy. Were such a mag­

, nanimous effort to cost him a thousand existences, he was ready attempt the realiution of his dreama. The intoxication of the reople, on Garibaldi's arrival at Montepulciano, was ao great that a vice-preetor of the town, known to be one of the moat active and savage satellites of the reaction, ran a risk ofhislife. It required all the general's authority, and the aid of several armed patrols to rescue him from the fury of his victims. HE' was guarded during the whole day, and then carried off under a strong escort. When in a place of safety, the vice-prretor was set at liberty. The column marched on Castiglione, and thence, on the 23rd, to AreJao. The authorities of all the toWDB they paased through did not hesitate to give in their adhesion to the Montepulciano proclama­ tion. Honourable citiz;ens of every condition came to meet the legions, congratulatu1g them on their arrival, and receiving them with the most manifest sympathy. Crowds ran out into the roads, and made the air resound with the about of "Long live Garibaldi! Long live Italy! " abandoning themselves entirely to the :flattering illusion& of a future which appeared close at hand. All were eager to prepare provisions and forage, and to supply the troopa with linen and shoes. :Refreshments of every description, encouraging words for the weak, offera of releaae for the worn out, gleams of hope for all-these worthy people forgot nothing which could restore courage and support their resolution. All this took place beneat!b. the eyes of the AuatriaDs under the command ofArchduke Ernest. TI1e latter, not daring to attack the Garibaldians openly, marched clo.se at their heels, and did everything in his power to restore the vacillating authority of the Grand Duke. Arezzo is the most Italian of towns: when the National party, in 1848, aummoned the Italians to the plains of Lombardy to chase the foreigners, Arezzo sent a large contingent of young men, and counted more than one .. martyr. Gnibaldi'a approach exalted the inhabitants of this town, and powerful parties were formed through their unexpected sup­ port . On the other hand, an equally strong party urged the insanity of an insurrectionist mo':ement, for which the Austrians would not fail to