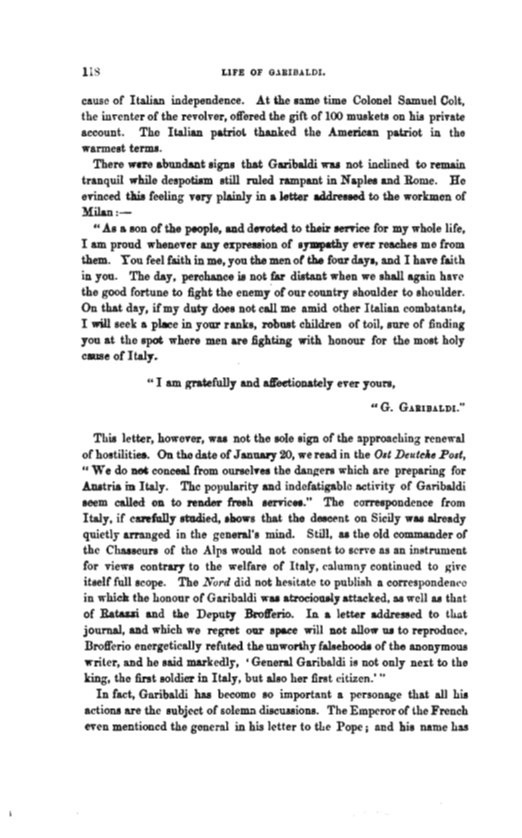 cause of Italian independence. At the same time Colonel Samuel Colt, the in>cnter of the revolver, offered the gift of 100 muskets on his private account. The Italian patriot thanked the American patriot in the warmest terms.

There were abundant signs that Garibaldi was not inclined to remain tranquil while despotism still ruled rampant in Naples and Rome. He evinced this feeling very plainly in a letter addreaaed to the workmen of Milan:-­

" As a son of the people, and dnoted to their aervice for my whole life, I am proud whenever any expreuion of sympathy ever reaches me from them . You feel faith inme, you the men of the four daya, and I have faith in you. The day, perchance is not fAr distant when we shall again have the good fortune to fight the enemy of our country shoulder to shoulder. On that day, ifmy duty does not call me amid other Italian combatantd, I will seek a place in your ranks, robust children of toil, sure of finding you at the spot where men are fighting with honour for the most holy ca.use of Italy.

" I am gratefully and affeetionately ever yours,

This letter, however, was not the sole sign of the approaching renewal of hostilities. On the date of January 20, we read in the Ost Deutclte Post, " We do nM conceal from ourselns the which are preparing for Au.atria in Italy. The popularity and indefatigable activity of Garibaldi seem called on to render fresh servicea." The correspondence from Italy, if cuefnlly studied, shows that the descent on Sicily was already quietly a.rrangcd in the general's mind. Still, as the old commander of the Ch.russeura of tho Alps would not consent to servo as an instrument for views contrary to the welfare of Italy, calumny continued to gi,·e itself full scope. Tho Nord did not hesitate to publish a correspondence in which: the honour of Garibaldi waa atrociouely attacked, as well as thnt. of Rata2w and the Deputy Bro1ferio. In a letter addreSBed to thut journal, and which we regret our space will not allow us to reproduce, Brofferio energetically refuted the unworlhy falsehood. of the anonymous writer, s.nd he said markedly, 'General Garibaldi is not only next to the king, the first soldier in Italy, but also her first citizen.' "

In fact, Garibaldi has become ao important a personage that all his

actions fLre the subject of solemn discuasions. The Emperor of the French

even mentioned the genernl in his letter to tLe Pope ; and his name hu 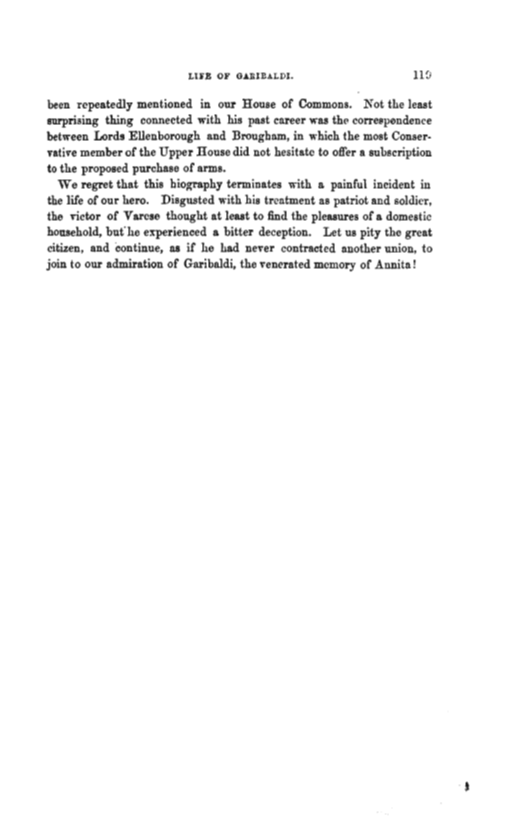 been repeatedly mentioned in our House of Commons. Not the least surprising thing connected with his past career was the correep0ndence between Lords Ellenborongh and Brougham, in which the most Conser­ vative member of the Upper House did not hesitate to offer a subscription to the proposed purchase of arms.

We regret that this biography terminates with a painful incident in the life of our hero. Disgusted with his treatment as patriot and soldier, the victor of V arese thought at least to find the pleasures of a domestic household, bufhe experienced a bitter deception. Let us pity the great citizen, and cOJ[ltinue, as if he had never contracted another union, to join to our admiration of Garibaldi, the venerated memory of Annita!