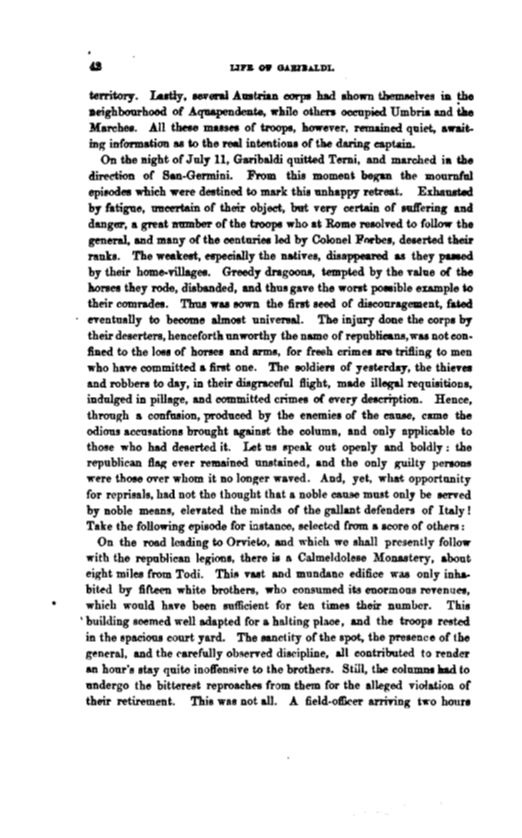 On the night of July 11, Garibaldi quitted Terni, and marched ia the direetion of San-Germini. From this moment began the mournful epittode!l which were to mark this unhappy retreat. ExhaUBted by fatig;ue, 1meertain of their object, lmt very certain of suffering and danger, a great mnnber of the troops who at Rome resolved to follow the general, and many of the centuries 100. by Colonel Fnrbes, deserted their ranks. The weakest, espeeially the natives, disappeared as they puaed by then· home-villages.

by the Talue of the lt.orset1 they l'Ode, disbanded, and thus gave the worst poBBible example to their Thus wu sown the first seed of discouragement, fded eventually to become almost universal. The injury done the corps by their deserters, hencefort:h. unworthy the name of republicans, was not eon­ fined to the Joss of hones and arms, for fresh crimes an triffing to men who han committed a first one. The soldiers of yesterday, the thieves and robbers to day, in their disgraceful Hight, made illegal requisitions, indulged in pillage, and committed crimes of every description. Hence, through. a confusion, produced by the eaemies of the ea.nse, came tbe odious brought against the columB, and only applicable to those who had it. Let us speak out openly and boldly : the 6ag ever remained unstained, and the only guilty persons were th011e over whom it no longer waved. And, yet, what opportunity for reprisals, had not the thought that a noble cause rnu!t only be served by noble means, elented the minds of the gallant defenders of Italy ! Take the following episode for instance, selected from a score of othen :

On the road leading to Orvieto, and which we shall presently follow with thEI republican legions, there is a Calmeldolese Monastery, about eight miles from Todi. vast and mundane edifice was only inha­ bited by fif'teen white brothers, who consumed its enormous reventtetl, which would have been sufficient for ten times their number. This

'building seemed well adapted for a halting place, and the troops rested in the spacious court yard. The IMUlctity of the spot, tbe presence of the general, and the carefully discipline, all contributed to render an hour's stay quite inoffensive to the brothers. Still, the colu'lllDI Bad to 11ndergo the bitterest reproachl'tl from them for the alleged violation of their retirement. This was not all. A field-officer arrinng tll"o houre 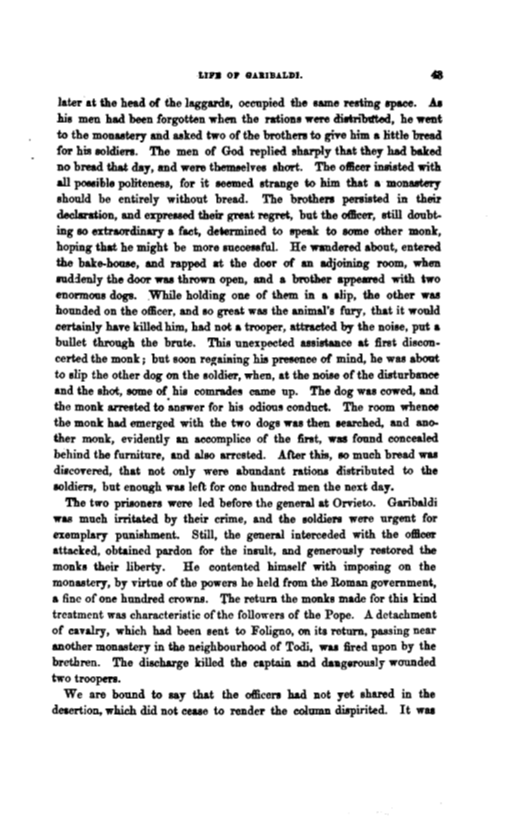 later at the head of the laggards, occupied the same resting space. AI hi11 men bad been forgotten when the rations were dinrilntted, he went to the monul;ery and uked two of the to give him a little bread for his 110ldieJ'8. The men of God replied sharply that they had baked no bread that day, and were themselves ebort. The officer insisted with all pOHi"ble politeness, for it seemed strange to him that a· monastery should be entirely without bread. The brothera peraisted in their declaration, aud e:r:preued their great regret, but the officer, still doubt­ ing so a fact, determined to speak to some other monk, hoping that he might be more aucceuful. He wandered about, entered the bake-howte, and rapped at the door of an adjoining room, when IUd:lenly the door wu thrown open, and a brother appelll'8d with two enormous dogs. .While holding one of them in a slip, the other was hounded on tile officer, and so great wu the animal's fury, that it would certainly killed him, had not a trooper, attn.eted by the noise, put a bullet through the brute. This unexpected uaistaace at first discon­ certed the mo1mk ; but soon regaiaing hia presence of mind, he was about to slip the other dog on the soldier, when, at the noise of the disturbance and the shot, lll01lle of his comrades came up. The dog was cowed, and

the monk arre11ted to for his odious conduct. The room whence the monk had emerged with the two dogs was then searched, and ano­ ther monk, e·vidently an accomplice of the first, was found concealed behind the furniture, and also arrested. After this, so much bread wu di1covered, that not only were abundant rations distributed to the soldiers, but E'nough wu left for one hundred men the next day.

The two prisoners were led before the general at Orvieto. Garibaldi was much irritated by their crime, and the BOldiers were urgent for exemplary punishment. Still, the general interceded with the officer attacked, obtained pardon for the insult, and generously restored the monks their liberty. He contented himself with imposing on the monastery, by virtue of the powers he held from the Roman government, a fine of one hundred crowns. The return the monks made for this kind treatment was characteristic ofthe followers of the Pope. A detachment of cavalry, which had been sent to Foligno, on its return, passing near another monastery in the neighbourhood of Todi, wu fired upon by the brethren. The discharge killed the captain and da11gerously wounded two troopers.

W c are bound to say that the officers had not yet shared in the desertion, whic:h did not cease to render the column dispirited. It was