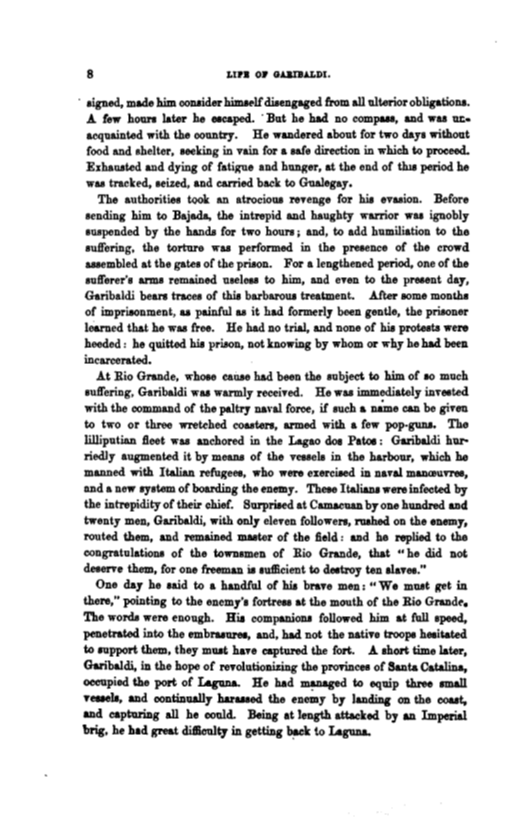 A few hours later he escaped. · But be bad no compua, and was W:•

acquainted with the country. He wandered about for two days without

food an1l shelter, seeking in vain for a safe direction in which to proceed.

Exhausted and dying of fatigue and hunger, at the end of tlus period he

was tracked, seized, and carried back to Gualegay,

The 1mthorities took an atrocious revenge for his evasion. Before sending him to Bajada, the intrepid and haughty warrior was ignobly suspend,!ld by the hands for two hours ; and, to add humiliation to the the torture was performed in the presence of the crowd assembled at the gates of the prison. For a lengthened period, one of the sufferer's arms remained useless to him, and even to the present day, Garibailli bears traces of this barbaroua treatment. After some months of imprisonment, as painful as it had formerly been gentle, the prisoner learned that he was free. He had no trial, and none of his protests were heeded : he quitted his prison, not knowing by whom or why he bad been

At Ri,o Grande, whose caU&e had been the subject to him of so much Garibaldi was warmly received. He was immediately inYested with the command of the paltry n&\'al force, if such a can be given to two or three wretched coasters, armed with a few pop-guns. The lilliputilim fleet was anchored in the Lagao dos Patoe : Gvi.baldi hur­ riedly augmented it by means of the vessels in the harbour, which he manned with Italian refugees, who were e:r:erciaed in naval manmuvree, and a ne·w system of boarding the enemy. These Italians were infected by the intrEipidity of their chief. Surprised at Camacuan byone hundred and twenty men, Garibaldi, with only eleven followers, rushed on the enemy, routed them, and remained muter of the field : and he replied to the oongratttlationa of the townsmen of Rio Grande, that "he did not deserve them, for one freeman is sufficient to destroy ten slaves."

One clay he said to a handful of his brave men : "We mlllt get in there, " :pointing to the enemy's fortress at the mouth of the Rio Grandt'. The words were enough. His companioJll followed him at full speed, penetrated into the embrasure•, and, bad not the native troops hesitated to support them, they muat have captured the fort. A short time later, Garibaldi, in the hope of revolutioming the provinces of Santa Catalina. occupied . the port of Laguna. He had to equip three small veuela, and continually haruaed the enemy by landing on the cout. and cap1mriug all he could. Being at length attacked by an Imperial brig, he had great difficulty in getting b.ack to Laguna. 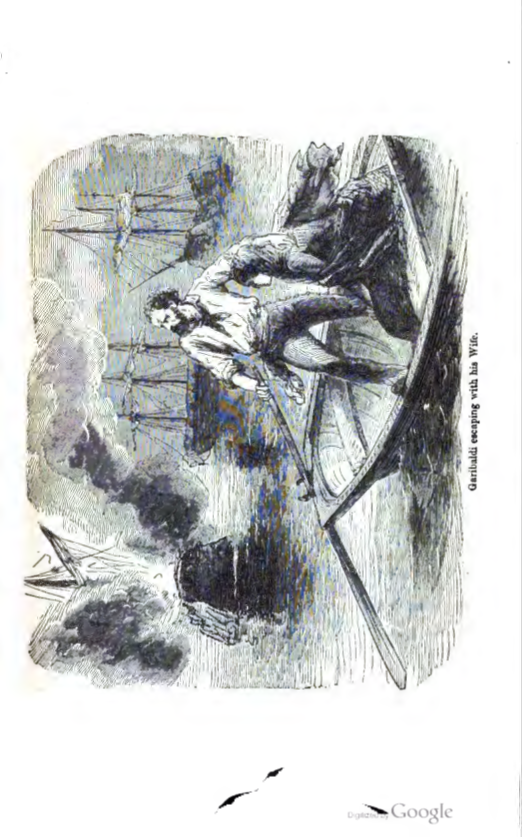