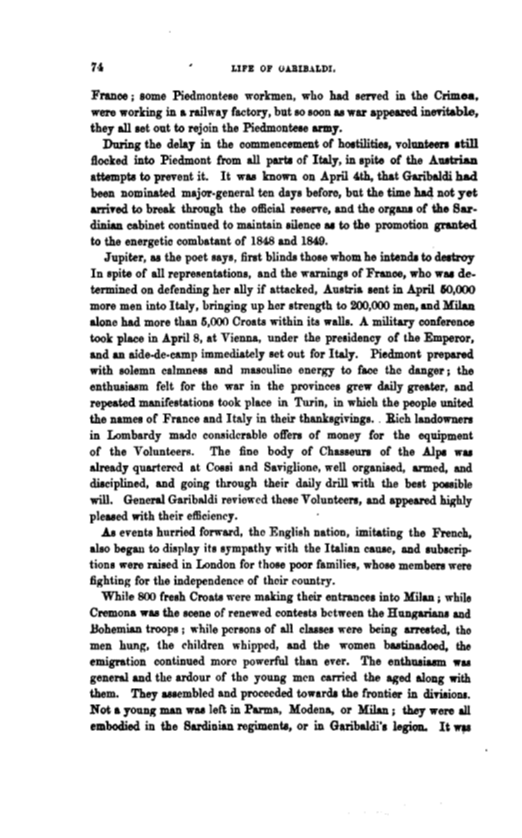 France ; some Piedmontese workmen, who had served in the Crimea, were working in a railway factory, but so soon as war appeared inevitable, they all set out to rejoin the Piedmontese army.

During the delay in the commencement of hostilities, volunteers atill flocked into Piedmont from all part. of Italy, in spite of the Austrian attemp1te to prevent it. It was known on April 4th, that Garibaldi had been nominated major-general ten days before, but the time ha4 not yet arrind to break through the official reserve, and the organa of the Sar­ dinian 11l8binet continued to maintain silence u to the promotion granted to the onergetio combatant of 1848 and 1849.

Jupiter, as the poet says, first blinds those whom he intends to destroy In of all representations, and the warnings of France, who wu de­ termintld on defending her ally if attacked, Austria. sent in April 60,000 more men into Italy, bringing up her strength to 200,000 men, and Milan alone had more than 5,000 Croats within its walls. A military conference took place in AprilS, at Vienna, under the presidency of the Emperor, and an aide-de-camp immediately set out for Italy. Piedmont prepared with solemn calmne>ss and masculine energy to face the danger ; the enthusiasm felt for the war in the provinces grew daily greater, and repe&ted manifestations took place in Turin, in which the people united the naJJ1es of France and Italy in their thanksgivings .. Rich landowners in Lombardy made considerable offers of money for the equipment of the Volunteers. The fine body of Chasseurs of the Alps wu already quartered at Cossi and Saviglione, well organised, armed, and disciplined, and going through their daily drill with the best possible will . General Garibaldi reviewed these Volunteers, and appeared highly pleased with their efficiency.

As events hurried forward, the English nation, imitating the French, also began to display its sympathy with the Italian cause, and subscrip­ tions were raised in London for those poor families, whose members were for the independence of their country.

While 800 fresh Croats were making their entrances into Milan; while Cremona was the scene of renewed contests between the Hungarians and Bohemian troops ; while persons of all classes were being arrested, tho men hung, the children whipped, and the women bastinadoed, the emigration continued more powerful than ever. The enthuaium was general and the ardour of tho young men carried the aged along with them. They UBembled and proceeded towards the frontier in dirisions. Not a young man wa11 left in Parma, Modena, or Milan ; they were all embodied in the Sardinian regiments, or in Garibaldi's legion. It ,.. 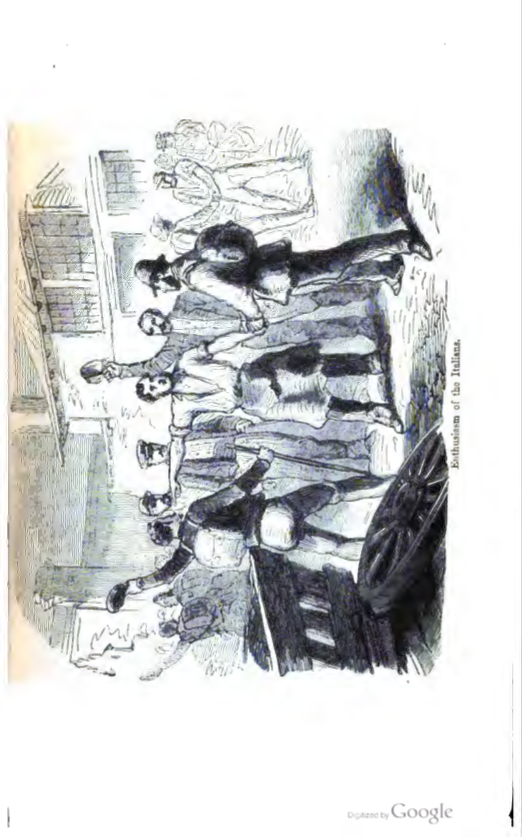