These events soon transpired in Rome, and produced a terrible impres­ sion ther·e. Great differences of opinion prevailed .among the principal authorities; the Commander-in·Chief, Roselli, urged the necessity of a general a.ttack to regain, at the bayonet's point, all that had been recently lost, but Garibaldi, whose courage could not be doubted, argued strongly against 1Jlls proposision. Informed of the despondency which, for the moment prevailed in the ranka, even among the bestofhis own followers, and the 1nutterings of treason which were circulated, the Guerillero fore­ saw that such a movement would only accelerate the final ruin. Hence. he declined any share in the responsibility of a retaliation as dangerous as it was useless. This detel'llliilation produced diaCU8sions between Garibaldi and Mazzini, who supported Roselli's proposition. The triumvir forgot to whom he was speaking, and the bitterness of his language not only the proud captain, but deeply wounded his officers, who ., had all come, like their chief, to risk their lives for the Republic. Gari­ baldi Willi greatly admired, but Mazzini was no less popular; and a dia­ agreemeJII.t between two such men could not fail to have disastrous con­ conseque,ncea. Fortunately, all trace of dissension disappeared in the presence of the common danger, and when the defence of Rome had to lie recormnenoed, there was no less ardour on the part of the people, than there was heroism on that ofthe soldiers.

The bombardment was continued without interruption, and though when compared with others with which modern history has rendered us familiar, still, if we take into aooount the present condition, as well as the antecedents of the Romans, it supplies a noble idea ofthe apiri t with which the besieged were animated. One hundred andfi.l\y bombs fell into the and several private houses were seriously injured; still, not a complaint, not a demand for surrender was heard. On the 27th, however, when tiLe rumour spread that Garibaldi, owing to a disCU8aion with the General·in-Chief, had abandoned hia head quarters at the San Pancrazio Gate, and retired into Rome, there was an immense shout from the people recalling him to his post. Manara, the young and brave chief of the Lt)mbard Volunters, hastened to him, imploring him to fight ; and, when he had consented to re&ll81lDie hia command, the shouts of the entire populati,t)n followed him to the gate.

Still, the French having drawn up twelve guns in front of the breach they had occupied on the 21st, commanded the principal points of defence let\ to the Romans, and formed other breaohea in the bastions surrounding San

On the night of the 27th, after having by their fire during t'le day destroyed the Villa Savorelli, and forced Garibaldi, who 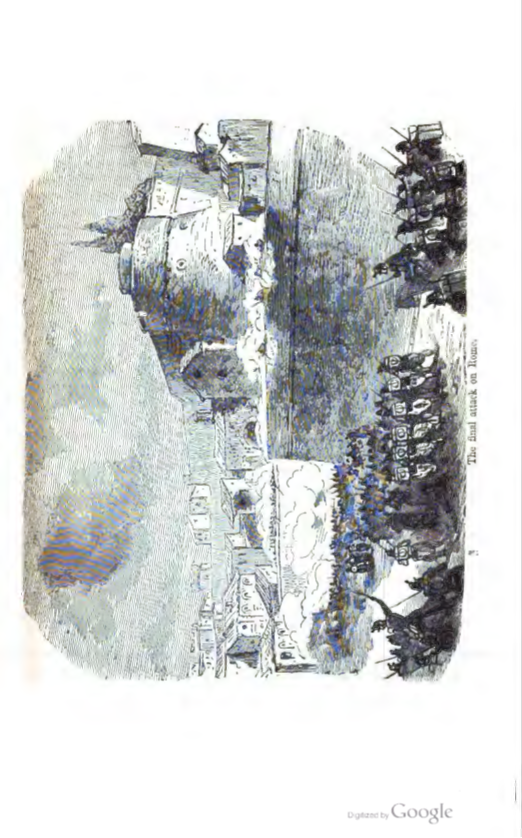