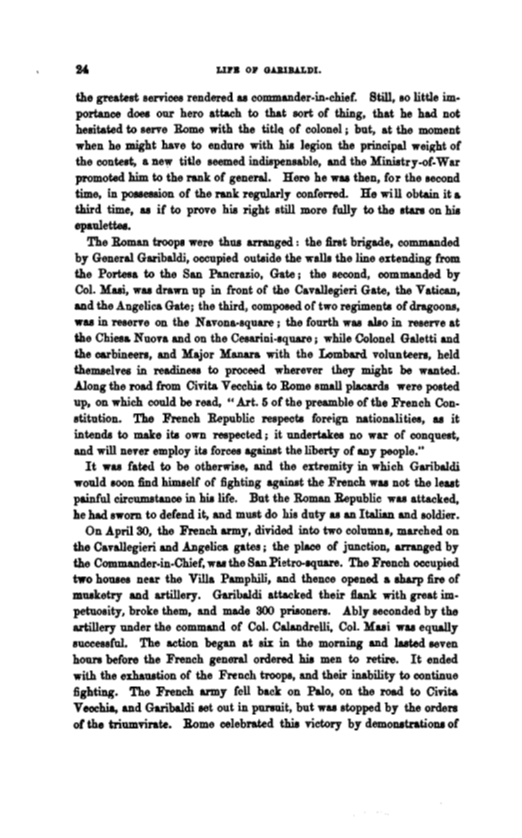 the greate,st services rendered as commander-in-chief. Still, eo little im­ portance does our hero attach to that sort of thing, that he had not hesitated 100 serve Rome with the t itlQ of colonel ; but, at the moment when he 111light have to endure with his legion the principal weight of the contest, a new tiUe seemed indispensable, and the Ministry-of-War promoted him to the rank of general. Here he was then, for the second time, in poBBession of the rank regularly conferred. He will obtain it a third as if to prove his right still more fully to the stars on his epanlettes.

The Ro:man troops were thus arranged : the first brigade, commanded by Garibaldi, occupied outside the walls the line extending from the Portesa to the San Pancrazio, Gate ; the second, commanded by Col. Masi,. was drawn np in front of the Cavallegieri Gate, the Vatican, and the Augelica Gate; the third, composed of two regiments of dragoons, was in reserve on the N avona-aquare ; the fourth was also in reserve at the Nuova and on the Cesarini·square; while Colonel Galetti and the carbineers, and Major Manara with the Lombard volunteers, held themaelve1 1 in readiness to proceed wherever they might be wanted. Along the road from Civita V ecchia to Rome small placards were posted up, on which could be read, "Art. 5 of the preamble of the French Con­ stitution. The French Republic respects forPign nationalities, as it intends to make ita own respected ; it undertakes no war of conquest, and will n•ever employ ita forces against the liberty of any people."

It was fated to be otherwise, and the extremity in which Garibaldi would soon find himself of fighting against the French was not the least painful circumstance in his life. But the Roman Republic was attacked, he had swc•m to defend it, and must do his duty as an Italian and soldier.

On April30, the French army, divided into two columna, marched on the Cavall•egieri and Angelica gates ; the place of junction, arranged by the Commander-in-Chief, was the San Pietro-aqnare. The French occupied two honseu near the Villa Pamphili, and thence opened a sharp fire of musketry and artillery. Garibaldi attacked their flank with great im­ petuosity, broke them, and made 300 prisoners. Ably seconded by the artillery under the command of Col. Calandrelli, Col. Masi was equally successful. The action began at si:r in the morning and lasted seven hours before the French general ordered his men to retire. It ended with the exhaustion of the French troops, and their inability to continue fighting. The French army fell back on Palo, on the road to Cirita V eochia, and Garibaldi set out in pursuit, but was stopped by the orders of the triumvirate. Rome celebrated this victory by demonstrations of 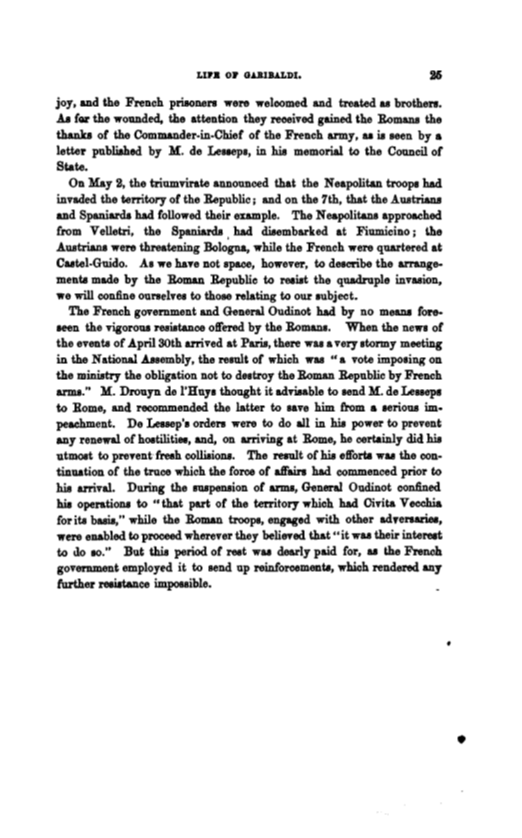 joy, and the JB"rench prisoners were welcomed and treated as brothers. As fGr the wounded, the attention they received gained the Romans the thanks of thEt Commander-in-Chief of the French army, aa is seen by a letter publialLed by M. de Lesaeps, in his memorial to the Council of State.

On May 2, the triumvirate announced that the Neapolitan troops had invaded the t4lrritory of the Republic; and on the 7th, that the Austrians and Spaniardls had followed their example. The N eapolitana approached from V elletri, the Spaniards , had disembarked at Fiumicino ; the Austrians wet-e threatening Bologna, while the French were quartered at Castel - Guido. .A.s we have not apace, however, to describe the arrange­ menta made hy the Roman Republic to resist the quadruple invasion, we will confin.e ourselves to those relating to our subject.

The French government and General Oudinot had by no means fore­ seen the vigorous resistance offered by the Romans. When the news of the events of April 30th arrived at Paris, there was a very stormy meeting in the National Assembly, the result of which was "a vote imposing on the ministry the obligation not to destroy the Roman Republic by French arms." M . Drouyn de l'Huys thought it advisable to send M . de Lessepa to Rome, ancl recommended the latter to save him from a serious im­ peachment. De Leasep's orders were to do all in his power to prevent any renewal of hoatilitiea, and, on arriving at Rome, he certainly did his utmost to prevent fresh collisions. The result of his efforts was the con­ tinuation of the truce which the force of affairs had commenced prior to his arrival. During the suspension of arms, General Oudinot confined his operatioru1 to "that part of the territory which had Civita V ecchia for its basis," while the Roman troops, engaged with other adversaries, were enabled to proceed wherever they believed that "it waa their interest to do ao." But this period of rest was dearly paid for, as the French government employed it to send up reinforcements, which rendered any further impossible.