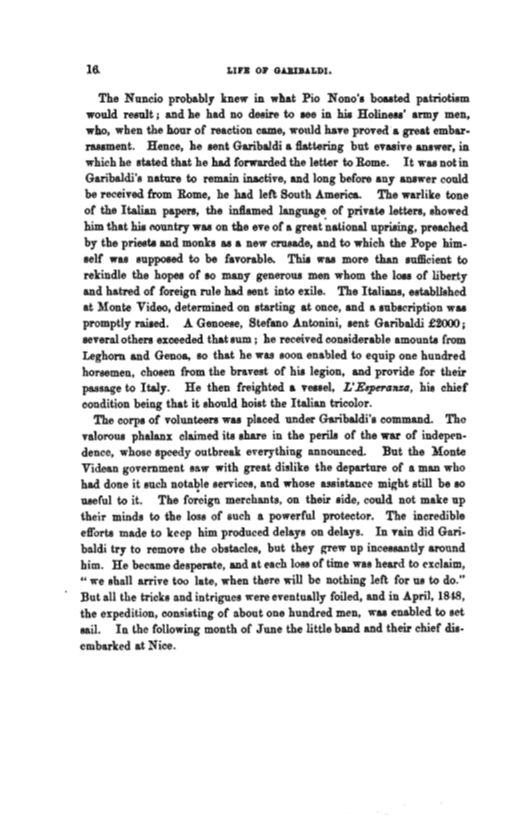 The Nuncio probably knew in what Pio Nono'a boasted patriotism would result ; and he had no desire to see in his Holiness' army men, who, wben the hour of reaction came, would have proved a great embar­ raasment. Hence, he sent Garibaldi a flattering but evasive answer, in which stated that he had forwarded the letter to Rome. It was notin GaribaMi's nature to remain inactive, and long before any answer could be recei1red from Rome, he had left; South America. The warlike tone of the Italian papers, the in1lamed language of private letters, showed him that his r.ountry was on the eve of a great :O.ational uprising, preached by the priests and monks as a new crusade, and to which the Pope him­ self was supposed to be favorable. This was more than sufficient to rekindle the hopes of so many generous men whom the loss of liberty and hatred of foreign rule had sent into exile. The Italians, established at Monto Video, determined on starting at once, and a subscription was promptly raised. A. Genoese, Stefano Antonini, sent Garibaldi £2000 ;

several others exceeded that sum ; he received considerable amounts from Leghorn and Genoa, so that he was soon enabled to equip one hundred horsemen , chosen from the bravest of his legion, and provide for their passage to Italy. He then freighted a vessel, L'Eaperan::a, his chief conditiOIIL being that it should hoist the Italian tricolor.

The corps of volunteers was placed under Garibaldi's command. The valorous phalanx claimed its share in the perils of the war of indepen­ dence, whose speedy outbreak everything announced. But the Monte Videan government saw with great dislike the departure of a man who had done it such serv ices, and whose assistance might still be so useful to it. The foreign merchants, on their side, could not make up their minds to the loss of such a powerful protector. The incredible efforts made to keep him produced delays on delays. In nin did Gari­ baldi try to remove the obstacles, but they grew up incessantly around him. He became desperate, and at each loss of time was heard to exclaim, "we shall arrive too late, when there will be nothing left for us to do." But all the tricks and intrigues were eventually foiled, and in April, 1818, the expedition, consisting of about one hundred men, was enabled to set sail. In the following month of June the little band and their chief dis­ embarked at Nice.

WHBN Garibaldi, after an absence of fourteen yea\s, once again stepped on his native shore, the narration of what had occurred during the last three months struck him with astonishment-the establishment of the French Repul•lic: con:titutions granted where only despotism had hitherto prevailed-in11nrrectionary movements at Berlin-Vienna in revolt-the Austrians expelled from Milan-Charles Albert crossing the Ticino to to tho appeal of Lombardy-Tuscany and Rome sending thou­ sands of volunteers to the Holy War-Ferdinand of Naples himself compelled, by the pressure of public opinion, to co-operate in the national struggle : never would the Guerillero have ventured to conceive such prodigies. Yes, there were spots on the brilliant picture : Pio N ono, who had blessed the warriors of liberty, as they defiled before the Quirinal, sprc!ad consternation through the Peninsula by his mournful encyclical of April 29th. The Romans were in a state of profound . agitation; even the Sardinian and Tuscan ministers protested against the papal declaratron, but it was of no avail. When La Farina, the Sicilian representative, tried to make the Pope see the injury his words would cause Italy, Pio Nono answered him," I am more Italian than you; but

you will not distinguish in ·me the Italian from the pontiff." La Farina 1 bowed his and said to himself, " He is right; the man must be a mania c who that a Pope can be an Italian."

After a marvellous career of succeBB, Charles Albert threw away all his chances by sitting down to invest Mantua, and it was at this fatal moment of in&ction that Garibaldi presented himself at the head-quarters of the king of Piedmont. With that promptitude which marks all his movements, Garibaldi h&d no sooner gained a general idea of the poeition of Italian aft'ain, than, leaving his wife and children to the care of his mother at he embarked with his comrades of the" Eaperanza," and sailed for GeliLoa. On arriving there, he hastened up to Turin, and,