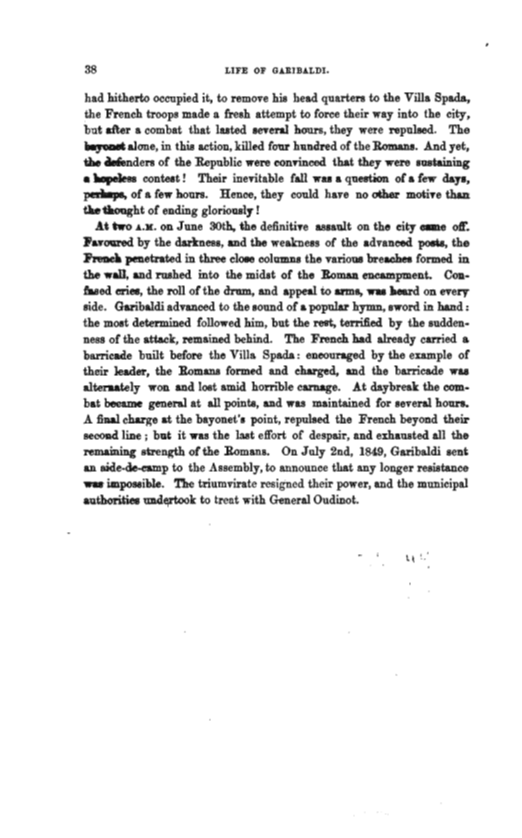 had hitherto occupied it, to remove his head quarters to the Villa Spada, the French troops made a fresh attempt to force their way into the city, but a combat that lasted several hours, they were repulsed. The ...,..,_ alone, in this action, killed four hundred of the Romans. And yet, the aefenders of the Republic were convinced that they were sustaining

• contest ! Their inevitable fall was a question of a few days, pedutpa, of a few hours. Hence, they could have no other mQtive than of ending gloriously !

At tw'l) A..ll. on June 30th, the definitive assault on the city came oft". Fa:.-oured by the darkness, and the weakness of the advanced pos&s, the FreDell in three close columns the various breaches formed in the wall, and rushed into the midst of the Roman encampment. Con­ fued eries, the roll ofthe drum. and appeal to arms, ..,..... heard on every side. advanced to the sound of a popular hymn, sword in hand: the most determined followed him, but the rest, terrified by the sudden­ ness of the attack, remained behind. The French had already carried a 'barricade built before the Villa Spada : encouraged by the example of their lea.der, the Romans formed and charged, and the barricade waa alter:aatdy won and lost amid horn"ble carnage. At daybreak the com­ bat beea:me general at all points, and was maintained for several hours. A fi11&1 charge at the bayonet's point, repulsed the French beyond their secoud line ; but it was the last effort of despair, and exhausted all the remaining strength of the Romans. On July 2nd, 1849, Garibaldi sent an aide-cie-eamp to the Assembly, to announce that any longer resistance wu · Th e triumvirate resigned their power, and the municipal authorities unde,rtook to trent with General Oudinot. 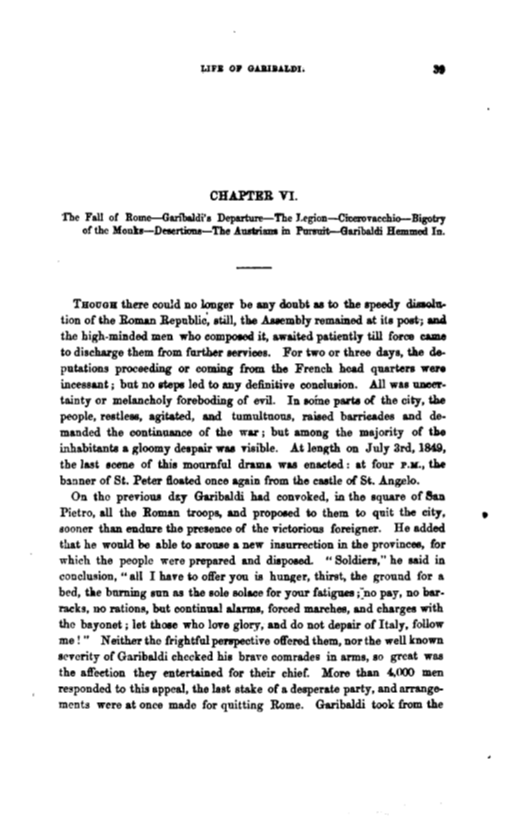 TlloUGB there oould no longer be any doubt as to the speedy dislolu­ tion of the Roman Republid, still, the .A..uembly remained at its post·; aua the high-millded men who compoted. it, &Waited patiently till force c&me to discharge them from further services. For two or three days, the de­ putations pl'<ooeed.ing or coming from the French head quarters were incessant ; bat no llteps led to any definitive oonchuion. All was UDICer­ tainty or melancholy foreboding of evil. In aoine parie of the city, the people, restlE,ss, agitated, and tumultuous, raised barricades and de­ manded the of the war ; but among the majority of tbe inhabitants a gloomy despair waa visible. At length on July 3rd, 1M9, the last acen.e of this mournful drama was enacted: at four P.K., the of St. Peter iloated once again from the castle of St. Angelo.

On tho previous d&y Garibaldi had convoked, in the square of Ban Pietro, all the Roman troops. and propoaed to them to quit the city, • sooner than t!mdure the presence of the victorious foreigner. He added tllat he would 'be able to arouse a new insurrection in the provinces, for which the people were pl\Cpared and disposed. "Soldiers," he said in conclusion, "all I have io offer you is thirst, the ground for a brd, t1ae bnr11ing sun as the sole solace for your fa.tigues pay, no bar­ racks, no ration8, but continual alarma, forced marehes, and charges with tho bayonet; let those who love glory, and do not depair of Italy, follow me ! " Neither tho frightful perspective offered them, nor the well known srvcrity of Garibaldi checked his brave comrades in arms, so great was the a.ffeetion they entertained for their chief. More than 4,000 men responded to this appeal, the last stake of a desperate party, andnrrangc­ wer e ILt once made for quitting Rome. Garibaldi took from the