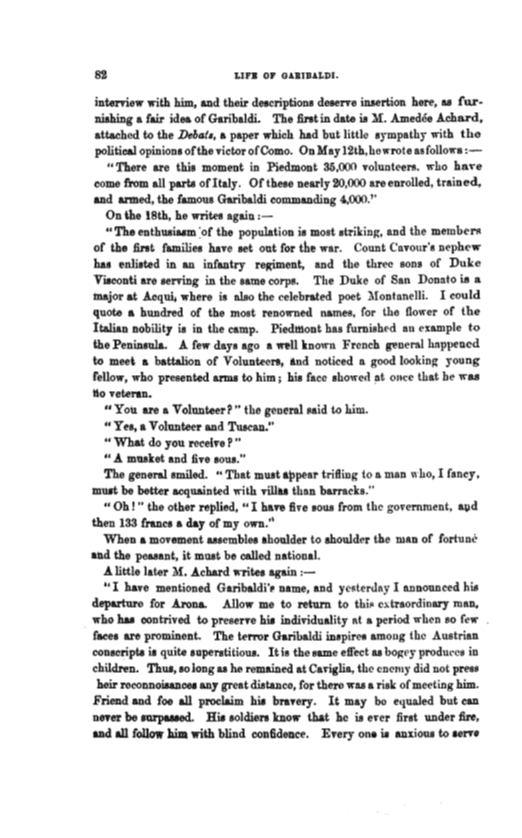 interview with him, and their descriptions deserve insertion here, as fur.

Dishing a fair idea. of Garibaldi. The first in date is M. Amedee A.chard,

attached to the Debat1, a paper which had but little sympathy with the

"There are this moment in Piedmont 35,000 volunteers. who hal"e come from all parts ofItaly. orthese nearly 20,000 are enrolled, trained. and umed, the famous Garibaldi commanding 4,000.''

" Th.e enthusiasm:of the population is most striking, and the memberA of the first families have set out for the war. Count Cavour's nephew has enlisted in an infantry regiment, and the three sons of Duke Visconti are serving in the same corps. The Duke of San Donato is a

1 where is also the celebrated poet Montnnelli. I could quote a hundred of the most renowned names, for the flower of the Italian nobility is in the camp. Piedmont has furnished an example to the Pe1ninsula. A. few days ago a well known :French general hnppencd to meE!t a battalion of Volunteers, i1nd noticed a good looking young fellow, who presented arms to him ; his face showed at once that he was

"Y c•U are a Volunteer P " the general said to him.

"A musket and five sous."

The general smiled. " That must appear trifling to a man who, I fancy ,

mUJt be better acquainted with villu than barracks." "Oh! " the other re}llied, "I have five sous from the government, a\ld then 1:13 francs a day of my own.'' WhEtn a movement assembles shoulder to shoulder the man of forhtnO:

and tho peasant, it must be called national.

"I have mentioned Garibaldi'!' name, and yesterday I announced his

departure for Arona. Allow me to return to extraordinary man, who contrived to preserve his individuality at a period when so few faces s.re prominent. The terror Garibaldi in11pires among the Aust.rian conscripts is quite superstitious. ItIs the same effect as bogey produees in childre , n. Thus, so long as he remained at Caviglin, the enemy did not press heir rcJconnoiaances any great distance, for there WllB a risk ofmeeting him. Friend and foe all proclaint his braTery. It may bo equaled but can never be 8Ul'pUied. His soldiers know that he is ever first under fire, and all follow bim with blind confidence. Every one ia anxious to •e"e 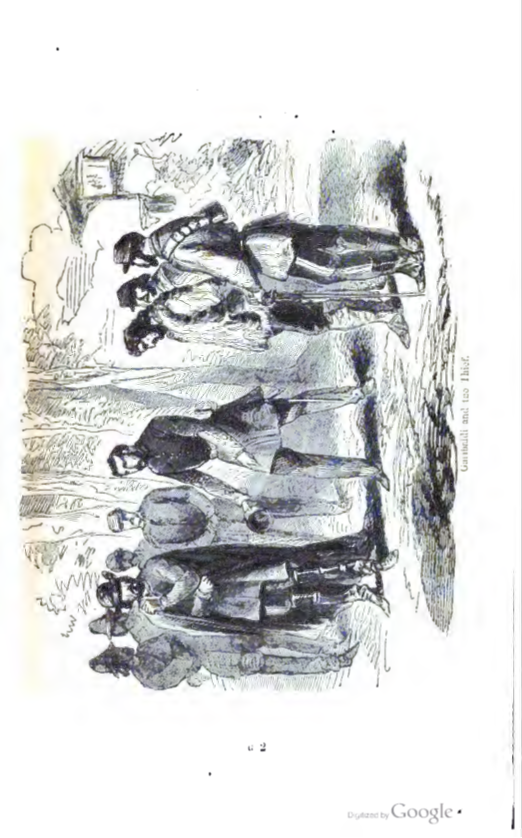