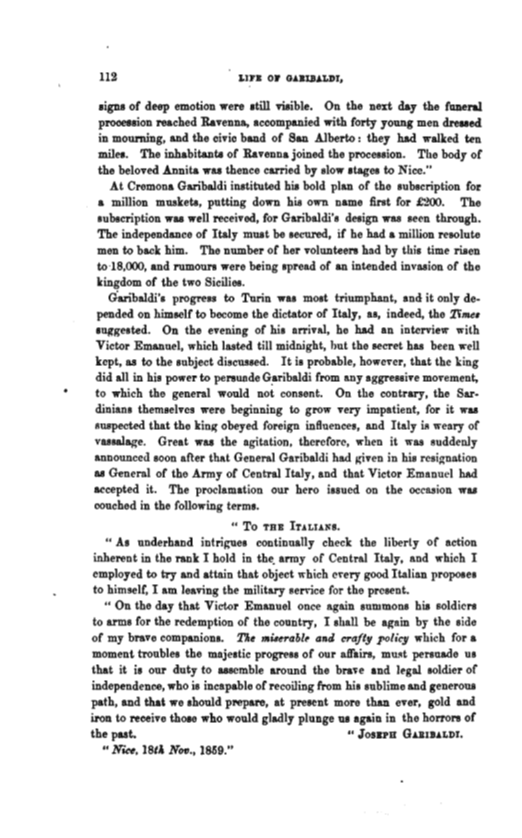 signs of deep emotion were still visible. On the next day the funeral

in mouming, and the civic band of San Alberto : they had walked ten

miles . The inhabitants of Ravenna joined the procession. The body of

the bt!loved Annita was thence carried by slow stages to Nice."

At Cremona Garibaldi instituted his bold plan of the subscription for

a million muskets, putting down his own name first for £'200. The

was well received, for Garibaldi's design was seen through.

The independance of Italy must be seeured, if he had a million resolute

men t,o back him. The number of her volunteers had by this time risen

to · l8,000, and rumours were being spread of an intended invasion of the

kingdom of the two Sicilies.

Garibaldi's progress to Tnrin was most triumphant, and it only de­

pended on himself to become the dictator of Italy, as, indeed, the

suggented. On the evening of his arrival, he had an interview with

Victo1• Emanuel, which lasted till midnight, hut the secret has been well

kept, 11B to the subject discussed. It is probable, however, that the king

did all in his power to persuade G.aribaldi from any aggressive mo'l"'emcnt,

to which the general would not consent. On the contrary, the Sar­

dinian& themselves were beginning to grow very impatient, for it was

suspected that the king obeyed foreign influences, and Italy is weary of

Great was the agitation, therefore, when it was suddenly

announced soon after that General Garibaldi had in his resignation

as GeiLeral of the Army of Central Italy, and that Victor Emanuel had

it. The proclamation our hero issued on the occasion was

" Ae1 underhand intrigues continually check the liberty of aetion inherent in the rank I hold in the. army of Centro.l Italy, and which I employed to try and attain that object which every good Italian proposes to himself, I am leaving the military service for the present.

" On the day that Victor Emanuel once again summons his soldiers

&rmiB for the redemption of the country, I shall be again by the side of my brave companions. Tlte aracl crafty poliC!J which for a moment troubles tho majestic progress of our affairs, persuade us that it is our duty to assemble around the brave and lego.l soldier of indepe11dence, who is incapable of recoiling from his sublime and gencroua path, and that we should prepare, at present more than ever, gold and iron to receive those who would gladly plunge us again in the horron of the past. " JosBPH GJ.lUBJ.LDI. 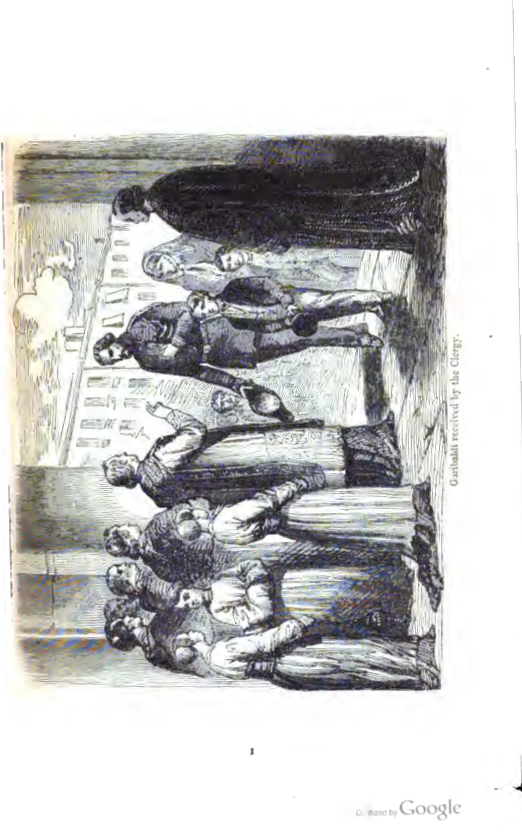