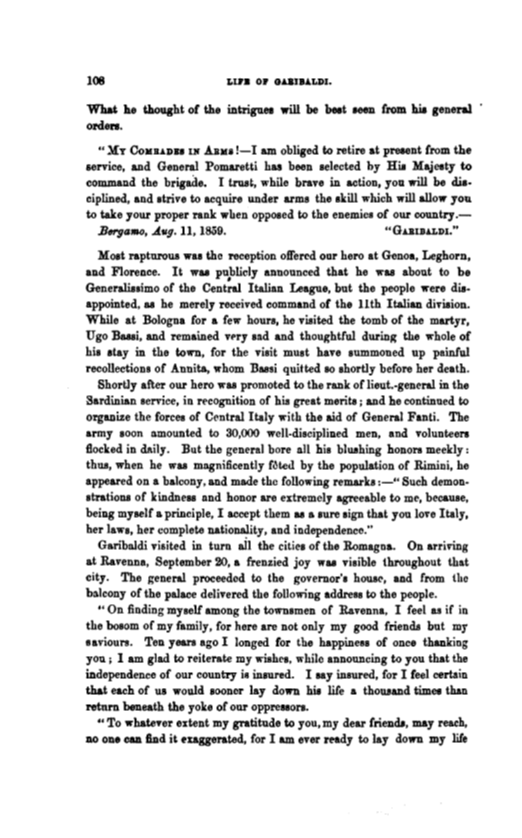 What be thought of the intrigues will be beat 1een from hia general · orders.

"lfy CoHB..I.DBI IN ABHa !-I am obliged to retire at from the service, and General Pomaretti has been selected by His Majesty to comman.d the brigade. I trust, while brave in action, you will be dis­ ciplined, and strive to acquire under arms the skill which will allow you to take your proper rank when opposed to the enemies of our country.­

Most rapturous was the reception offered our hero at Genoa, Leghorn, and Florence. It was pu,blicly announced that he was about to be Generalissimo of the Central Italian League, but the people were dis­ appointod, as he merely received command of the 11th Italian division. While ILt Bologna for a few hours, he visited the tomb of the martyr, U go Bat1si, and remained very snd and thoughtful during the whole of his atay in the town, for the visit must have summoned up painful recollec1 ; ions of Annita, whom Bassi quitted so shortly before her death.

Short]y after our hero was promoted to the rank of lieut.-general in the Sardinum service, in recognition of his great merits ; and be continued to the forces of Central Italy with the aid of General Fanti. The army soon amounted to 30,000 well-disciplined men, and volunteers flocked in daily. But the general bore all his bl118hing honors meekly: thus, when he was magnificently fj)tetl by the population of Rimini, he appeared on a balcony, and made the following remarks :-" Such demon­ stratiowl of kindness and honor are extremely agreeable to m£>, because, being myself a principle, I accept them as a sure sign that you love Italy, her law11, her complete nationality, and independence."

Garibaldi visited in turn ail the cities of the Romagna. On arriving at Ravenna, September 20, a frenzied joy was visible throughout that city. The general proceeded to the governor's house, and from the balcony of tho palace delivered the following address to tho people.

" On finding myself among the townsmen of Ravenna, I feel as if in the bosom of my family, for here arc not only my good friends but my savioul'l!l. Ten years ago I longed for tho happiness of once thanking you; I am glad to reiterate my wish£>s, while announcing to you that the independence of our country is insured. I say insured, for I feel certain that each of us would sooner lay down his life a thowand times than retnrn ·beneath the yoke of our oppressors.

" To 11rhatever extent my gratitude to you, my dear friends, may reach, no one c1an &nd it exaggerated, for I am ever ready to lay down my life 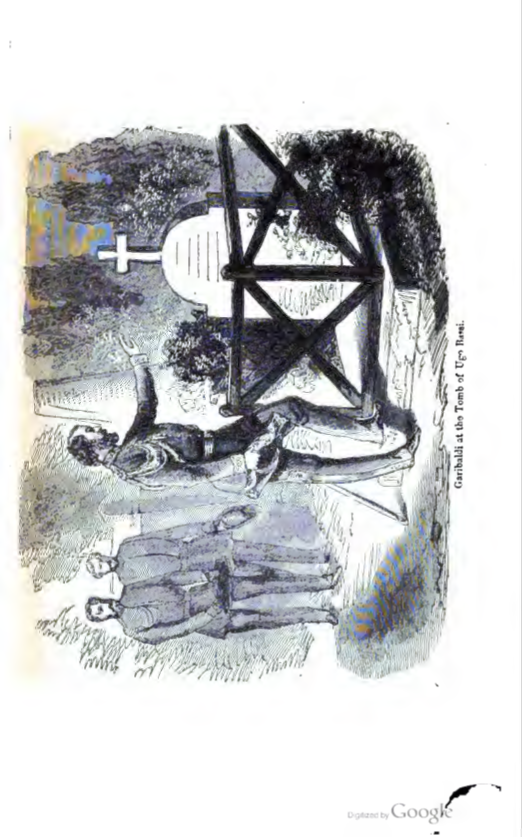