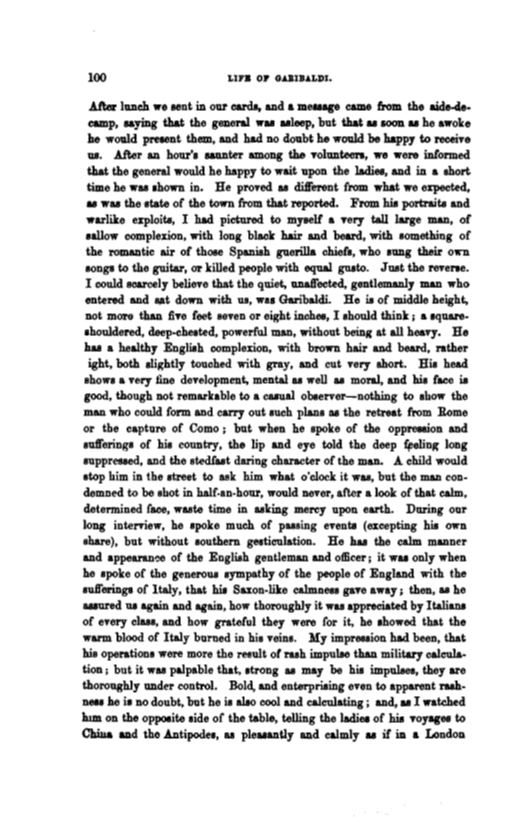 .After lunch we sent in our carda, and a meuage came from the aide-de­ camp, saying that the general waa aaleep, but that aa soon aa he awoke he would present them, and had no doubt he would be happy to receive us. After an hour'a aaunter among the Tolunteera, we were informed that the general would he happy to wait upon the ladies, and in a short time he was shown in. He proved as different from what we expected, as was the ·state of the town from that reported. From his portraits and warlike exploits, I had pictured to myself a very tall large man, of sallow with long black hair and beard, with something of the romantic air of those Spanish guerilla chiefs, who sung their 01rn songs to the guitar, or killed people with equal gusto. Just the revene. I oould 1!carcely believe that the quiet, unaffected, gentlemanly man who entered and 1111t down with us, was Garibaldi. He is of middle height, not more than five feet seven or eight inches, I should think ; a square­ shouldet·ed, deep-cheated, powerful man, without being at all heavy. He

has a W!althy English oomplexion, with brown hair and beard, rather

ight, both slightly touched with gray, and cut very short. His head shows a very fine development, mental as well as moral, and his face is good, though not remarkable to a casual observer-nothing to show the man who could form and carry out such plana ns the retreat from Rome or the of Como ; but when he spoke of the oppression and sufferings of his country, the lip and eye told the deep long suppressed, and the stedfast daring character of the man. A. child would stop him in the street to ask him what o'clock it was, but the man con­ demned to be shot in half.an.hour, would never, after a look of that calm, determined face, waste time in asking mercy upon earth. During our long interview, he spoke much of passing events (excepting his own share), hut without southern gesticulation. He has the calm manner and appearan'!O of the English gentleman and officer; it wu only when he spokcl of the generous sympathy of the people of England with the suJferings of Italy, that hi& Saxon-like calmne&s gave away; then, as he assured us again and again, how thoroughly it was appreciated by Italiaus of every class, and how grateful they were for it, he ahowed that the warm blood of Italy burned in his veins. My impression had been, that his open1tions were more the result of rash impulse than military calcula­ tion; but it was palpable that, atrong as may be his impulses, they are thoroughly under control. Bold, and enterprising even to apparent rub­ ness he i1 no doubt, but he is also oool and calculating ; and, 88 I watched hun on tb.e opposite aide of the table, telling the ladies of his voyages to ChWa and tho Antipodes, as pleuantly and calmly 88 if in a London 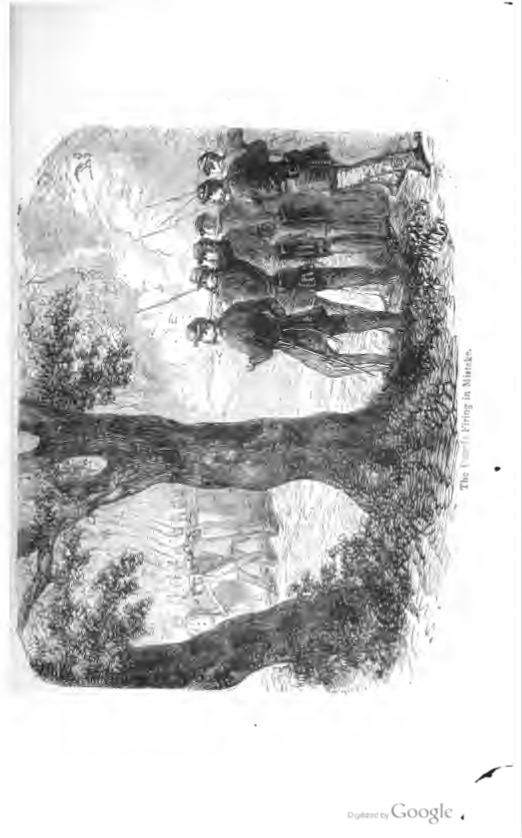