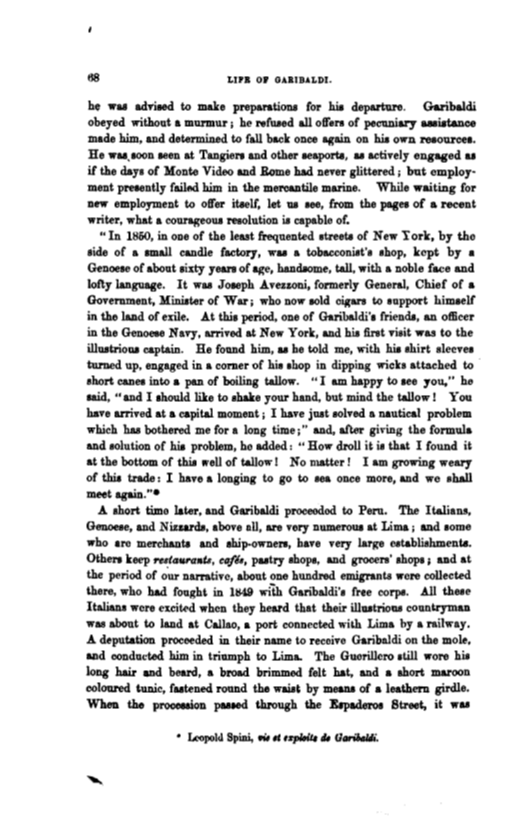 he was advised to make preparations for his departure. Garibaldi obeyed withont a murmur ; he refused all offers of pecuniary aasiatance made him, and determined to fall back once again on his own resources. He was. soon seen at Tangiers and other seaports, as actively engaged u if the days of Monte Video and Rome had never glittered; but employ­ ment pr-esently failfld him in the mercantile marine. While waiting for new emtployment to offer itself, let na see, from the pages of a recent writer, what a courageous resolution ia capable of.

"In 1850, in one of the least frequented streets of New York, by the side of a small candle factory, was a tobacconist's shop, kept by a Genoes1' of about sixty years of age, handsome, tall, with a noble face and lofty language. It was Joseph Avezzoni, formerly General, Chief of a Government, Minister of War; who now sold cigars to support himsell in the ln.nd of exile. At this period, one of Garibaldi's friends, an officer in the G·enoese Navy, arrived at New York, and hia first visit was to the illustrious captain. He fonnd him, as be told me, with hia shirt sleeves turned up, engaged in a corner of hia ahop in dipping wicks attached to abort canes into a pan of boiling tallow. "I am happy to see you," he said, " a.nd I should lilr.e to shake your hand, but mind the tallow ! You have arrived at a capital moment ; I have just solved a nautical problem which 'baa bothered me for a long time;" and, after giving the formula and solution of his problem, he added: "How droll it is that I found it at the bottom of this well of tallow ! No matter ! I am growing weary of this trade: I have a longing to go to sea once more, and we shall meet again."•

A sh<•rt timo later, and Garibaldi proceeded to Peru. The Italians, Genoese,, and Nizzard:s, above nll, are very numerous at Lima; and some who aro merchants and ship-owners, have very large establishments. Others bt'P restaurants, cafe8, pastry shops, and grocers' ahops ; and at the period of o.ur narrative, about one hundred emigrants were collected there, who had fought in ltW.IJ with Garibaldi's free corps. All these Italians were excited when they heard that their illustrious countryman was about to land at Callao, a port connected with Lima by a railway. A depul;ation proceeded i.n their name to receive Garibaldi on the mole, and conducted him in triumph to Lima. The Gucrillcro still wore his long hair and beard, a broad brimmed felt hat, and a abort maroon tunic, fastened round the waist by meaua of a Ieathem girdle. When the proceaaion pasted through the Eapaderos Street, it was 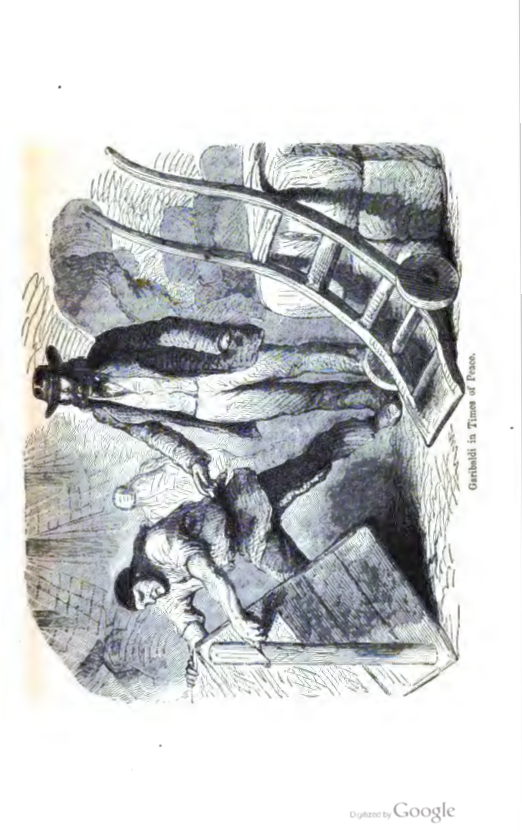