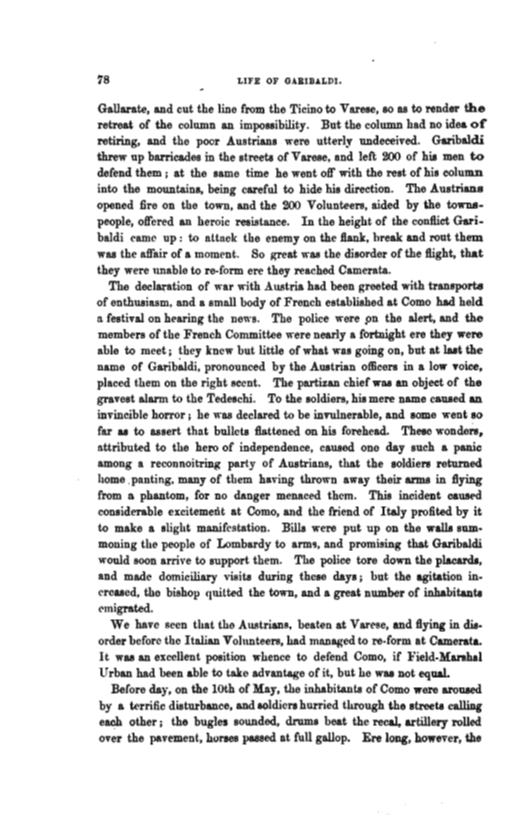 Gallarate, and cut the line from the Ticino to V arese, so as to render the retreat of the column an impossibility. But the column had no idea of retiring, and the poor Austrians were utterly undeceived. Garibaldi threw up barricades in the streets of Varese, and left 200 of his men to defend them ; at the same time he went off with the rest of his column into the mountains, being careful to hide hls direction. The Austrians opened fire on the town, and the 200 Volunteers, aided by Ule towns­ people, offered an heroic resistance. In the height of the conflict Gari­ baldi cantc up : to attack the enemy on the flank, break and rout them was the affair of a moment . So great was the disorder of the flight, that they were tmable to re-form ere they reached Camerata.

The declaration of war with Austria had been greeted with transports of enthusiasm, and a small body of French established at Como had held a festival on hearing the news. The police were pn the alert, and the members of the French Committee were nearly a fortnight ere they were able to meet; they knew but little of what was going on, but at lalt the name of Garib;udi, pronounced by the Austrian officers in a low voice, placed t.hem on the right scent. The partizan chief was an object of the gravest alarm to the Tedeschi. To the soldiers, his mere name caused an invincible horror ; he was declared to be invulnerable, and some went so far aa to assert that bullets fl.attened on his forehead. These wonders, attributed to the hero of independence, caused one day such a panic among a reconnoitring party of Austrians, that the soldiers returned home .panting, many of them having thrown away their arms in flying from a phantom, for no danger menaced them. Thls incident cauaed considerable excitement at Como, and the friend of Italy profited by it to make a slight manifestation . Bills were put up on the walls sum­ moning the people of Lombardy to and promising that Garibaldi would soon arrive to support them. The police tore down the placards, and made domiciliary visits during these days ; but the agitation in­ creased, the bishop quitted the town, and a great number of inhabitants r migrated.

We have seen that the Austrians, beaten at V arese, and flying in dis­ order before the Italian Volunteers, had mnnaged to re-form at Camerata. It waa an excellent position whence to defend Como, if :Field-Marshal Urban had been able to take advnntage of it, but he was not equal.

Before day, on the lOth of May, the inhabitants of Como were aroused by a terrific disturbance, and aoldiers hurried through the streets calling each other ; the bugles sounded, drums beat the recal, artillery rolled over the pavement, hones passed at full gallop. Ere long, however, the 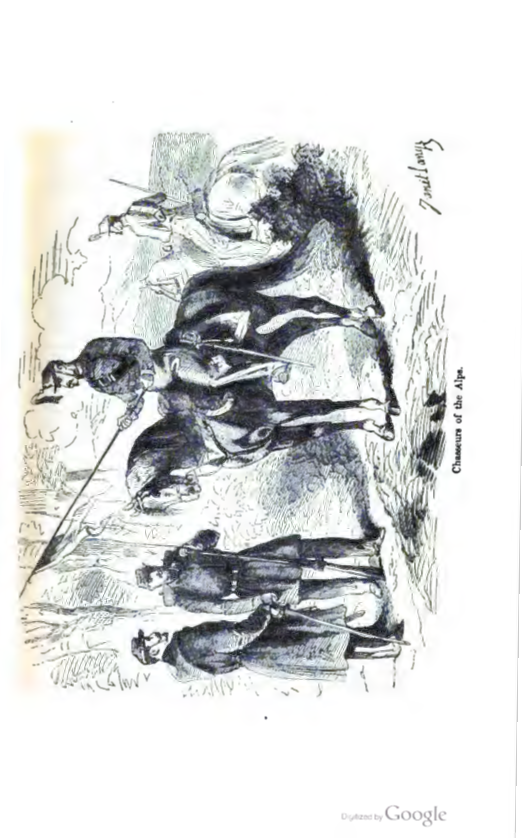