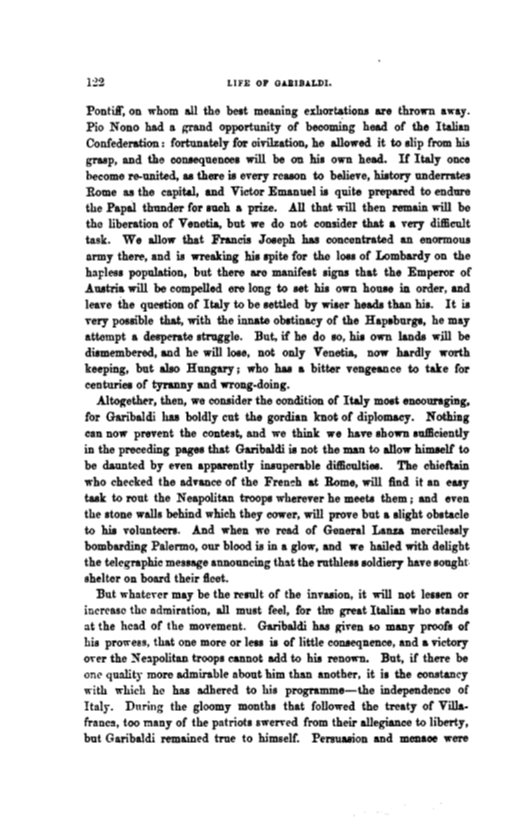 PontiE, on whom all the best meaning exhortations are thro11'11 away. Pio N ono had a grand opportunity of becoming head of the Italian Confederation: fortunately for oivilzation, he allowed it to slip from his grasp, and the consequences will be on his own head. If Italy once become re-united, as there is every reaaon to believe, history underrates Rome a.s the capital, and Victor Emanuel is quite prepared to endure the Pap1ml thunder for such a prize. All that will then remain will be the liberation of Venetia, but we do not consider that a very difficult task. 1;Ve allow that Francis Joseph has concentrated an enormous army there, and is wreaking his spite for the loss of Lombardy on the hapless population, but there aro mauifest signs that the Emperor of Austria will be compelled ere long to set his own house in order, and leave the question of Italy to be settled by wiser heads than his. It is Tery poe1sible that, with the innate obstinacy of the Hapsburgs, he may attempt a desperate struggle. But, if he do so, his own lands will be dismembered, and he will lose, not only Venetia, now hardly worth keeping,. but also Hungary; who baa a bitter vengeance to take for c enturies of tyranny and wrong-doing.

Altogether, then, we consider the condition of Italy most encouraging, for Garibaldi has boldly cut the gordian knot of diplomacy. Nothing can now prevent the contest, and we think we have shown sufficiently in the p1•eceding pages that Garibaldi is not the man to allow hitnself to be daunted by even apparently insuperable difficulties. The chieftain who checked the advance of the Freneh at Rome, will find it an easy task to the Neapolitan troops wherever he meets them ; and even the stonte walls behind which they cower, will prove but a slight obstacle to his And when we read of General Lanza mercile1111ly bombarcling Palermo, our blood is in a glow, and we hailed with delight the message announcing that the ruthless soldiery have sought shelter board their fleet.

But whnte'rer may be the result of the invasion, it will not lessen or increase the admiration, all must feel, for tlre great Italian who stands at the head of the movement. Garibaldi has gi'l"en &o many proofs of his prowess, that one more or less is of little consequence, and a victory O'l'cr the Neapolitan troops cannot add to his renown. But, if there be onr quality more admirable about him than another, it is the constancy w i th which he has adhered to his programme-the independence of Ita ly. ]During the gloomy months that followed the treaty of Villa­ franca, too many of the patriots swer'l'ed from their allegiance to liberty, but Garibaldi remained true to himself. Persuasion and menace were 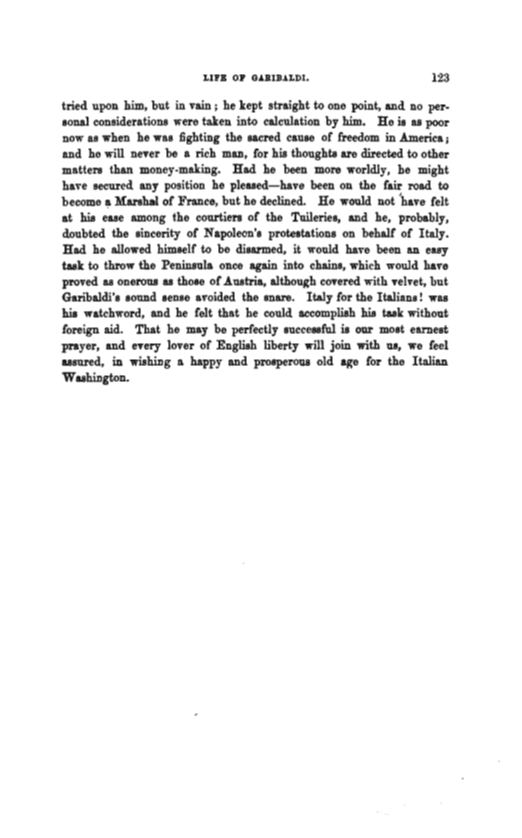 tried upon him, but in vain ; he kept straight to one point, and no per­ sonal considoerationa were taken into calculation by him. He is as poor now as whelit he was fighting the sacred cause of freedom in America l and he will never be a rich man, for his thoughts are directed to other matters than money-making. Had he been more worldly, he might have secured. any position he pleased-have been on the fair road to become a M:ushal of but he declined. He would not 'have felt at his ease among the courtiers of the Tnileries, and he, probably, doubted the sincerity of Napoleon's protestations on behalf of Italy. Had he allowed himself to be disarmed, it would have been an easy task to thro'w the Peninsula once again into chains, which would have proved as oiJterous as those of .Austria, although covered with velvet, but Garibaldi's 11ound sense avoided the snare. Italy for the Italians! was his watchword, and he felt that he could accomplish his task without foreign aid. That he may be perfectly successful is Olll' moat earnest prayer, and every lover of English liberty will join with us, we feel assured, in wishing a happy and prosperous old age for the Italian Washington .