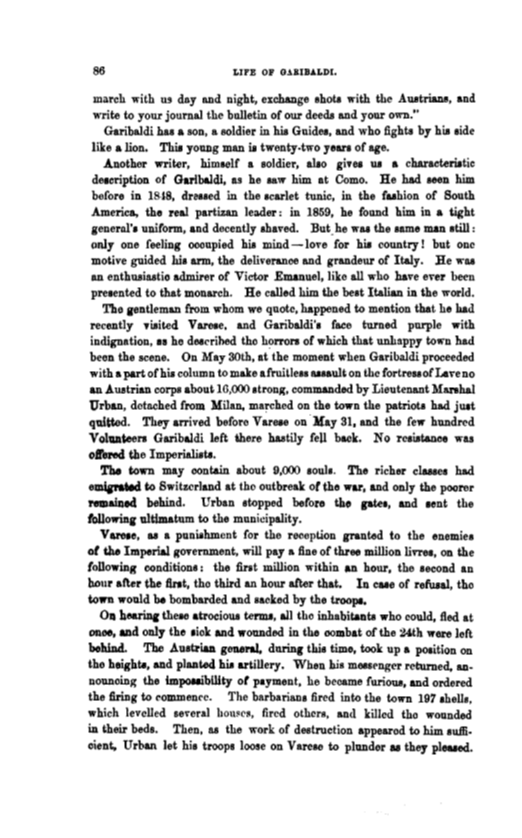 march with rn day and night, exchange shots with the Austrians, and

write to your journal the bulletin of our deeds and your own."

Garibaldi baa a son, a soldier in hiB Guides, and who fights by his side

like a lion, This young man is twenty-two years of age.

Ano1;her writer, himself a soldier, also gives us a characteristic

deacription of Garibaldi, as he sa.w him at Como. He had seen him

before in 18·i8, dressed in the scarlet tunic, in the fashion of South

only one feeling occupied his mind -love for hia country! but one

motive guided his arm, the deliverance and grandeur of Italy. He was

an enthusiastio admirer of Victor Emanuel, like all who have ever been

presented to that monarch. He called him the best Italian in the world.

The iiJentleman from whom we quote, happened to mention that he had recently l'isited Varesc, and Garibaldi's face turned purple with indignation, aa he described tho horrora of which that unhappy town had been the scene. On May 30th, at the moment when Garibaldi proceeded

&ll&ult on the fortress of LaYeno an Austrian corps about 16,000 strong, commanded by Lieutenant Marahal Urban, detached from Milan, marched on the town the patriots had juat quitted. They arrived before Varese on May 31, and the few hundred V Garibaldi left there hastily feU back. No resistance was ol'ered the Imperialiats.

The town may contain about 9,000 souls. The richer classes had eJiliirated to Switzerland at tho outbreak of the war, and only the poorer remainctd behind. Urban stopped before the gatea, and aent the following ultimatum to the municipality.

V are11e, as a punishment for the reception granted to the enemies of the Imperial government, will pay a fine of three million livrea, on the followi.Jng conditions : the first million within llD hour, the second an hour af1ter the tint, tho third an hour after that. In case of refusal, tho town would be bombarded and sacked by the troopa.

On h'Mrinr theac atrocious terma, all tho inhabitants who could, fled at once, a11d only the aiok and wounded in the combat of the 24th were left behind. The Auatrian gelUiral, during this time, took up a position on tho and planted hit artillery. When his measrngrr rrturned, an­ nouncing the impouibillty of payment, he became furious, and ordered the firix1g to commence. The barbarians fired into the wwn 197 shells, which levelled several houses, fired others, and killed the wounded in their beds. Then, as the work of destruction appeared to him suffi­ cient, Urban let his troops loose on V arese to plunder as they pleued. 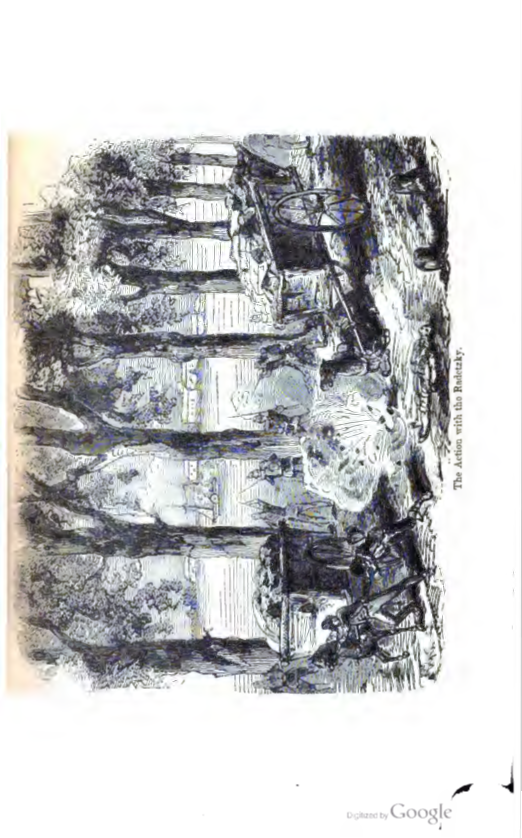