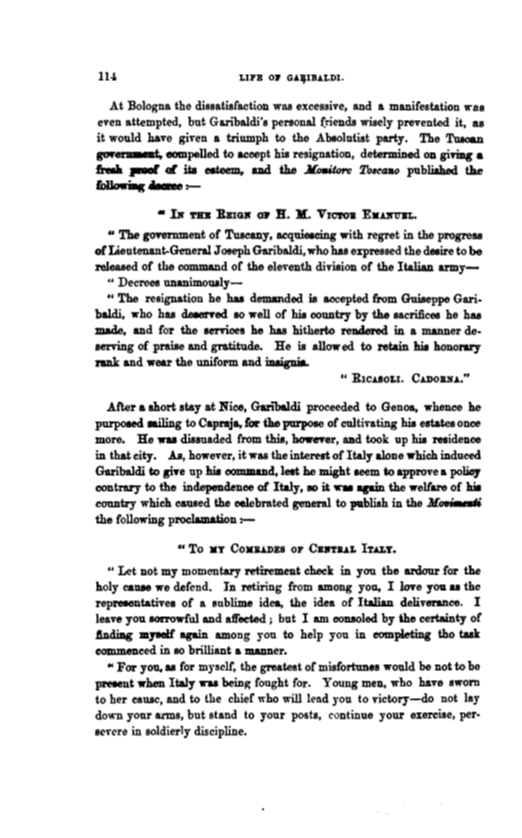 At Bologna the dissatisfaction was excessive, and a manifestation was even ILttempted, but G&ribaldi's personal (riends wisely prevented it, as it would have given a triumph to the Absolutist party. The Tnaoan eompelled to accept his resignation, determined on giviDg a !reM ,...,r oC iiB etteem, aDd the Xrw.ittwe To1cano publiahed the f'ollow:illg.....,:-­

• b 'l'Kll: 'REIGlf u H. ](.. Vroro11 EIU.lroBL. "The government of Tuseany, acquiescing with regret in the progress Lieutenant-General JosephGaribaldi, who has expressed the desire tohe of the comm&Dd of the eleventh division of the Italian army­ " Decrees unanimously­ " Tlile resignation he has demanded is accepted from Guiseppe Gari­ baldi, who has deeerved so well of his country by the sacrifices he baa made, and for the services he has hitherto rendered in a manner de­ serving of praise and gratitude. He is allowed to retain his honorary

AftE,r a short stay at Nice, GanDaldi proceeded to Genoa, whence he purpo1sed ailing to Capraja, for the purpose of cultivating his estates once more. He wu dissuaded from this, howeTer, and took up his residence in city. As, however, it was the interestofItaly alone which induced Garibludi to pn up his OODUIWld,leet he might seem to approve a policy

to the independence or Italy, 10 it1rM apin the welf&re of hia country which caused the celebrated general to publiah in the the following proclamation:-­

" not my momentary retirement check in you the ardour for the holy cause we defend. In retiring from among yoa., I love you u the repreeentatives of a sublime idea, the idea of Italian deliverance. I leave you IOlTOwful and affected ; but I am oon.soled by the certainty of mpel£ again among you to help you in completing tho task in so brilliant a manner.

" For you, aa for myself, the greatest of misfortunes would be not to bo pretent when Italy 1I"U being fought for. Young men, who have sworn to her cauac, and to the chief who will lend yon to victory-do not lay down your arms, but stand to your posts, continue your exercise, per· se¥ere in soldierly discipline. 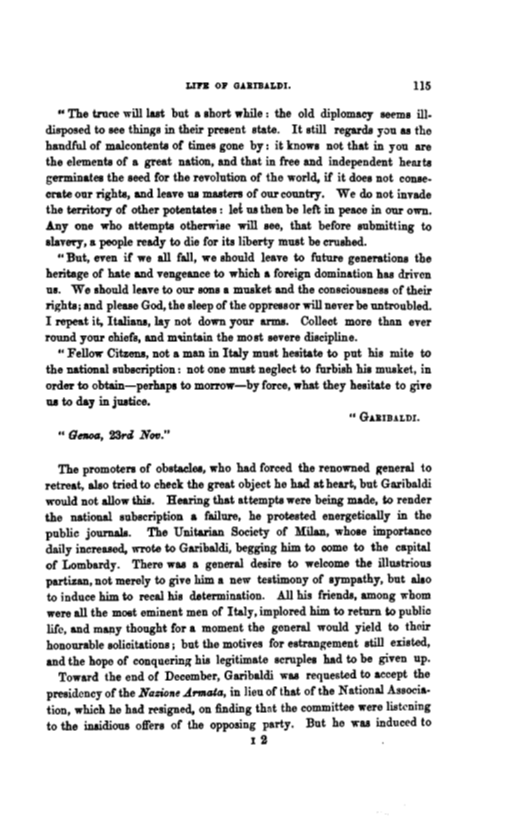 " The truce will last but a abort while : the old diplomacy seems ill­ disposed to see things in their present state. It still regards you as the handful of malc:ontenta of times gone by : it knows not that in you are the elements of a great nation, and that in free and independent helllta the seed for the revolution of the world, if it does not conse­ crate our rights, and leave ua masters of our country. We do not invade the territory of other potentates : lei ua then be left in peace in our own. Any one who attempts otherwise will see, that before submitting to slavery, a peopl·e ready to die for its liberty muat be crushed.

" But, even if we all fall, we should leave to future generations the heritage of bate: and vengeance to which a foreign domination has driven u11. We should leave to our sons a musket and the consciousness of their rights; and please God, the sleep of the oppressor willnever be untroubled. I repeat it, ItalianB, lay not down your arms. Collect more than ever round your chiefs, and m'lintain the most severe discipline.

" Fellow Citzeua, not a man in Italy must hesitate to put his mite to the national subscription : not one muat neglect to furbish his musket, in order to obtain--perhaps to morrow-by force, what they hesitate to give ua to day in justice.

The promoteJI'B of obstaeles, who bad forced the renowned general to retreat, also tried to check the great object he had atheart, but G!U'ibaldi would not allow· ibis. Hearing that attempts were being made, to render the national subscription a failure, he protested energetically in the public journals. The Unitarian Society of Milan, whose importance daily increased, wrote to Garibaldi, begging him to come to the capital of Lombardy. There was a general desire to welcome the illWitrious partizan, not mc!rely to give him a new testimony of sympathy, but also to induce him to recal his determination. All his friends, among whom were all the moat eminent men of Italy, implored him to return to public life, and many thought for a moment the general would yield to their honourable aoliclitations; but the motives for estrangement still existed, and the hope of conquering his legitimate scruples had to be given up. Toward the cmd o( December, Garibaldi was requested to accept the presidency of the Nazione A.rmata, in lieu of that of the N ntionnl Associa­ tion, which he had resigned, on finding thnt the committee were listening to the insidioue1 offers of the opposing party. But he was induced to

u. 1zedbyGooglc
Previous Page Next Page