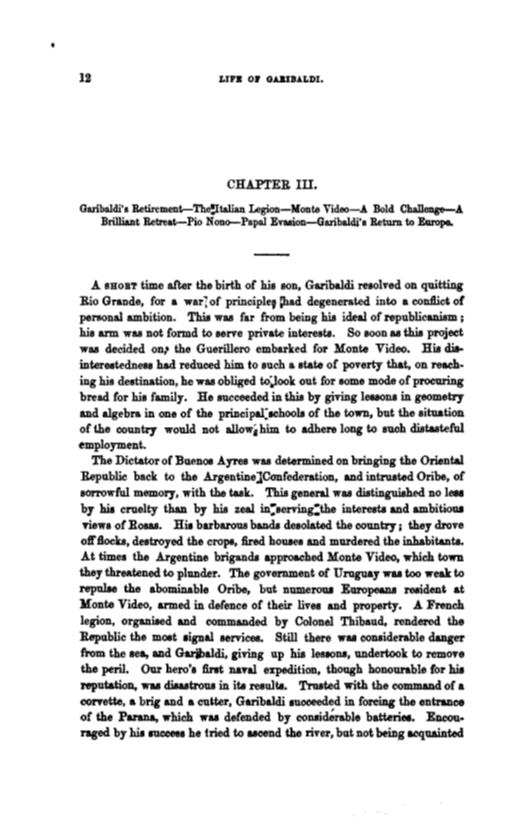 A. snonT time after the birth of his son, Garibaldi resolved on quitting Rio Grande, for a war1of degenerated into a conflict of personal :ambition. This was far from being his ideal of republicanism ; his arm "Ins not formd to serve private interests. So soon as this project was decided on,• the Guerillero embarked for Monte Video. His dia­ intereste(lness had reduced him to such a state of poverty that, on reach­ ing his dE,stination, he was obliged out for some mode of procuring bread for his family. He succeeded in this by giving lessons in geometry and algebra in one of the principal)chools of the town, but the situation of the country would not allowS. him to adhere long to such distasteful employm:ent.

The Dictator of Buenos Ayres wu determined on bringing the Oriental Republic back to the A.rgentineJConfederation, and intrusted Oribe, of sorrowful memory, with the task. This general was diatinguished no less by his Cli'Uelty than by his zeal in:serving:the interests and ambitions views of Rosas. His barbarous bands desolated the country ; they drove oft' flocks,. destroyed the crops, fired houses and murdered the inhabitants. At times the Argentine brigands approached Monte Video, which town they thre:11.tened to plunder. The government of Uruguay wu too weak to repulse the abominable Oribe, but numeroWI Europeans resident at Monte Video, armed in defence of their lives and property. A French legion, organised and commanded by Colonel Thibaud, rendered the Republic the most signal services. Still there wu considerable danger from the sea, and Garibaldi, giving up his lessons, undertook to remove the peril. Our hero's first nual expedition, though honourable for his reputation, wu diautrous in its results. Trusted with the command of & corvette, a brig and a cutter, Gan'baldi succeeded in forcing the entrance of the P:a.rana, which wu defended by batteriee. Encou­ raged by his success he tried to ascend the river, but not being acquainted 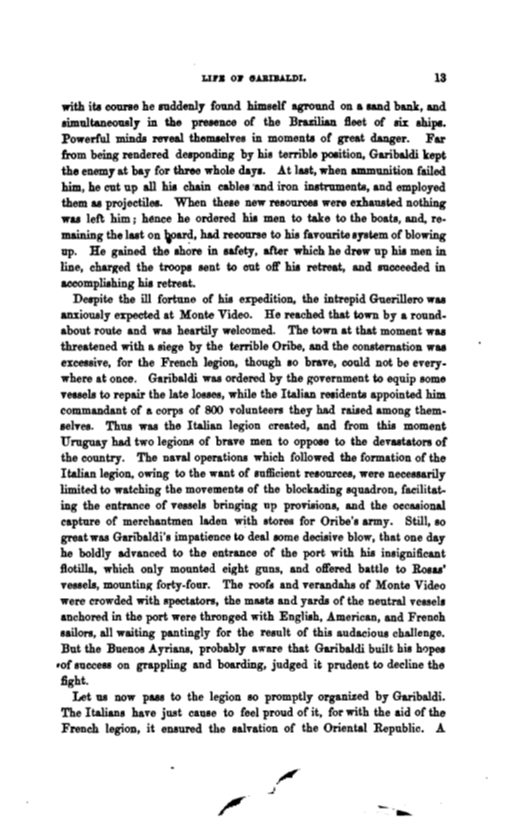 with its course he suddenly found himself' aground on a aand bank, and

aimultaneow1ly in the presence of' the Brazilian fleet of' six ships.

Powerful minds reveal themselves in moments of great danger. Far

from being rendered desponding by his terrible position, Garibaldi kept

the enemy at bay for three whole daya. At last, when ammunition failed

him, he cnt up all his chain cables ·and iron instnunents, and employed

them as proj<ectiles. When these new resources were exhausted nothing

was left him ; hllnce he ordered his men to take to the boats, and, re­

up. He gained the shore in safety, after which he drew up his men in

line, charged the troops sent to out off his retreat, and succeeded in

Despite the ill fortune of his expedition, the intrepid Guerillero was anxiously eXJ[>ected at Monte Video. He reached that town by a round­ about route and was heartily welcomed. The town at that moment was threatened lli.th a siege by the terrible Oribe, and the consternation was excessive, for the French legion, though so brave, coald not be every­ where at once. Garibaldi was ordered by the government to equip some vessels to re11air the late losses, while the Italian residents appointed him commandant of a corps of 800 volunteers they had raised among them­ selves. Th1111 was the Italian legion created, and from this moment Uruguay ha<L two legioDR of brave men to oppose to the devastators of' the country. The naval operations which followed the formation of the Italian legion, ol!i.ng to the want of' sufficient resources, were necessarily limited to wa.tching the movements of the blockading squadron, facilitat­ ing the entrance of vessels bringing np provisions, and the occasional capture of merchantmen laden with stores for Oribe's army. Still, so great was Garibaldi's impatience to deal some decisive blow, that one day he boldly advanced to the entrance of the port with his insignificant flotilla, which only mounted eight guns, and offered battle to Rosas' vessels , mow1ting forty-four. The roofoJ and verandahs of Monte Video were crowded with spectators, the masts and yards of the neutral vessels anchored in the port were thronged with English, American, and French sailors, all w1Liting pantingly for the result of this audacious challenge. But the Buenos Ayrians, probably aware that Garibaldi built his hopes

OIIL grappling and boarding, judged it prudent to decline the

Let us no·w pass to the legion so promptly organized by Garibaldi.

The Italians have just cause to feel proud of it, for with the aid of the

French legion, it ensured the salvation of the Oriental Republic. A
Previous Page Next Page