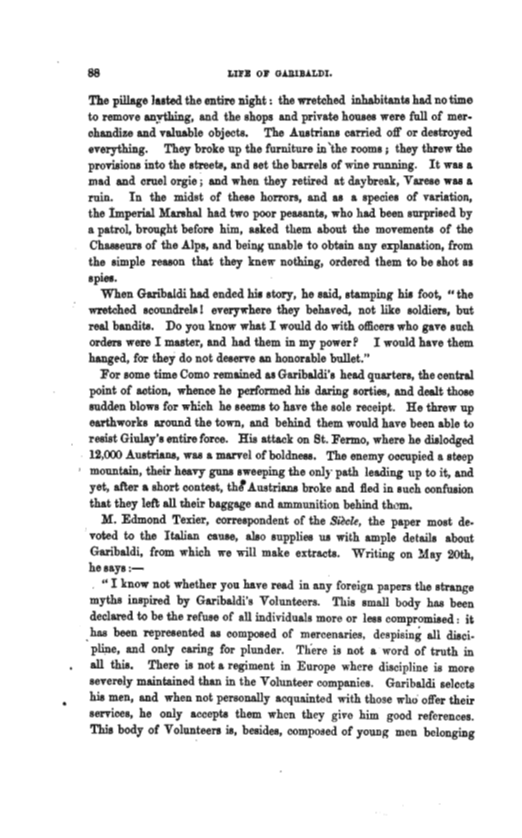 The pillage lasted the entire night : the wretched inhabitants had no time to remove anything, and the shops and private houses were full of mer­ chandize and valuable objects. The Austrians carried off or destroyed everything . They broke up the furniture in 'the rooms ; they threw the provisions into the streets, and set the barrels of wine running. It was a mad and cruel orgie i and when they retired at daybreak, V arese was a ruin. In the midst of these horrors, and as a species of variation, the imperial Marshal had two poor peasants, who had been surprised by a patrol, brought before him, asked them about the movements of the Chasseurs of the Alps, and being unable to obtain any explanation, from the simple reason that they knew nothing, ordered them to be shot as spies.

When Garibaldi had ended his story, he said, stamping his foot, "the wretched acoundrelR I everywhere they behaved, not like soldiers, but real bandits. Do you know what I would do with officers who gave such orders were I master, and had them in my power P I would have them hanged , for they do not deserve an honorable bullet."

For some time Como remained as Garibaldi's head quarters, the central point of action, whence he performed his daring sorties, and dealt those sudden blows for which he seems to have the sole receipt. He threw up earthworks around the town, and behind them would have been able to resist Giulay's entire force. His attack on St. Fermo, where he dislodged 12,000 Austrians, was a marvel of boldness. The enemy occupied a steep

mountain, their heavy guns sweeping the only path leading up to it, and yet, after a short contest, thlAustrians broke and fled in such confusion that they left all their baggage and ammunition behind

. voted to the Italian cause, also supplies us with ample details about Garibaldi, from which we will make extracts. Writing on May 2oth, he says:­

" I know not whether you have read in any foreign papers the strange myths inspired by Garibaldi's Volunteers. This small body has been declared to be the refuse of all individuals more or less compromised : it

. has been represented as compose

of mercenaries, despising all diaci­ plixle, and only caring for plunder. Tliere is not a word of truth in all this. There is not a regiment in Europe where discipline is more severely maintained than in the Volunteer companies. Garibaldi selects his men, and when not personally acquainted with those who offer their services, he only accepts them when they givo him good references. This body of Volunteers is, besides, composed of young men belonging 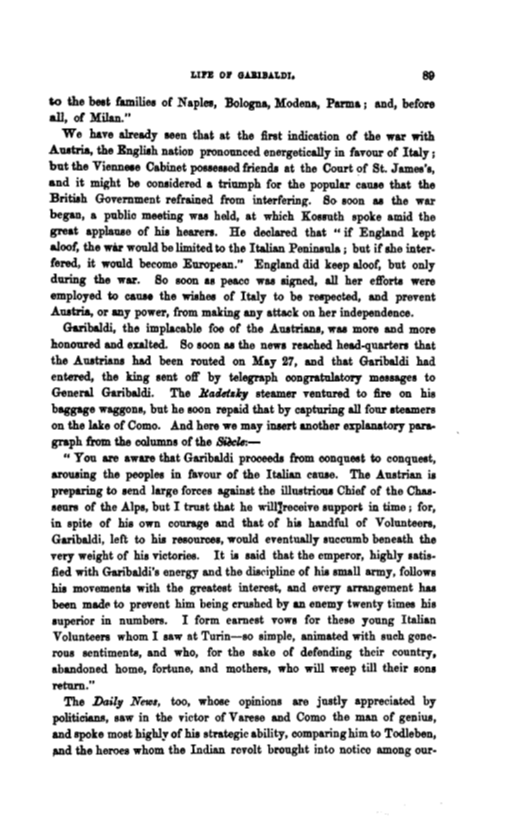 \o the beet fa1nilies of Naples, Bologna, Modena, Parma i and, before all, of Milan."

We have already seen that at the first indication of the war with Austria, the EJo.glish natioD pronounced energetically in favour of Italy; but the ViennEIIe Cabinet posseseed friend& at the Court of St. James's,

and it might be considered a triumph for the popular cause that the British Government refrained from interferiDg. So soon aa the war began, a public meeting waa held, at which Kossuth spoke amid the great applauso of hie hearers. He declared that " if England kept aloof, the war ·would be limited to the Italian Peninsula ; but if she inter­ fered, it would become European." England did keep aloof, but only during the So soon as peace waa signed, all her efforts were employed to 1:ause the wishes of Italy to be respected, and prevent Austria, or any power, from making any attack on her independence.

Garibaldi, the implacable foe of the Austriane, waa more and more honoured and exalted. So soon aa the news reached head-quarters that the Austrians had been routed on May 27, and that Garibaldi had entered, the llr.ing sent off by telegraph congratulatory messages to Gi!neral Garibaldi. The Radlrtd:y steamer ventured to fire on his baggage waggc>ns, but he soon repaid that by capturing all four steamers on the lake of Como. And here we may insert another explanatory para­ graph from columns of the SiecW.­

ILW&re that Garibaldi proceeds from conquest to conquest, arousing the peoples in favour of the Italian cause. The Austrian is preparing to s•end large forces against the illustrious Chief of the Chas­ seurs of the .AJps, but I trust that he willireceive support in time; for, in spite of his own courage and that of his handful of Volunteers, Garibaldi, left to his resources, would eventually succumb beneath the very weight of his victories. It is said that the emperor, highly satis­ fied with Garibaldi's energy and the discipline of his small army, follows hie movementu with the greatest interest, and every arrangement baa been madE! to prevent him being crushed by an enemy twenty times his superior in numbers. I form earnest vows for these young Italian Volunteers whom I saw at Turin-so simple, animated with such gene­ rous sentiments, and who, for the sake of defending their country, abandoned home, fortune, and mothers, who will weep till their sons return."

The Daily New1t, too, whose opinions are justly appreciated by

politicians, saw in the victor of V arese and Como the man of genius,

and spoke most highly of his strategic ability, comparing him to Todleben,

u. 1 zedbyGooglc
Previous Page Next Page