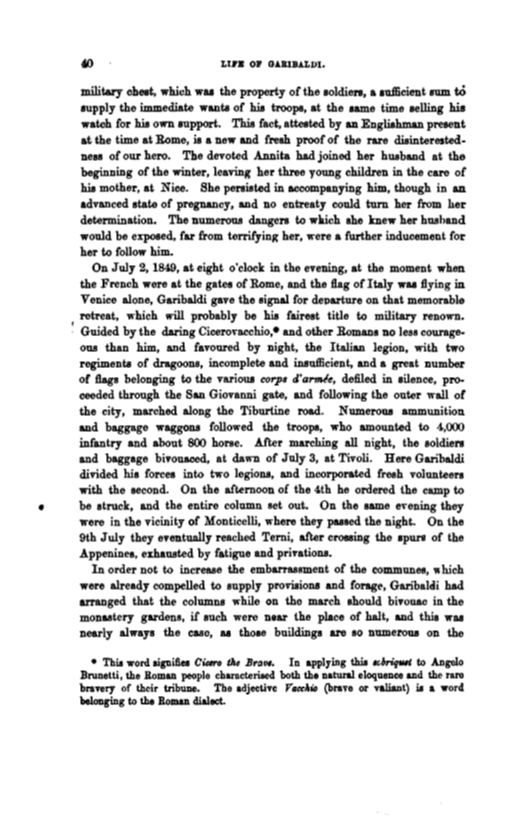 military 'oheat, which was the property of the soldiers, a sufficient sum tO supply the immediate wants of his troops, at the aame time selling his watch his own support. This fact, attested by an Engliahman present at the th:J[le at Rome, is a new and fresh proof of the rare disinterested­ ness of our hero. The devoted Annita had joined her husband at the beginning· of the winter, leaving her three young children in the care of his mothl,r, at Nice. She persisted in accompanying him, though in an advanced state of pregnancy, and no entreaty could turn her from her determination. The numerous dangers to w.lllch she knew her hushand would be exposed, far from terrifying her, were a further inducement for her to follow him.

On July 2, 1849, at eight o'clock in the evening, at the moment when the French were at the gates of Rome, and the flag of Italy was flying in Venice alone, Garibaldi gave the signal for devarture on that memorable

, retreat, which will probably be his fairest title to military renown. Guided by the daring Ciceroncchio,• and other Romans no less courage­ ous than him, and favoured by night, the Italian legion, with two regimenllt of dragoons, incomplete and insufficient, and a great number of flags belonging to the various corps d'armltJ, defiled in silence, pro­ ceeded through the San Giovanni gate, and following the outer wall of the city, marched along the Tiburtine road. Numerous ammunition and waggons followed the troops, who amounted to 4,000 infantry and about 800 horse. After marching all night, the soldiers and bivonaced, at dawn of July 3, at Tivoli. Here Garibaldi divided his forces into two legions, and incorporated fresh volunteers with the second. On the afternoon of the 4th he ordered the camp to

e be struck, and the entire column set out. On the same el"ening they were in the vicinity of Monticclli, where they passed the night. On the 9th July they eventually reached Terni, after croBBing the spurs of the AppeninE!S, exhausted by fatigue and privations. In order not to increase the embarrassment of the communes, '1'1 hich were alrE!ady compelled to supply provisions and forage, Garibaldi had arranged that the columns while on tho march should bivouac in tho monastery gardens, if such were near the place of halt, and this was nearly always the case, as those buildings are so numerous on the

• This ·word aignifiea Ciuro tla1 Brav1. In applying thia to Angelo Brunetti, t.he Roman people charnctcriaed both the natural eloquence and the raro bravery of their tribune. The adjecl.ivc Vacchio (brave or valiant) is a word belonging to the Roman dialect. 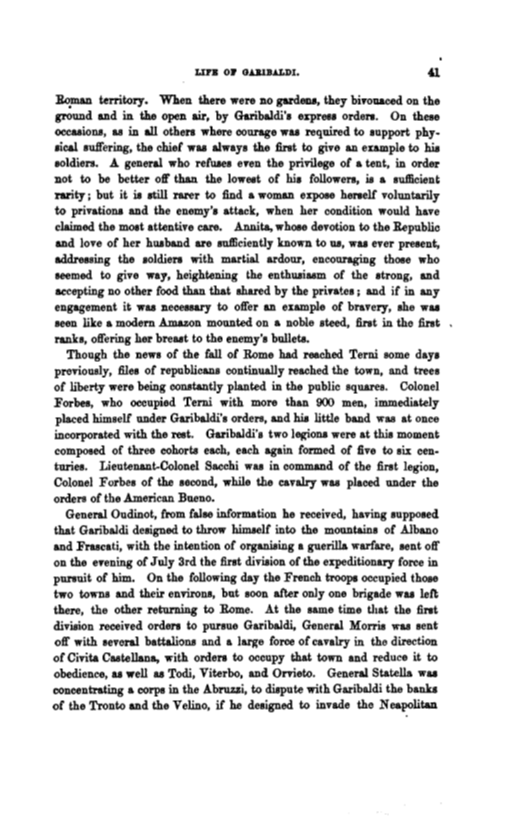 territ<()ry, When there were no gardens, they bivouaced on the ground and il11. the open air, by Garibaldi's express orders. On these occasions, as m all others where courage was required ro aupport phy­ aica.I suffering, the chief was always the first to give an example ro his soldiers. A who refuses even the privilege of a tent, m order not ro be better off' than the lowest of his followers, is a sufficient rarity; but it is still rarer ro find a woman expose herself voluntarily to privations and the enemy's attack, when her condition would have claimed the most attentive care. A.nnita, whose devotion ro the Republic and love of her husband are sufficiently known to us, was ever present, addressing the aoldiers with martial ardour, encouraging those who seemed to give way, heightening the enthusiasm of the strong, and accepting no c•ther food than that shared by the privates ; and if m any engagement was necessary ro offer an example of bravery, she was seen like a modem .Amazon mounted on a noble steed, first m the first ranks, her breast to the enemy's bullets.

Though thEI news of the fall of Rome had reached Terni some days previously, files of republicans contmually reached the town, and trees of liberty were being constantly planted m the public squares. Colonel Foroes, who occupied Terni with more than 900 men, immediately placed himself under Garibaldi's orders, and his little band was at once incorporated with the rest. Garibaldi's two legions were at this moment composed of three cohorts each, each again formed of five ro six cen­ turies. Lieutenant-Colonel Sacchi was in command of the first legion, Colonel F orbl)S of the second, while the cavalry was placed under the orders of the American Bueno.

General Ou,dinot, from false mformation he received, having supposed that Garibaldi designed to throw himaelf into the mountains of Albano and Frascati, with the intention of organising a guerilla warfare, sent off on the evening of .July 3rd the first division of the expeditionary force m pursuit of him. On the following day the French troops occupied those two towns and their environs, but soon aft<er only one brigade was lefl; there, the other returning to Rome. At the same time that the first division receind orders to pursue Garibaldi, General Morris was sent off with seveJ'Sl battalions and a large force of cavalry in the direction of Civita with orders ro occupy that town and reduce it ro obedience, as 'Well as Todi, Viterbo, and Orrieto. General Stat<ella was concentrating a corps m the Abruzzi, ro disput<e with Garibaldi the banks of the Tronto and the V elino, if he designed ro mvade the Neapolitan