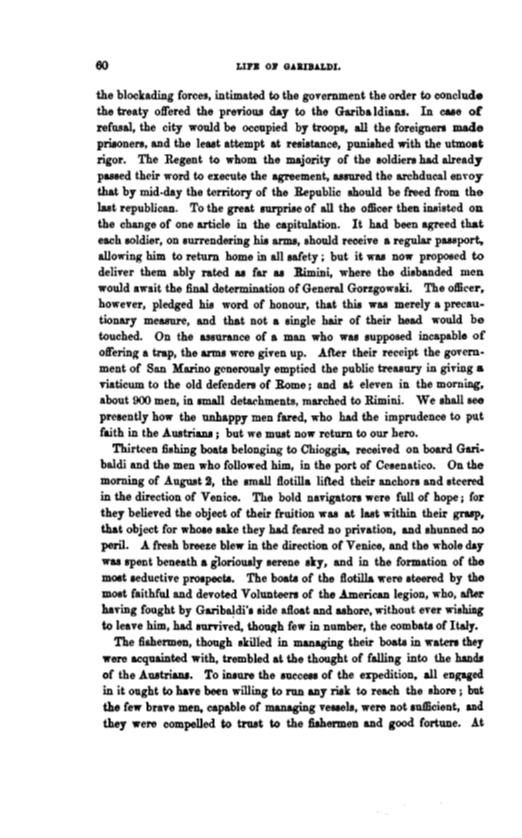 the blockading forces, intimated to the government the order to conclude the o11'ered the previous day to the Ga.riba ldians. In case or refusal, the city would be occupied by troops, all the foreigners made prison.ers, and the leut attempt at resistance, punished with the utmost rigor. The Regent to whom the majority of the eoldiers had already pused their word to execute the agreement, assured tho archducal enYoy that by mid-day the territory of the Republic should be freed from the lut rc!publican. To the great surprise of all the officer then insisted oo. the change of one article in the capitulation. It had been agreed that each 11oldier, on surrendering his arms, should receive a regular passport, allowing him to return home in all safety ; but it wu now proposed to deliver them ably rated as far as Rimini, where the disbanded meo. wouldl await the final determination of General Gorzgowski. The officer, howe,rer, pledged his word of honour, that this was merely a precau­ tionB.l'Y measure, and that not a single hair of their head would be touched. On the assurance of a man who was supposed incapable of o11'ering a trap, the arms were given up. After their receipt the govern­ ment of San Marino generously emptied the public treasury in giving a viaticum to the old defenders of Rome; and at eleven in the morning, about' 900 men, in small detachments, marched to Rimini. 'Ve shall see prcseutly how the unhappy men fared, who had the imprudence to put faith in the Austrians ; but we must now return to our hero.

Thirteen fishing boats belonging to Chioggia, received on board Gari­ baldi and the men who followed him, in the port of Cesenatico. On the morning of August 2, the small flotilla lifted their anchors and steered in direction of Venice. The bold navigators were full of hope; for they believed the object of their fruition was at last within their grasp, that object for whose sake they had feared no privation, and shunned no peril.. A fresh breeze blew in the direetion of Venice, and the whole dsy was 11pent beneath a g'loriously serene sky, and in the formation of the most seductive prospects. The boats of the flotilla were steered by the most faithful and devoted Volunteers of the American legion, who, after having fought by Garibaldi's side afloat and ashore, without ever wishiag to leiLve him, had survived, though few in number, the combats of Italy.

Th.e fishermen, though skilied in managing their boats in waters they were acquainted with, trembled at the thought of falling into the hands of the AustrianJ. To insure the success of the expedition, all engaged in it ought to have been willing to run any risk to reach the shore ; but the few brave men, capable of managing veaaele, were not sufficient, and they were compelled to trust to the fishermen and good fortune. At 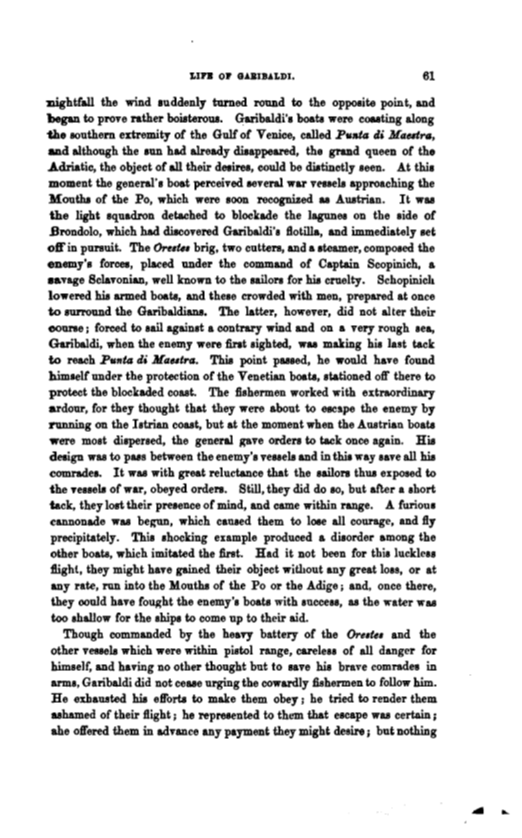 Dightfall the 1win.d auddenly turned round to the opposite point, and began to prove rather boisteroua. Garibaldi's boats were coasting along t.he southern eJrtremity of the Gulf of Venice, called Pu11ta di Mautra, and although the sun had already disappeared, the grand queen of the .Adriatic, the object of all their desires, could be distinctly seen. At this moment the general's boat perceived several war vessels approaching the Mouths of the Po, which were soon recognized as Auatrian. It was the light squ11dron detached to blockade the lagunes on the side of Brondolo, had discovered Garibaldi's flotilla, and immediately set off in pursuit. The Ore•t6• brig, two cutters, and a steamer, composed the enemy's forcee1, placed under the command of Captain Scopinich, a eavage Sclavonian, well known to the sailors for his cruelty. Schopinich lowered his anned boats, and these crowded with men, prepared at once to surround Garibaldiana. The latter, however, did not alter their course ; forced to aail against a contrary wind and on a very rough sea, Garibaldi, when the enemy were first sighted, was making his last tack to reach Punt.r1 di Mae•tra. This point passed, he would have found himself under the protection of the Venetian boats, stationed off there to protect the blockaded coast. The fishermen worked with extraordinary ardour, for they thought that they were about to escape the enemy by running on the Istrian coast, but at the moment when the Auatrian boats were most dispersed, the general gave orders to tack once again. His design was to llBBS between the enemy's vessels and in this way save all his comrades. It was with great reluctance that the sailors thua exposed to the vessels of1rar, obeyed orders. Still, they did do so, but afler a short tack, they lost their presence of mind, and came within range. A furious cannonade wan begun, which caused them to loae all courage, and fly precipitately. This shocking example produced a disorder among the other boats, which imitated the first. Had it not been for this luckless flight, they might have gained their object without any great loss, or at

any rate, run into the Mouths of the Po or the Adige; and, once there, they oou1d hav·e fought the enemy's boats with success, as the water was too shallow the ships to come up to their aid.

Though commanded by the heavy battery of the Ore•k• and the other vessels ·which were within pistol range, careless of all danger for himself, and huving no other thought but to save his brave comrade& in arms, Garibaldi did not cease urging the cowardly fishermen to follow him. He exhausted his efforts to make them obey ; he tried to render them ashamed of th1!ir flight ; he represented to tht!m that escape was certain ; ahe offered thE1m in advance any payment they might desire ; but nothing