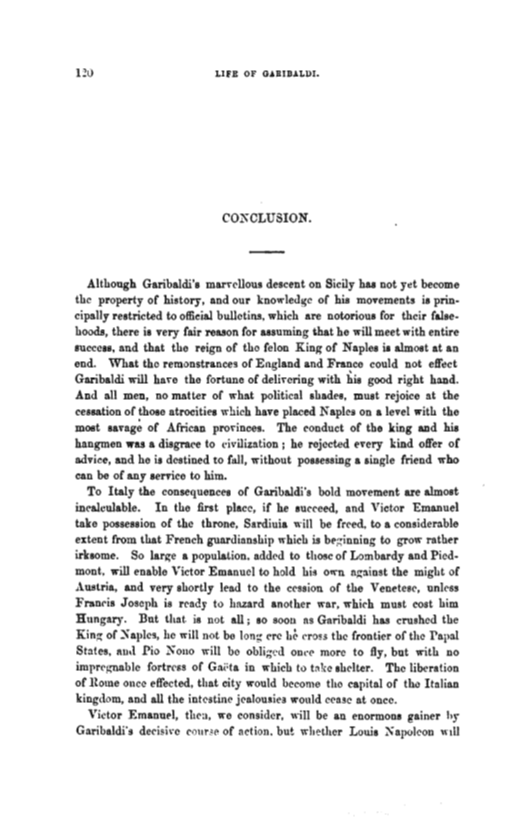 .Although Garibaldi's mar;rllous descent on Sicily has not yt!t become the property of history, and our knowledge of his movements is prin­ cipally restricted to offieia.l bulletins, which are notorious for their false­ hoods, there is very fair reason for assuming that he will meet with entire success, and that the reign of tho felon King of Naples is a.lmost at an end. What tho remonstrances of England and France could not effect Garibaldi will ha;o the fortune of with his good right hand . .And all men, no matter of what political shades, must rejoice at the cessation <,f those atrocities which have placed N a.plcs on a level with the most of African pro;inces. The conduct of the king and his hangmen •was a disgrare to eivilization ; be rejected e;ery kind offer of advice, and he is destined to full, without possessing a single friend who can be of any service to him.

To Italy the consequences of Garibaldi's bold movement are a.lmost inca.lculable. In the first place, if he sueceed, and Victor Emanuel take possession of the throne, Sardinia will be freed, to a considerable extent from that French guardianship which is to grow rather irksome. So a population. add('d to those of Lombardy and Pied­ mont, wiUl enable Victor Emanuel to hold his own the might of Austria, very shortly lend to the cession of the Venetes(', unl<'ss :Francis Joseph is rendy to hazard another war, which must cost him Hungary. But that. is not all; so soon ns Garibaldi ha.s crushed the King of Xaplcs, he will not be <'l'<' he eross the frontier of the Papal States, nu.l Pio :Nono will bo oblig-c•d out•(' more to lly, but with no impr<'"nable fortress of Gai;ta in which tv take shelter. The liberation of Home once effected, that city would become tho capital of tho Italian kingd om, nnd all the intestine jcnlousie3 would C('ase at once.

Vi cto r Emanuel, tl1ea, we consider, will be an enormous gainer hy Garibaldi ' s dccisi\·e eour.<C' of action . but whether Louis X npolcon will 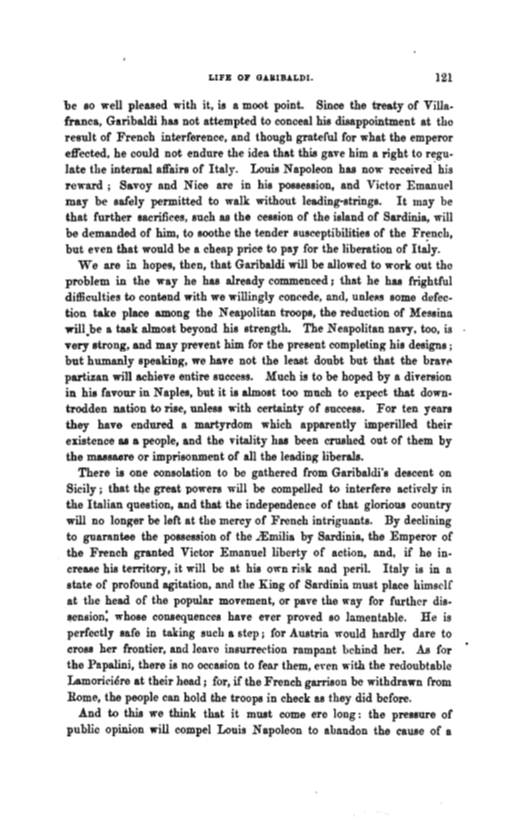 be so well pleased with it, is a moot point. Since the treaty of Villa­ franca, Garibaldi has not attempted to conceal his disappointment at the result of French interference, and thongh grateful for what the emperor effec.ted, he could not endnre the idea that this gave him a right to regu­ late the intllrnal affairs of Italy. Louis Napoleon has now received . his reward ; S:11.voy and Nice are in his possession, and Victor Emanuel may be saiely permitted to walk without leading-strings. It may be that furthe:r sacrifices, such as the cession of the island of Sardinia, will be demandE1d of him, to soothe the tender susceptibilities of the but even that would be a cheap price to pay for the liberation of Italy.

We are iin hopes, then, that Garibaldi will be allowed to work out the problem in the way he has already commenced ; that he has frightful difficulties tc contend with we willingly concede, and, uoleAs some defec­ tion take place among the Neapolitan troops, the reduction of Messina will.be a tw1k almost beyond his strength. The Neapolitan navy, too, is very strong, and may prevent him for the present completing his designs ; but humanly speaking, we have not the least doubt but that the bravl' partizan will achieve entire success. Much is to be hoped by a diversion in his favolllr in Naples, but it is almost too much to expect that down­ trodden nation to rise, unless with certainty of success. For ten years they have endured a martyrdom which apparently imperilled their existence u a people, and the vitality has been crushed out of them by the massaore or imprisonment of all the leading liberals.

There is one consolation to be gathered from Garibaldi's descent on Sicily ; that t4e great powers will be compelled to interfere acti,·cly in the Italian question, and that the independence of that glorious country will no longer be left at the mercy of French intriguants. By declining to guarantE1e the possession of the .1Emilia by Sardinia, the Emperor of the French granted Victor Emanuel liberty of action, and, if he in­ crease his t'erritory, it will be at his own risk and peril. Italy is in a state of profound agitation, and the King of Sardinia must place himself at the hcadl of the popular movE'ment, or pave the way for further dis­ sension: whose consequences have ever proved so lamentable. He is perfectly safe in taking such a step; for Austria would hardly dare to cross her frontier, and leal·e insurrect-ion rampant behind her. As for the Papalini, there is no occasion to fen.r them, el·cn with the redoubtable LamoriricrE' at their head ; for, if the French garrison be withdrawn from Rome, the people can hold the troops in check as they did before.

And to this we think that it must come ere long: the pressure of

u. :izedbyGoogle
Previous Page Next Page