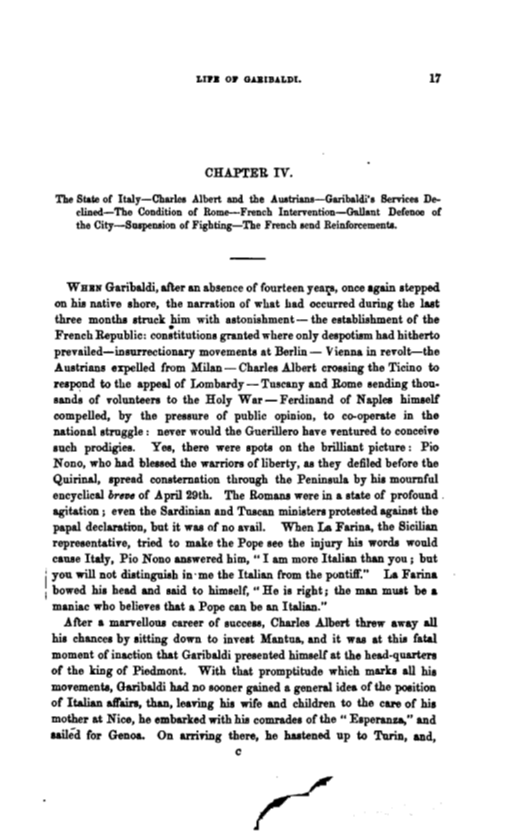 WHBN Garibaldi, after an absence of fourteen yea\s, once again stepped on his native shore, the narration of what had occurred during the last three months struck him with astonishment-the establishment of the French Repul•lic: con:titutions granted where only despotism had hitherto prevailed-in11nrrectionary movements at Berlin-Vienna in revolt-the Austrians expelled from Milan-Charles Albert crossing the Ticino to to tho appeal of Lombardy-Tuscany and Rome sending thou­ sands of volunteers to the Holy War-Ferdinand of Naples himself compelled, by the pressure of public opinion, to co-operate in the national struggle : never would the Guerillero have ventured to conceive such prodigies. Yes, there were spots on the brilliant picture : Pio N ono, who had blessed the warriors of liberty, as they defiled before the Quirinal, sprc!ad consternation through the Peninsula by his mournful encyclical of April 29th. The Romans were in a state of profound . agitation; even the Sardinian and Tuscan ministers protested against the papal declaratron, but it was of no avail. When La Farina, the Sicilian representative, tried to make the Pope see the injury his words would cause Italy, Pio Nono answered him," I am more Italian than you; but

you will not distinguish in ·me the Italian from the pontiff." La Farina 1 bowed his and said to himself, " He is right; the man must be a mania c who that a Pope can be an Italian."

After a marvellous career of succeBB, Charles Albert threw away all his chances by sitting down to invest Mantua, and it was at this fatal moment of in&ction that Garibaldi presented himself at the head-quarters of the king of Piedmont. With that promptitude which marks all his movements, Garibaldi h&d no sooner gained a general idea of the poeition of Italian aft'ain, than, leaving his wife and children to the care of his mother at he embarked with his comrades of the" Eaperanza," and sailed for GeliLoa. On arriving there, he hastened up to Turin, and, 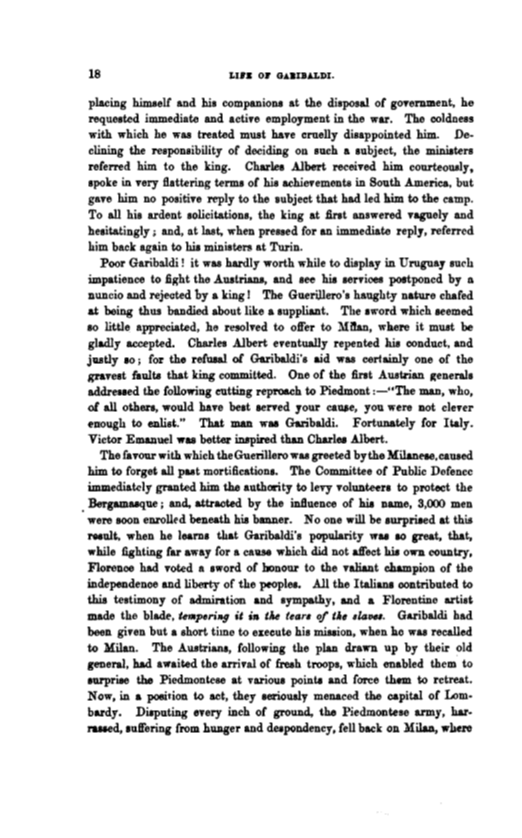 placing himself and his companions at the disposal of government, he

request.ed immediate and active employment in the war.

with wlilich he was treated must have cruelly disappointed him. De­

clining the responsibility of deciding on such a subject, the ministers

referred him to the king. Charles Albert received him courteously,

spoke in very fiattering terms of his achievements in South America, but

gave him no positive reply to the subject that had led him t.o the camp.

To all his ardent solicit.ations, the king at .first answered vaguely and

hesit.atilllgly; and, at last, when pressed for an immediate reply, referred

Poor Garibaldi! it was hardly worth while t.o display in Uruguay such

impatience to fight the Austrians, and see his servioes postponed by a

nuncio :11.nd rejected by a king I The GuerUlero's haughty nature chafed

at being thus bandied about like a suppliant. The sword which seemed

so littlE: appreciated, he resolved t.o offer t.o Mi!an, wh.ere it must be

justly 110; for the refusal of Garibaldi's aid was certainly one of the

gravest faults that king committed. One of the first Austrian generals

addresa,ed the following cutting reproach t.o Piedmont :-" The man, who,

of all others, would have best served your ca1ae, you were not clever

enough t.o enlist." That man was Garibaldi. Fortunately for Italy.

The fitvour with which theGuerillero was greeted bythe Milanese, caused

him to forget all past mortifications. The Committee of Public Defence immediiltcly granted him the authority t.o levy volunteers t.o protect the . Bergamaaque ; and, attracted by the inlluence of his name, 3,000 men were soon enrolled beneath his banner. No one will be surprised at this reault, when he learns that Garibaldi's popularity was ao great, that, while fighting far away for a cause which did not affect his own country, Florence had voted a sword of honour to the valiant champion of the independence and liberty of the peoples. All the Italians oontributed t.o this testimony of admiration and sympathy, and a Florentine artist made the blade, tempering it in the tear• of tAe alaou. Garibaldi had been given but a short time t.o exccut.e his mission, when he was recalled

t.o Milan. The Austrians, following the plan drawn up by their old general, had awaited the arrival or Creah troops, " 'hich enabled them to surpriaet the Piedmontcae at vo.rioua points and force them to retreat. Now, in a position t.o act, they seriously menaced the capital of Lom­ bardy. Disputing every inch of ground, the Piedmontese army, har­ raaaed, uuffering from hunger and deapondeucy, fell back on Milan, where