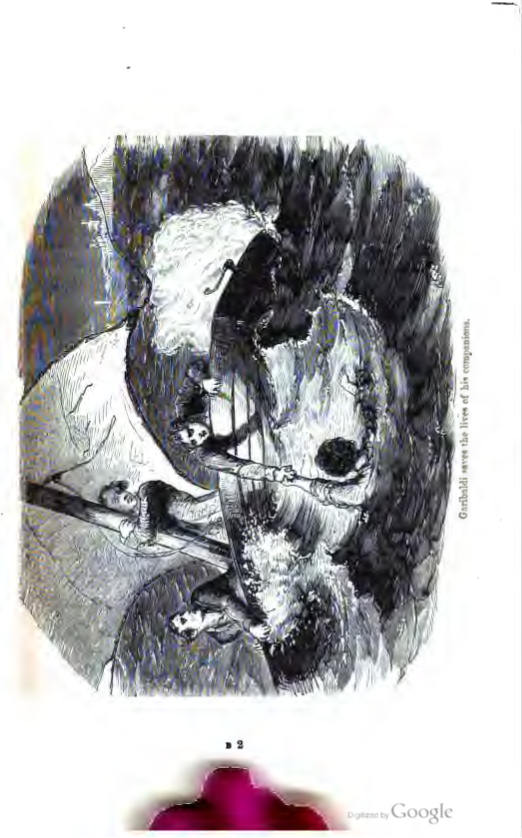 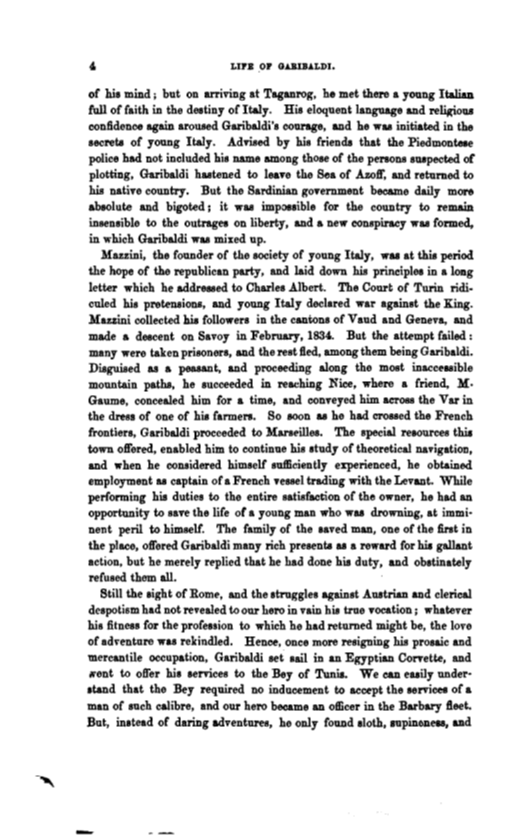 of his mind ; but on arriving at Taganrog, he met there a young Italian full of faith in the destiny of Italy. His eloquent language and religious confidence again aroused Garibaldi's courage, and he was initiated in the secrets of young Italy. Advised by his friends that the Piedmonteae police had not included his name among those of the persons suspected of plotting, Garibaldi hastened to leave the Sea of Azoff, and returned to his native country. But the Sardinian government became daily more and bigoted ; it was impossible for the country to remain insensible to the outrages on liberty, and a new conspiracy was formed, in which Garibaldi was mixed up.

Mauini, the founder of the society of young Italy, was at this period the hope of the republican party, and laid down his principles in a long letter he addressed to Charles Albert. The Court of Turin ridi­ culed bis pretensions, and young Italy declared war against the King. Mazzini collected his followers in the cantons of V aud and Geneva, and made a. descent on Savoy in February, 1834. But the attempt failed: many were taken prisoners, and the rest fled, among them being Garibaldi. Disguised as a peasant, and proceeding along the most inaccessible mountain paths, he succeeded in reaching Nice, where a friend, M· Gaume, concealed him for a time, and conveyed him across the V ar in the dre11s of one of his farmers. So soon as he had crossed the French frontiers, Garibaldi proceeded to Marseilles. The special resources this town ofrered, enabled him to continue his study of theoretical navigation, and when he considered himself sufficiently experienced, he obtained employment as captain ofa French vessel trading with the Levant. While performing his duties to the entire satisfaction of the owner, he had an opportunity to save the life of a young man who was drowning, at immi­ nent to himself. The family of the saved man, one of the first in the pl&<:e, offered Garibaldi many rich presents as a reward for his gallant action, but he merely replied that he had done his duty, and obstinately refused them all.

Stillllhe sight of Rome, and the struggles against Austrian and clerical despotil ; m had not revealed to our hero in vain his true vocation; whatever his fitness for the profession to which he had returned might be, the love of adventure was rekindled. Hence, once more resigning his prosaic and mercantile occupation, Garibaldi set sail in an Egyptian Corvette, and .vent t<1 offer his services to the Bey of Tunis. We can easily under· stand that the Bey required no inducement to accept the services of a man of such calibre, and our hero became an officer in the Barbary fleet. But, of daring adventures, he only found aloth, aupineness, and

u. 1zedbyGooglc
Previous Page Next Page